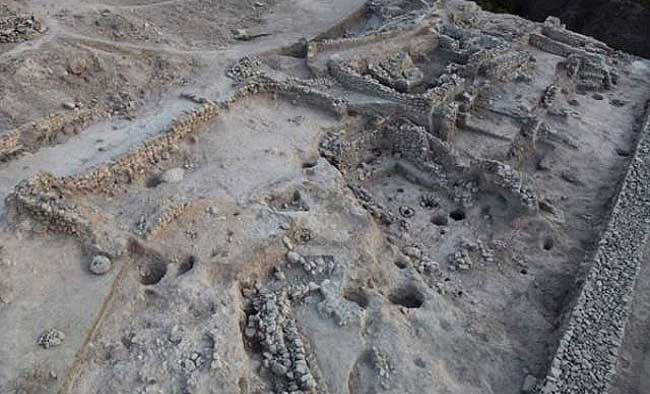 Archaeological excavations carried out at the site of La Bastida (Totana, Murcia, in Spain) have exposed an imposing fortification system which is unique for its location and date. This discovery, together with all previous finds made in recent years, reaffirm that the site represents the most advanced ‘city’ settlement in western Europe in both political and military terms during the Bronze Age ca. 2,200 BCE. In terms of sophistication, it is comparable only to the Minoan civilisation of Crete.

The archaeological site is located in the Sierra Tercia, on a steep hill at the confluence of the Rambla de Lebor and Salado Cliff around 6 km west of Totana town in Murcia.

Characteristics of this site have not been observed in other constructions of Bronze Age Europe; defensive walls three-metre thick ; square towers measuring up to seven metres; monumental entrance; and even an ogival arched postern gate – an architectural element unique in Europe during that period.

Located on top of a hill, a vast wall surrounded an area of 4 hectares inside which the city was constructed. Unusually, the architectural forms are reminiscent of Eastern Mediterranean military engineering, its model is typical of sites such as the second city of Troy.

The alignment and layout of the defensive circuit reveals a carefully considered strategy, and may also represent in stone a new conflict and class-based power structure which conditioned the development of other communities in the Iberian Peninsula during the following seven centuries.

The discovery poses new questions about what is currently known about the origin of economic and political inequalities in Europe, the formation of the warrior elites and the role violence played in the formation of cultural identities.

The fortification consisted of a wall measuring 2-3 metres thick, constructed of large stones and bonded with lime mortar, with thick pyramidal-based towers located at regular intervals along the length. The original height of the defensive wall was up to 7 metres.

Six towers have been discovered along a length of 70 metres that has so far been investigated, although the full perimeter of the fortification has still to be established. The entrance to the walled enclosure was a passageway constructed with strong walls and large doors at the end, that would originally been barred with thick wooden beams.

One of the most unusual architectural elements discovered is the ogival arched postern gate (smaller secondary doorway), located near the main entrance. The arch is in good conditions and is the first one to be found in Prehistoric Europe, though similar precedents can be found in the second city of Troy (Turkey) and in other urban centres of the Middle East (Palestine, Israel and Jordan), influenced by the civilisations of Mesopotamia and Egypt.

This suggests strongly that people from the East participated in the construction of the fortification and it is possible they could have reached La Bastida after a crisis known as the 4.2 kiloyear event which devastated the East 4,200 years ago.

It would then be centuries later that civilisations like the Hittites and Mycenaeans, or city-states such as Ugarit, incorporated these innovative methods of architecture into their military architecture.

The 4.2 kiloyear aridification event was one of the most severe climatic events of the Holocene period in terms of impact on cultural upheaval and is held partly responsible for the collapse of the Egyptian Old Kingdom, the Akkadian Empire and in the Arabian Peninsula, the ending of the Umm al-Nar period. The drought may even have caused the collapse of Neolithic Cultures around Central China.

From 2008 to 2011, excavations unearthed large residences measuring over 70 square metres throughout the city’s four hectares. These large houses and public buildings were alternated with other smaller constructions, all separated by entries, passageways and squares. A large pool with a capacity for almost 400,000 litres of water shows that the city’s population was highly structured and organised by a central authority.

The Argaric culture that formed this site was a milestone of sedentary life, urbanism, metallurgy and political and economic inequalities. La Bastida offers a unique and exceptional opportunity to understand this key stage of Europe’s past.

The discoveries made at La Bastida reveal a military, political and social structure that establishes a ruling elite that seems founded on war (or at least the fear of conflict) by a powerful warrior class.

This society lasted seven centuries and conditioned the development of other communities living in the Iberian Peninsula. Overall, archaeologists are redefining what is known of the origin of economic and political inequalities in Europe, as well as military institution and the role played by violence in the formation of these identities.

A unique archaeological park in Spain

The excavations at La Bastida are directed by the Research Group in Mediterranean Social Archaeoecology (ASOME) of Universitat Autònoma de Barcelona (UAB).

The intention over the coming years for La Bastida will be the systematic excavation of the site with the aim of creating a unique archaeological park open to the public consisting of a museum, a research and documentation centre and a conserved site open to visitors.