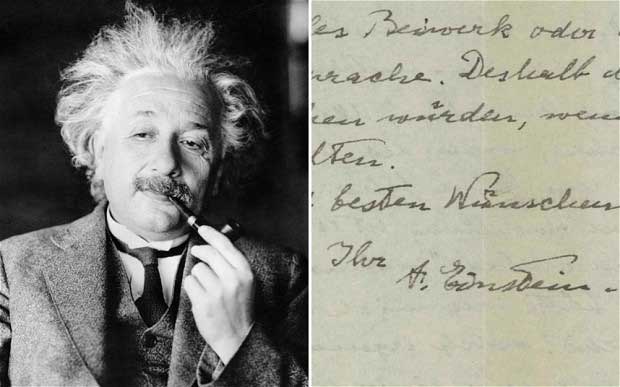 Einstein’s ‘God Letter’ to Be Auctioned on EBay

A letter handwritten by physicist Albert Einstein a year before his death, expressing his views on religion, will be sold on eBay this month with an opening bid of $3 million (£1.9m), an auction agency said.

Known as the “God Letter,” the correspondence offers insights into the private thoughts about religion, God and tribalism of one of the world’s most brilliant minds.

“This letter, in my opinion, is really of historical and cultural significance as these are the personal and private thoughts of arguably the smartest man of the 20th century,” said Eric Gazin, the president of Auction Cause, a Los Angeles-based premier auction agency, which will handle the sale on eBay.

“The letter was written near the end of his life, after a lifetime of learning and thought,” he added.

Einstein wrote the letter in German on January 3, 1954, on Princeton University letterhead to philosopher Erik Gutkind after he read Gutkind’s book Choose Life: The Biblical Call to Revolt.

“The word God is for me nothing more than the expression and product of human weaknesses, the Bible a collection of honourable, but still primitive legends which are nevertheless pretty childish. No interpretation, no matter how subtle, can (for me) change this,” wrote the German-born scientist, who in 1921 was awarded the Nobel Prize in Physics.

The anonymous seller of the letter, which will be auctioned with the original envelope, stamp and postmark, purchased it from Bloomsbury Auctions in London in 2008 for $404,000.

Since that time the letter has been stored in a temperature-controlled vault at a public institution.

Although the opening bid of the eBay auction is $3 million, Gazin, who handled previous high-profile online auctions, said he expects it will fetch double or triple that amount during the Oct 8-18 auction at www.einsteinletter.com

“eBay has the widest possible audience and it is so global and so accessible,” he explained, adding that 10 years ago the last major Einstein letter sold for more than $2 million.

“We feel this is a reasonable starting price given the historic importance and the interest in Einstein,” Gazin added.