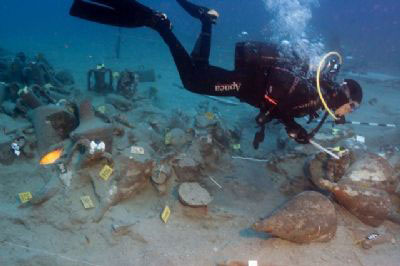 The Mazotos shipwreck, off the south coast of Cyprus, is among the very few in the Mediterranean that can provide information on shipbuilding during the Classical period, according to a press release issued by the Department of Antiquities which referred to the third full excavation season of the shipwreck that was completed successfully during the summer of 2012.

The fieldwork was conducted by the Archaeological Research Unit of the University of Cyprus, under the direction of Dr Stella Demesticha, in collaboration with the Department of Antiquities of Cyprus and the THETIS Foundation.

During this last field season, the team opened two new excavation trenches at the northern part of the assemblage, which is most likely the stern area of the ancient ship. One of the main objectives of this field season was to investigate the size of the ancient ships hull that is still preserved under the ceramic cargo.

According to the press release, this years results, in combination with the findings of previous field seasons, indicate that the keel and a considerable part of the ships planking is preserved to a length of at least 15 meters.

This is of prime importance, as it places this wreck among the very few in the Mediterranean that can provide information on shipbuilding during the Classical period, the press release added.

Moreover, during the 2012 field season, we were able to shed some new light on trade in antiquity, another important domain of maritime archaeology.

Together with the Chian wine amphorae, the ships main cargo, a secondary type was also transported on the Mazotos ship: Wine jugs, which were stowed among the amphorae found in the aft part of the hold, the Antiquities Department added.

Furthermore, it noted, small fine ware pottery was recovered from the stern cabin, which was also partly excavated. These vessels must have belonged to the crew or the passengers of the ship; one of them bears two inscribed letters, most probably the initials of someones name.

The photogrammetric mapping of the site was conducted in collaboration with the Department of Civil Engineering and Geomatics of the Cyprus University of Technology, Limassol, under the direction of Dimitris Skarlatos.

All materials recovered were transported to the dedicated lab for underwater finds in the Archaeological Museum of Larnaca, where they will remain for desalination and conservation, both undertaken by the Department of Antiquities of Cyprus.

Fifteen graduate and postgraduate students from the University of Cyprus took part in the project, together with 45 maritime archaeologists and divers from Cyprus and 11 other countries: Greece, Germany, Austria, France, Belgium, Spain, Poland, Croatia, Finland, Australia and USA.