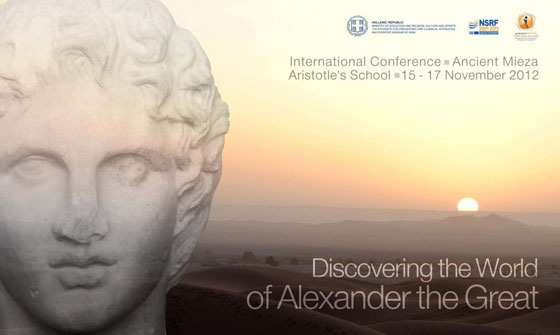 Discovering the World of Alexander the Great

The 17th Ephorate of Prehistoric and Classical Antiquities/Polycentric Museum of Aigai organize an International Conference entitled “Discovering the World of Alexander the Great” (15-17 November 2012) and a one-day conference (18/19 November 2012) about the palace of Aigai, presenting the monument (guided tour at the site), and the newest conclusions drawn during the project of conservation, restoration and embellishment of the monument conducted in the framework of the NSRF.

The conferences will take place at the Cultural Center of the Municipality of Naoussa, located at the archaeological site of the Aristotle’s School (Ancient Mieza). The goal of the international conference is to introduce to the international scientific community and to a broader audience the Virtual Museum Alexander the Great: From Aigai to the Ecumene, a big and innovative project inspired, planned and realized by the 17th Ephorate, and funded by the NSRF.

In this conference, an overall picture of the research about Alexander the Great and the consequences of his route will be presented for the first time. Another important aspect of the conference is the presentation of the archaeological surveys conducted in the countries which constituted the Hellenistic world: scientists of international repute and directors of excavations from Turkey, Jordan, Israel, Egypt, Uzbekistan, Tajikistan and Afghanistan, and also from England, France, Germany, Italy, Switzerland, Russia and Greece will sum up their surveys and announce the new historical and archaeological data about the cities of Asia Minor, the southern Levant, Egypt of Mesopotamia, Persia, Baktria etc. Furthermore, researchers, historians and museum directors will talk about Alexander the Great’s personality and how he influenced history, myth and art.

The network of cities founded by Alexander the Great and his successors, in which older cities were also organically incorporated by combining local and Hellenistic features, became the geographical and cultural space of the Hellenistic era and the first form of universality. At that time, for the first time, a new way of communication and spreading of cultural goods appeared, a new experience of community and relations between people, a way of perceiving space and time as “our world”, and living within it as having a common language, an “ecumene”.

At the one-day conference, all new archaeological data which came to light during the surveys in the palace of Aigai will be presented. The emblematic building founded by Philip II of Macedon in the second half of the 4th century BC became the architectural, technical, artistic, political and philosophical model of the public building which dominated the Hellenistic, Roman and Medieval world. The ecumenical aspect of the Aigai Palace will be examinated at a roundtable discussion.

Programme of the Conference