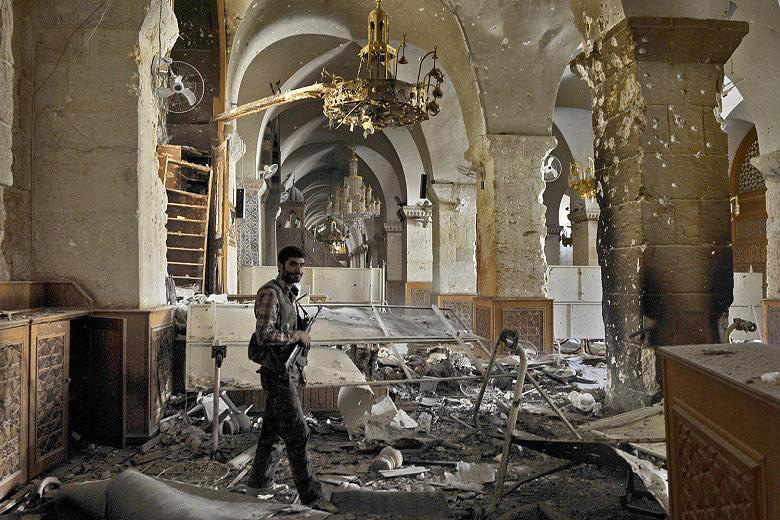 Few forms of conflict are so damaging to a country or its people as a prolonged civil war. By 1939, when Franco’s forces had finished mopping up the last Republican resistance in Spain, more than half a million lay dead and some of the most beautiful city centres in Europe had been destroyed.

A similar pattern played out in 1970s Lebanon, which saw 150,000 casualties and the almost complete destruction of the elegant villas of Ottoman Beirut. In Afghanistan it was not Soviet invasion or occupation that killed most people or wrecked Kabul, but the internecine street fighting that followed in the early 1990s. In a few years, as Masood’s rockets fell on Pashtun neighbourhoods of Kabul, and Hekmatyar’s forces emptied the Tajik suburbs, palaces and museums were looted; while in the Shomali plain, Gandharan Buddhist sites were serially plundered of their treasure.

Once a monument is destroyed, it can never be replaced

Today, as Syria faces the desperate prospect of an open-ended civil conflict, traumatised by its 20,000 dead and 250,000 refugees – the human cost of the war – it may seem trivial to mourn the speed with which its astonishing archaeological and architectural heritage is disappearing. But while the human pain inflicted by torture and killing is immeasurable, the destruction of a people’s heritage is irretrievable: once a monument is destroyed, it can never be replaced. With modern weaponry it only takes a few months of concerted shelling for the history of an entire people to be reduced to rubble.

Groups like the World Monuments Fund are monitoring the losses. There has been serial looting of Syrian museums and archaeological sites, especially from the museums at Idlib, Dura Europos and Palmyra. Terrible damage has also been done to some of Syria’s most spectacular monuments, such as the souks, citadel and Umayyad mosque of Aleppo, the ancient cities of Palmyra and Apamea, and several of the country’s crusader castles, including the greatest of them all, Krak des Chevaliers. The old city of Homs has been levelled, and with it two major museums, several early Christian churches and a number of Ottoman mosques.

As in Afghanistan, there is evidence the looting is highly organised. A Lebanese antiquities dealer recently told Time magazine that he was making a fortune from would-be Syrian freedom fighters who were selling him priceless Syrian antiquities for very low prices and buying arms at inflated rates. But an even more irretrievable loss than the antiquities (which potentially can be bought back) or monuments (which can sometimes be restored) is likely to be the ripping apart of Syria’s closely woven sectarian patchwork. Until two years ago, Syria was the last country in the Middle East to retain its richly mixed Ottoman inheritance. Now, as happened before in Greece, Turkey, Egypt and the Balkans, civil war is leading to a consolidation of the majority community and the exile or expulsion of the minorities.

Ethnic and religious minorities will disappear

One of the distinguishing features of pre-civil war Syria was the way it sheltered so many ethnic and religious groups that had disappeared elsewhere. As well as the dominant Alawites there were large minorities of Kurds, Armenians, Circassians and Druzes, as well as more arcane groups such as the Yezidi (wrongly believed by many Sunnis to be devil-worshippers), Mandeans (a Gnostic sect said to be descended from followers of John the Baptist) and the Urfalees (Syrian Orthodox refugees from the early Christian centre of Edessa). There were also a huge number of heterodox Sufi brotherhoods, which preserved important musical and mystical traditions. Judging by precedents in other former Ottoman countries, it is these minorities that are most likely to disappear in the next few months. Already there are tragic reports emerging from the wreckage of Aleppo of the wholesale emigration of the ancient Armenian community to Yerevan.

Things are very bad among the Sufis too. Aleppo’s most celebrated Sufi singer was Sheikh Habboush, who used to hold his spectacular zikr every Wednesday evening. He was also a prominent member of the leading classical Arabic music group, al-Kindi ensemble: “No one has heard from Sheikh Habboush for the past three months,” al-Kindi’s director, Julien Jâlal Eddine Weiss, told me over the phone from Istanbul, where he has taken shelter. “He has disappeared and may well be dead. His [teke] received a direct hit from a bomb and the top floor was destroyed. No one knows if it was a stray shell or a hit by the Salafis: they hate the Sufis and want to close down the brotherhoods just as they did in Timbuktu. Their black flags are now seen all over Aleppo. Most of our musicians are homeless, and our principal whirling dervish now has shrapnel riddling his legs.”

Also in danger are the musicians of the Christian Urfalee community. Musicologists believe that the Urfalee chants are the most ancient still in use anywhere in the Christian world. They were composed in the 3rd century by St Ephrem, based on earlier Jewish melodies, and became so popular that they were imported by the early church in the west. If the musicologists are right, the Urfalees preserve the root traditions of both western plainchant and eastern Orthodox sacred music. Now the Urfalees quarter is on the frontline between the government and the rebels.

When the uprising in Syria began at the height of optimism about the Arab spring, there were hopes it would usher in a new dawn of freedom and democracy. Today the future looks immeasurably grimmer, and what kind of Syria will be left standing after the firing ceases is a prospect few now even wish to consider. Some of the damaged architectural sites can still be saved. But more irreversible damage is being inflicted every day on Syria’s living traditions, many of which now look likely to disappear from its soil forever.