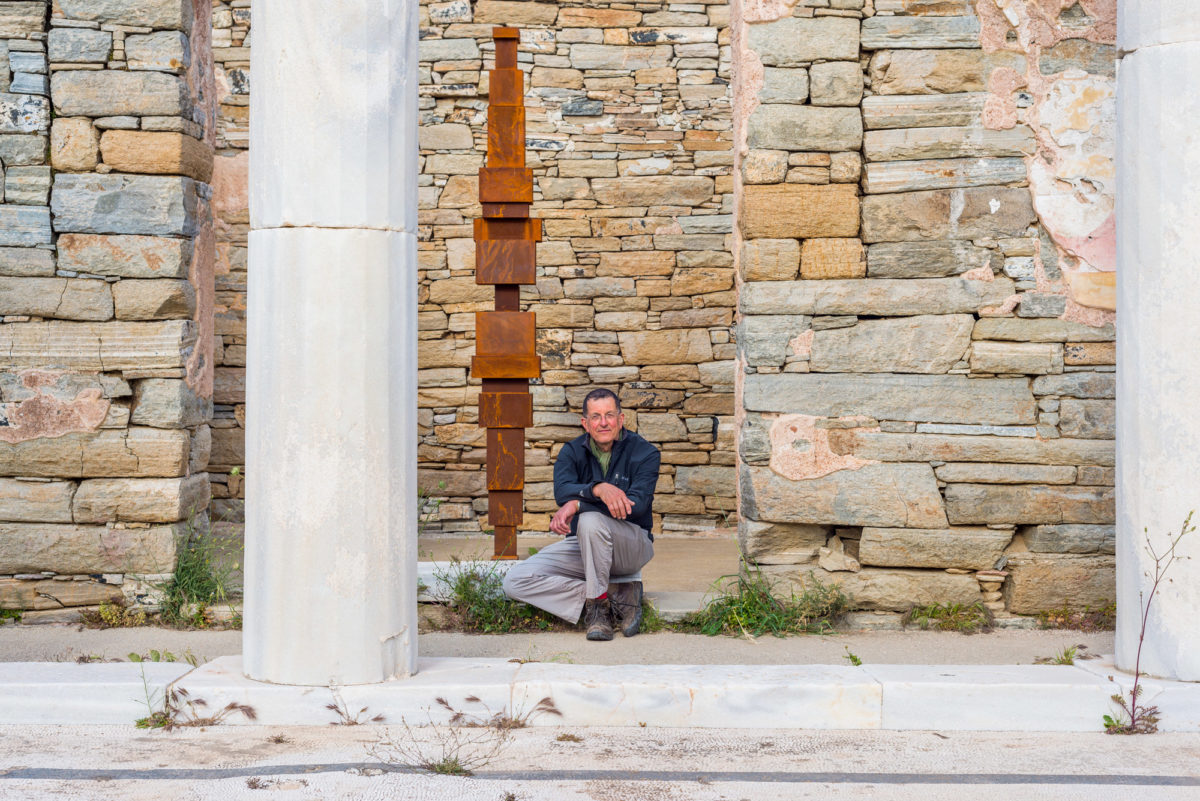 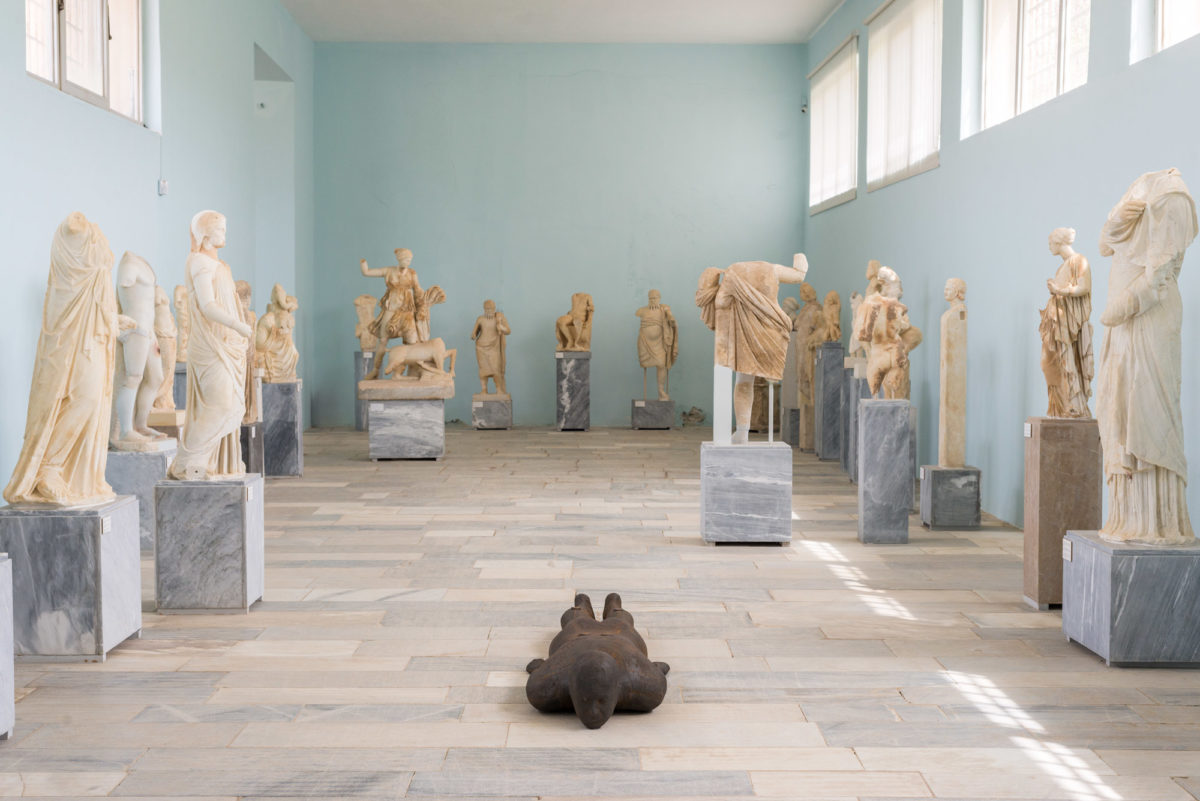 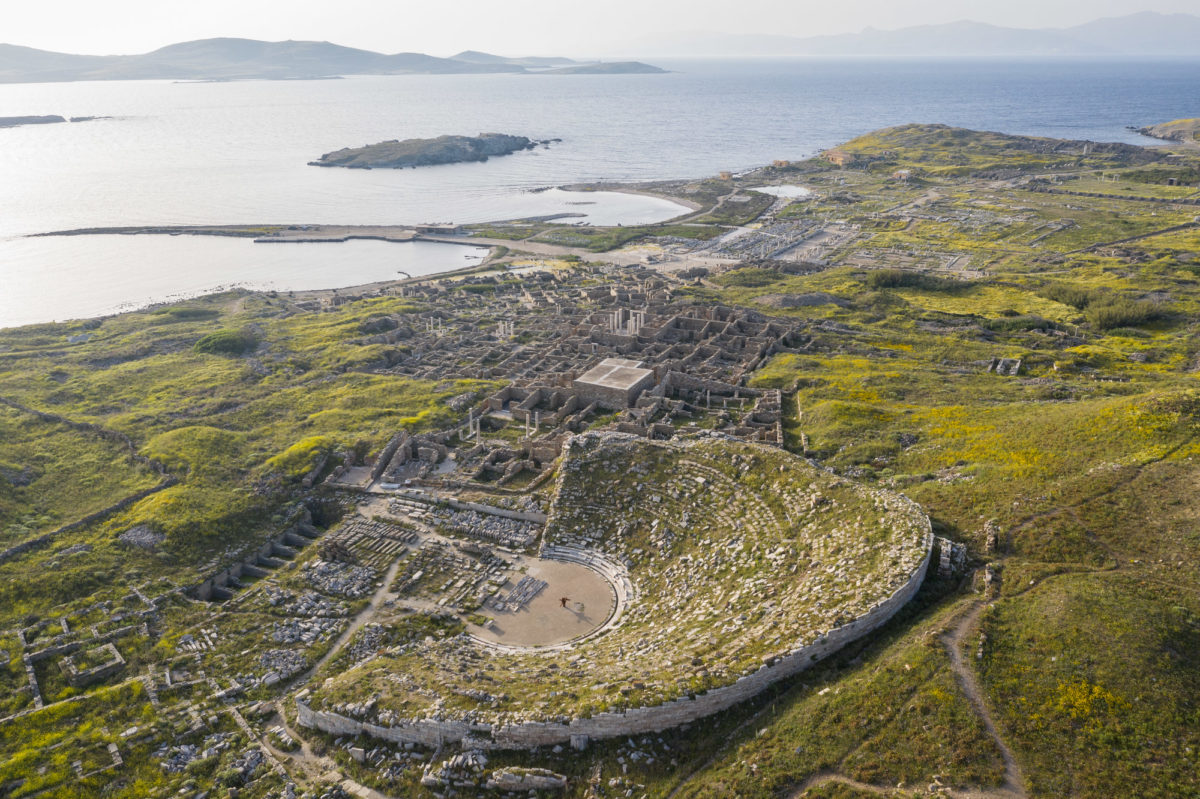 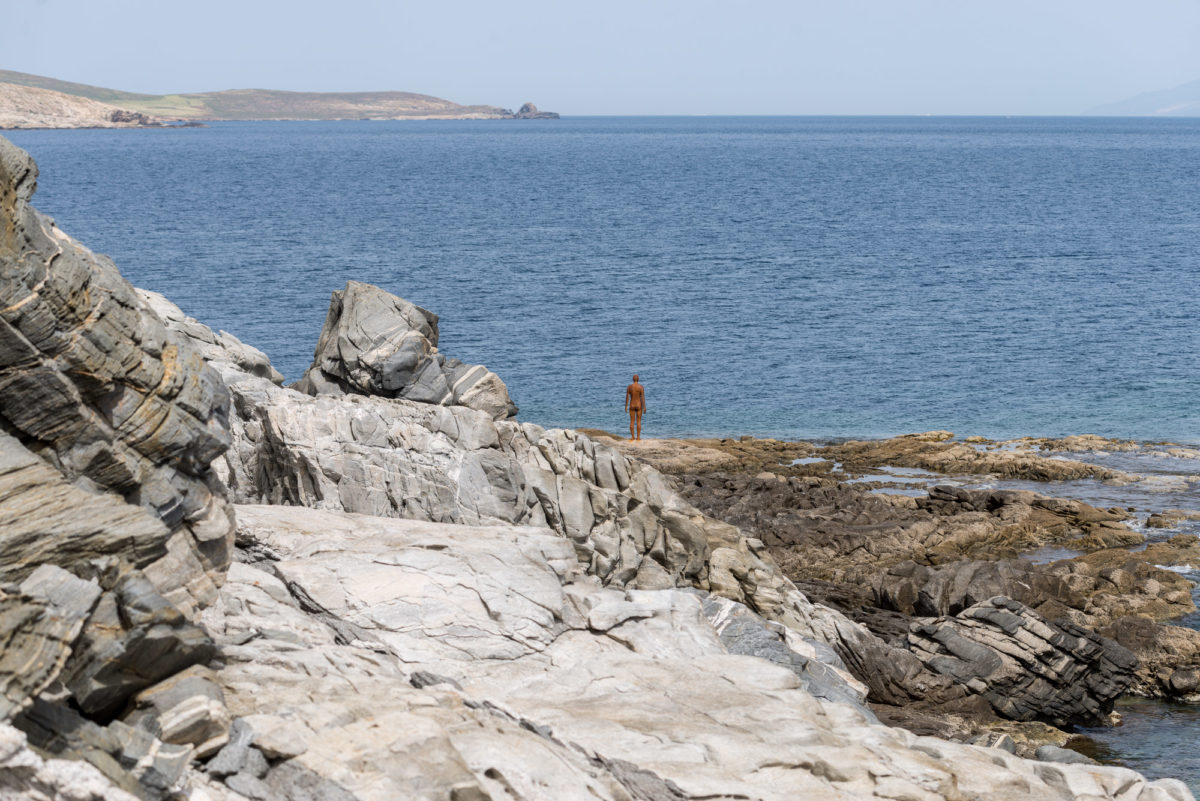 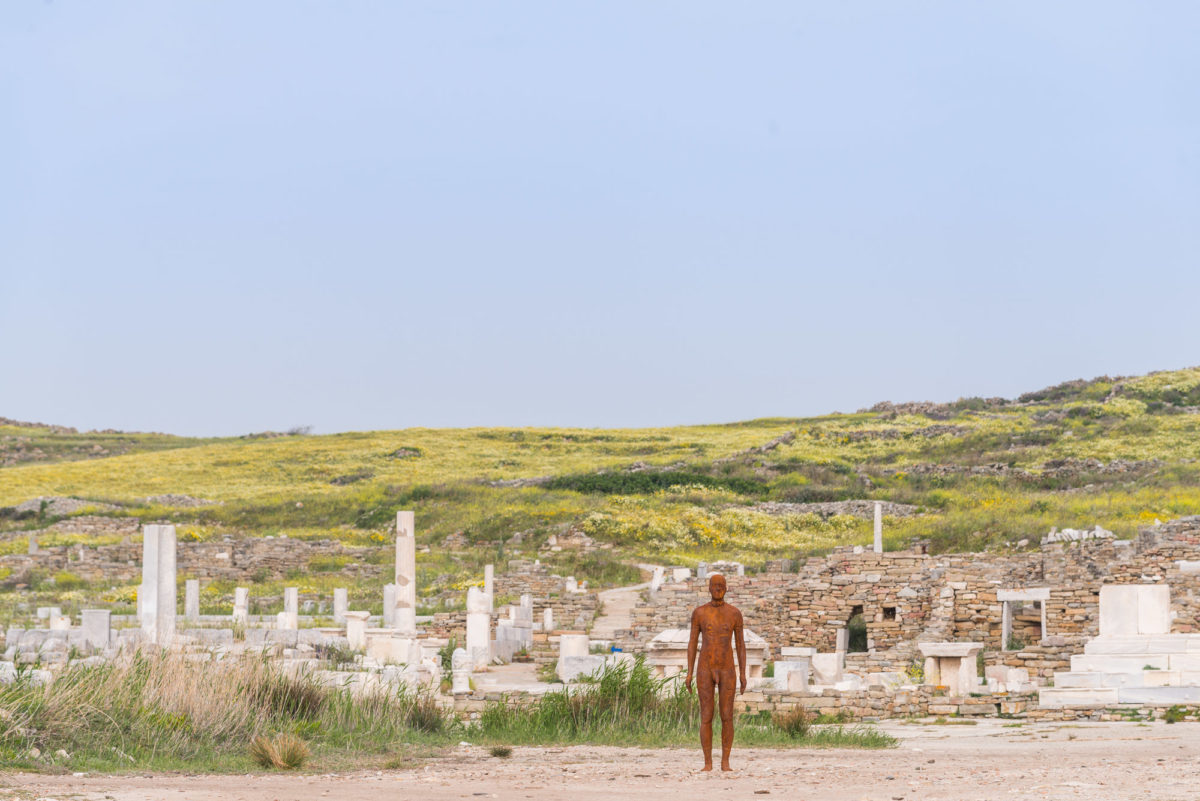 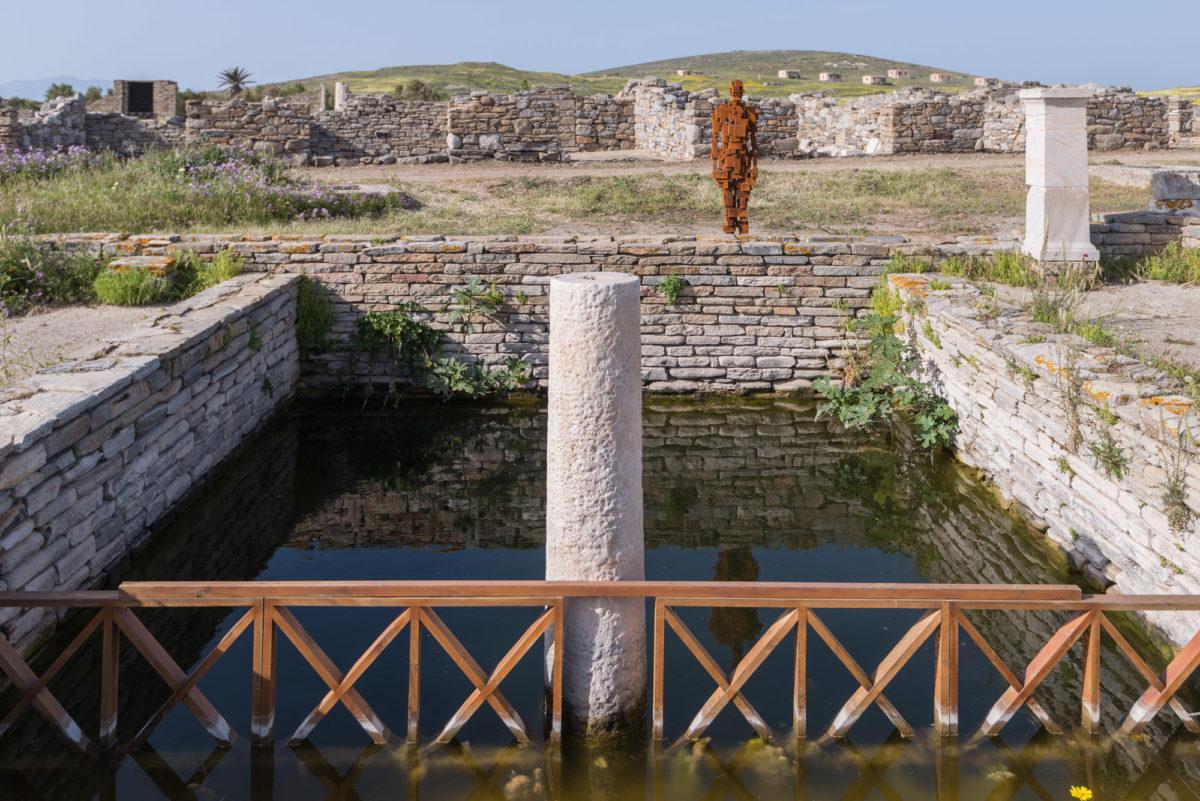 SIGHT – On the sacred island of Delos

The exhibition of Antony Gormley  titled SIGHT On the sacred island of Delos, Greece, has opened. It was organized by NEON in collaboration with the Ephorate of Antiquities of Cyclades. The exhibition will run through 31 October 2019. It was curated by Iwona Blazwick OBE, Director, Whitechapel Gallery and Elina Kountouri, Director, NEON.

SIGHT is an unprecedented site-specific exhibition by British artist Antony Gormley, in collaboration with the Ephorate of Antiquities of Cyclades, on the archaeological site and the Museum of Delos Island.

This project by the renowned sculptor marks the first time that an artist takes over the archaeological site of Delos since the island was inhabited over 5,000 years ago and is the first time a contemporary art installation has been unanimously approved by the Greek Archaeological Council to take place in Delos. SIGHT is specially conceived to resonate with the statuary, temples, squares, vistas and the topography of the island of Delos.

Gormley (b. 1950) is one of the most renowned artists of our time. During the past 40 years, his sculptures and installations have challenged our perception of space and the human body.

As an undergraduate at Trinity College, University of Cambridge, Gormley studied archaeology, anthropology and art history, equipping him with a deep understanding of the diversity of human cultures and their origins. These interests led him to leave England in 1971 and embark on a transformational journey: hitchhiking through Europe, on to Turkey, Syria, Lebanon, Iran, Afghanistan and Pakistan, arriving in India a year later where he lived for two years, studying Buddhist meditation. He returned to London in April 1974, knowing that he would dedicate his life to art. This early expedition has had a defining influence on his sculpture, which focuses on the body, its position in space and its connection to the elements and time.

‘I treat the body as a place encouraging empathic occupation of that which lies the other side of appearance: what it feels like.’

In this installation on Delos, Gormley repopulates the island with iron ’bodyforms’, restoring a human presence and creating a journey of potential encounters. He has installed 29 sculptures made during the last twenty years, including 5 specially commissioned new works, both at the periphery and integrated amongst Delos’s archaeological sites.

The works animate the geological and archaeological features of the island: a granite rock in the middle of the Cycladic Islands in the Aegean less than 5 kilometres long and 1.5 kilometres wide, which has a past filled with myths, rituals, religions, politics, multiculturalism and trade. Its intertwined and contrasting identities, as both holy place and commercial town, combined with its topography and geographical location, made the island singular and cosmopolitan Hellenistic town.

Mythology tells us its first name was «Άδηλος» (A-Delos), meaning ‘the non-visible’ – a floating rock with no fixed location. It became «Δήλος» Delos, ‘the visible’, when Zeus arranged for Leto, his mortal lover, to find refuge there, safe from the wrath of his wife, the goddess Hera. When Leto gave birth to twins Apollo, god of light, and Artemis, goddess of the hunt, the island’s destiny and future prosperity was assured. This unique history is imprinted on Delos’s architecture, sanctuaries and houses, and in the past was animated through rituals that celebrated the gods and protected the island. Later, sanctuaries to foreign deities, including Serapis and Isis, were built here.

Historical narratives record that humans occupied Delos at the highest point of the island, Mount Kynthos, during 2500–2000 BC and remained through ancient and classical times up to 69 BC, when the majority of the inhabitants abandoned Delos as it was no longer a vital commercial port on the Mediterranean routes. Today, with the exception of archaeologists safeguarding the island and those undertaking scientific research, Delos is uninhabited. Its ruins, like those at Pompeii, stand devoid of human presence.

Gormley completely reinterprets the function and purpose of sculpture, transforming the traditional statues and totems of the ancient world that once adorned public squares, temples and private dwellings into sites of empathy and imaginative projection. The first connection between visitors and the work is established before they even set foot on Delos. Approaching the rugged northwest coast, they catch sight of a lone figure (from Gormley’s series Another Time, 1999–2013), standing sentinel on a rocky promontory at the water’s edge. Two more works from the same series – also looking towards the distant horizon – stand on Plakes Peak and on Mount Kynthos, and another similar work stands in the waters of the harbour. Further sculptures are integrated with archaeological sites across the island, from the Stadium to the Τheatre district and from the merchant stores to the Μuseum site.

Gormley has studied the temples and the sacred enclosures, the horizon and the topography created by the wind and the salt. His sculptures, taking naturalistic, cubic and more abstracted forms, either stand or lie on the ground, exposed to the elements. Interacting with the island’s topography, the works appear and disappear. They activate the elemental character of the island and its human history, establishing a connection with our collective memory. Gormley respectfully engages the audience in an experience that does not compete with the space or its history, but rather, establishes a physical and intellectual connection with our collective memory.

Visitors to Delos are invited to connect with time, space and nature, which inevitably link to our shared future.

Comments from the collaborators:

‘The extensive ruins within the unspoilt natural beauty of uninhabited Delos offer the visitor the unique experience of a journey through time. The installation SIGHT, acts as an amplifier of the personal experience of the site and as a channel facilitating diverse readings of the past. Antony Gormley’s sculptures give the visitor the pleasure of wandering amid this Delian anasynthesis which is ideally suited to reflecting on our identity and exploring our cognitive and aesthetic ties with the past.

Demetrios Athanasoulis, Director of the Ephorate of Antiquities of Cyclades

‘I have experienced once again the magic of this place; an ancient magic evoking an energy, which is especially intense now in its coexistence with modern sculpture. The exhibition SIGHT is a joint effort – made by the archaeologists, by the NEON team, and by the Central Archaeological Council which gave the exhibition its approval – is something that we must now continue in this land, which can no longer be just a destination for people to see our ancient glory, but a destination where our present restlessness is on display, along with our vitality and eagerness to remain topical in this world.’

‘Antony Gormley unfurls a remarkable work of choreography. 29 unique figures, created over two decades, are placed to intensify the experience of this lost civilization, creating a powerful resonance between the body, ancient culture and the elements.’

‘Gormley proposes a radical openness: “Art is about reasserting our first-hand experience in present time.” For many centuries Delos was a site of trade and multiculturalism, a topos of exchange of ideas and goods; a centre where different faiths were practiced. Today, like other archaeological spaces – it serves as a reminder of the interconnectedness of different cultures and nations; how humans can peacefully cohabit in an atmosphere of tolerance and inclusivity.

This exhibition is an exceptional opportunity for a wide audience to engage with Gormley’s work and be reminded how central art is to the human story. I hope visitors will leave Delos feeling that his contemporary sculpture and this site belong to us all.’

Opening hours may vary depending on the month.

The island of Delos is accessible by boat mainly from Mykonos as well as Paros and Naxos Islands.

There is no extra charge for entrance to the exhibition.