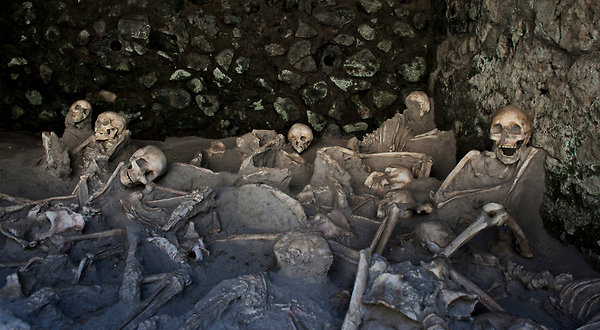 A success story in archaeological conservation

“They died of thermal shock as they were waiting to be saved via the sea,” explains  archaeologist Domenico Camardo who has recently conducted a survey of skeletal remains of Herculaneum’s citizens, who died in 79 AD, when Mount Vesuvius erupted, in what were once beachfront warehouses.

Based on the fact that these people were found carrying with them personal items, like jewelery, coins and keys, the archaeologist concludes that they were hoping to return home.

Camardo is the lead archaeologist of the Herculaneum Conservation Project, a collaboration between the Packard Humanities Institute and the Soprintendenza, supported by the British School at Rome, which since 2011 has sought to address some of the most pressing threats to the survival of the site.

In the framework of the Herculaneum Conservation Project, walkways and gates were recently added to the warehouses, so that they soon will be open to public on special occasions. This revival of history for the modern audience “is one of the beautiful things we get to do” said Camardo.

In fact, the Herculaneum Conservation Project, a public-private venture, proves to be more efficient compared to the management of Pompeii, and has succeeded to complete many tasks and initiatives at the site.

As stated at the Project’s site, in 2006 David W. Packard, President of the Packard Humanities Institute, “shared a vision for Herculaneum’s archaeological site, which went beyond the conservation work already taking place, with what he called his ‘Big Picture’. He expressed his commitment to the ongoing conservation of the site, but hoped that the example of this project – led by Italians – would provide an impetus for a re-evaluation of how the Italian State organizes, manages and funds the conservation of its archaeological sites”.

Packard, son of one of the founders of Hewlett-Packard, has also discretely funded the project with 20 million $ over the past 12 years, and is being personally involved, visiting the site regularly and being informed about the development of the various projects at Herculaneum.

“The Packard people have really engaged the local community and authorities into feeling that this is their project,” said Daniel Berger, a Culture Ministry consultant who has acted as a liaison in the Packard project. “It’s made the monument become a source of pride, and income.”

Before the Packard team arrived in 2001 at Herculaneum, two thirds of the ancient city were closed to the public, and as described at a European conference held in Rome in 2002, it was the worst case in the world of an archaeological site in extreme decay.

More integrated management practices and the opening up of the inflexible, top-down approach that is typical of Italian bureaucracy has helped to put Herculaneum on a more successful path. In addition to that, new models of financial support have been tried, and collaborations have been undertaken with other nongovernment partners, both Italian and international, in support of the public heritage authority.

Unesco is studying how Herculaneum could be a model for other World Heritage Sites, particularly in Mediterranean and Arab countries.

As Judy Lawrence a British visitor of the site put it: “Pompeii is spectacular; Herculaneum more real. This place makes you cry.”