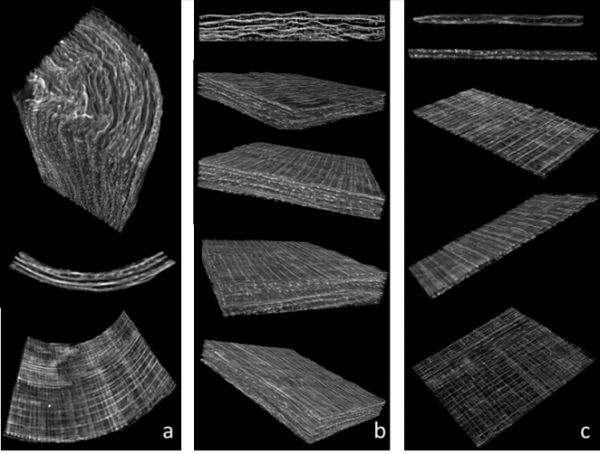 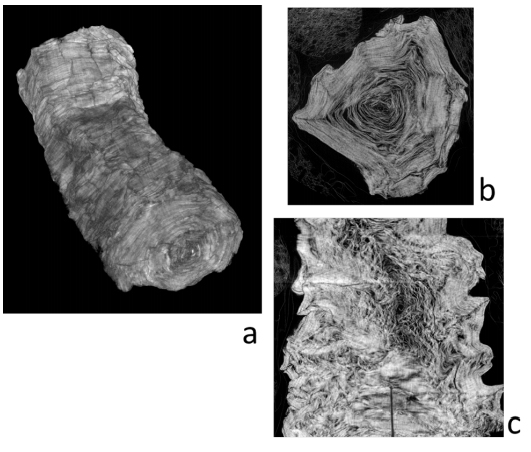 In AD 79, Mount Vesuvius erupted violently, spewing pyroclastic flows across the Roman cities of Pompeii and Herculaneum. The eruption has become one of the most famous in history because the speed of the hot gases caught the locals unawares. The intense heat captured many features of city life, including individuals as macabre still-lifes. Much of this detail was then preserved beneath huge volumes of ash that rained down on the region.

One of the discoveries made in 1752 in Herculaneum was of an intact library. This contained large numbers of papyrus scrolls of philosophical texts, many associated with the Epicurean philosopher Philodemus of Gadara.

This is the only complete library that has survived from antiquity. And while many of the rolls were destroyed by workmen at the time and by scientists and archaeologists later, some 1,800 rolls survive, most of them in the Naples National Archaeological Museum in Italy.

Reading these texts is a significant challenge. During the eruption, the papyrus rolls were heated in an oxygen-free room, carbonized, crushed, and in some cases partially melted. Today, many of them are not only fragile but tightly rolled, twisted, and deformed.

A wide range of archaeologists and other scientists have attempted to unroll them with varying degrees of success. These researchers have unrolled about 800 papyri. Many crumbled, and one or two even exploded during this work. And in many cases where the papyrus survived, any visible writing quickly deteriorated when exposed to oxygen for the first time in almost 2,000 years.

So in recent years, archaeologists have taken a more cautious approach in the hope that modern imaging techniques will be able to virtually unroll the scrolls and thereby study the texts they hide. But the attempts so far have had limited success.

Today, Inna Bukreeva at the Institute of Nanotechnology in Rome, Italy, and a few pals say they have made significant improvements to the software. As a result, they’ve peered inside these unopened rolls with unprecedented detail. “We restored for the first time several extensive textual portions of Greek, the largest ever detected so far in unopened Herculaneum papyrus rolls,” they say.

The technique is straightforward in principle. The team began by imaging the papyrus roll at the European Synchrotron Radiation Facility in Grenoble using a technique called x-ray phase-contrast tomography. This produces a 3-D representation of the roll in which the sheets can be identified and separated, at least in theory.

The difficulty is that the software that performs this kind of virtual unrolling has to begin by assuming that the papyrus sheet has a specific shape, such as forming part of a cylinder. The virtual unrolling software begins by assuming that the papyrus has formed into part of a cylinder. It then virtually peels this part of the cylinder from the 3-D mass of paper and then examines it for signs of writing.

This hasn’t worked as well as researchers would have liked. For a start, the scrolls are so badly twisted and deformed that they do not follow the shape of a cylinder. Worse, carbon-based ink does not show up on carbonized papyrus, at least not in x-ray images.

So Bukreeva and co have manually explored the papyrus structure looking for regions in which this assumption is approximately true. Having found several promising regions, they begin the process of virtual unpeeling.

One benefit of this approach is that because the sheets lie on top of each other, consecutive sheets have the same geometry. So a technique that works for one layer should also work for those above and below it.

Having isolated several sections, the software then flattens these sheets, allowing the team to look for signs of writing. Here the structure of papyrus comes to their aid. The material itself is built up from crisscrossed papyrus fibers that form a perpendicular grid. If the team assumes this grid must have originally been regular, then any distortions visible now must be the result of the bending and twisting and crushing the papyrus roll.

So the software can virtually flatten the sheet by “undistorting” it in a way that re-creates the original regular grid of papyrus tissue.

Finally, the team looks for signs of writing, which should also be undistorted by this process. The team hopes that the central regions of the papyrus are better preserved than the carbonized exterior. But they can also look for the tiny indentations that the writing process leaves and which x-ray phase contrast tomography can reveal.

To test their technique, the team created its own test sample by rolling a modern papyrus sheet, then heating and crushing it. Sure enough, they were able to peel it apart and reveal the original text they had written using an x-ray and the virtual peeling software. That gave them hope the technique would work on the ancient papyri.

To find out, they created 3D x-ray images of two papyri called PHerc 375 and PHerc 495 and then let the software loose on the data.

The results make for interesting reading. The technique has revealed several regions of interest. “Several textual portions of up to fourteen lines were identified for the first time, the largest ever detected so far in unopened papyrus rolls,” say Bukreeva and co.

That’s fascinating work that opens the way to more virtual unrollings. As Bukreeva and co put it: “The optimisation and the automatisation of the virtual unfolding procedure open up new perspectives in this direction, which are likely to produce a future breakthrough in our knowledge and understanding of ancient philosophy and classical literature.”