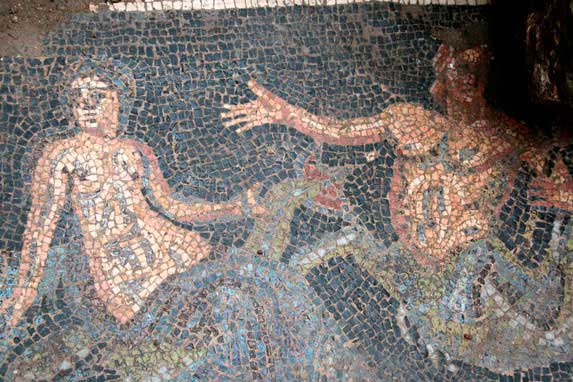 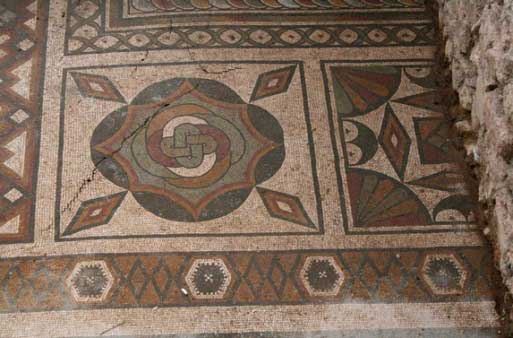 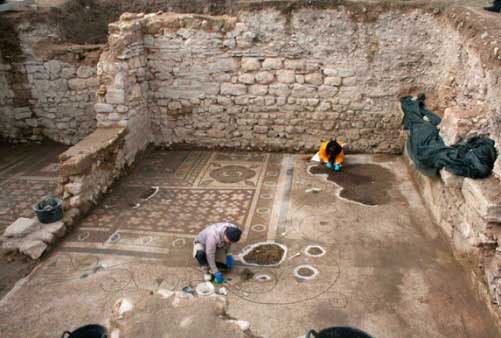 Impressive finds came to light during this year's surveys

The finds that came to light during this year’s excavations at the hill of Aghia Petra, in Didymoteicho, which has been identified with the ancient Plotinopolis, a Roman city founded by the Roman Emperor Traianus, who named the town after his wife Plotini, are once again impressive.

The archaeological interest of the hill has been recognized as early as before World War II, while in 1965 a golden forged bust of Roman Emperor Septimius Severus was found there. In Aghia Petra, systematic excavations were conducted by the 19th Ephorate of Prehistoric and Classical Antiquities in 1977 and the early 1980s.

As revealed during this year’s excavations, the mosaic floor that has been unearthed and is part of a big room, a typical Roman triclinium, is dominated by geometric motifs and symbols.

According to archaeologist Matthaios Koutsoumanis, head of the excavation works since 1996, in Section Z, at the north of the excavation area, a mosaic floor and parts of a fresco have come to light; the fresco dates to late 2nd-early 3rd century AD. In the northern side of the central scene, where it should be noted that an impressive depiction of the God of Eurus river and Plotini is to be seen, two subsidiary floors with geometric patterns and peltae were revealed, whereas at the southern side birds and plants were depicted.

“The continuity of the central scene to the west, in particular part of the zone with the sea monsters figures, where the ichtyocentaurs and the Nereids are portrayed, also was revealed”, as Mr. Koutsoumanis said. “Both [creatures] are seated on a dolphin, and one of them is holding a scarf over the head like a peplos. It is certain by now that the scene with the Eurus river and Plotinopolis is not the only one, as a second panel is coming to light. For the time being, we cannot say what it depicts, as it is covered by the later Early Christian wall. One thing is for sure, however: next year’s excavation has a lot of surprises in store for us,” the archaeologist added.

The survey of coins will give more specific information for the dating of the building complex and the various phases of its use and the interventions made.

All this indicates that Plotinopolis will gradually emerge as one of the biggest excavations in the region of Thrace.