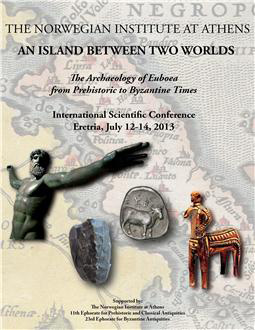 The Archaeology of Euboea from Prehistoric to Byzantine Times

The Norwegian Institute at Athens in collaboration with the 11th Ephorate of Prehistoric and Classical Antiquities and the 23rd Ephorate for Byzantine Antiquities of the Hellenic Ministry of Education, Religious Affairs, Culture, and Sports invites all interested colleagues working on Euboea or whose research is in some way connected to this island to participate in the scientific conference on the archaeology of Euboea, entitled: “An Island between Two Worlds: The Archaeology of Euboea from Prehistoric to Byzantine Times.” The conference will take place over the period of three consecutive days in Eretria in July of 2013.

Euboea has been the focus of generations of Greek and international scholars resulting in more than two thousand different publications since the 1960s. The island’s past has benefitted from the work of regional (i.e. the 11th Prehistoric and Classical and the 23rd Byzantine Ephorates) and of specialized (i.e., The Ephorate for Palaeoanthropology-Speleology of Southern Greece and the Ephorate for Underwater Antiquities) archaeology directorates of the Hellenic Ministry of Culture. The Swiss School of Archaeology in Greece and the British School at Athens have been present on Euboea the longest, working principally in the central part of the island, most notably at Eretria, Lefkandi, and Amarynthos. The work of the Canadian, Dutch, and Norwegian Institutes has focused on the southern part of Euboea. The undisputable wealth of scholarship that testifies to Euboea’s importance and uniqueness makes it imperative that the archaeology of the entire island be put once again into scientific spotlight in its own right. This conference has the objective of providing a forum where past and present work of archaeologists studying Euboea can be showcased and discussed. We also hope to attract colleagues currently working on the island to present their most recent research. In this way, we aim to reaffirm the rightfully important place of the island of Euboea in the scientific efforts to understand the past of this part of the Mediterranean.

All paper abstracts must be submitted electronically in either Microsoft Word (.doc or .docx) or Adobe PDF (.pdf) format and accompanied by a cover letter/email stating the name, institutional affiliation, and the preferred contact information (email) of the applicant. The languages acceptable for abstract submissions and paper presentations are English and Greek. The length of the abstract should not exceed 400 words. The abstract submission deadline is January 15, 2013. The abstracts and all inquiries should be sent to the conference email address at: [email protected]

The format of the conference is paper-and-PowerPoint podium presentations. The conference will take place in Eretria. The organizers are working on securing funding options for accepted conference presenters. The presentations will be divided into sessions at the discretion of the Organizing Committee. We intend to publish the proceedings of the conference. We particularly invite colleagues to submit papers on the following general conference themes or the combination thereof, but we also welcome any papers connected to the archaeology of Euboea:

History of archaeological research on Euboea

Euboea between the mainland and the islands

The first Euboeans: evidence for Palaeolithic and Neolithic habitation in Euboea

In the middle of the wine-dark sea: Euboea and maritime interactions during the Aegean Bronze Age

From core to periphery: Euboea from Geometric to Hellenistic times

Times of trouble or prosperity? Euboea during Roman and early Byzantine times

Between east and west: the archaeology of Byzantine, crusader, and Venetian Euboea

Problems and solutions: future directions of archaeological research on Euboea

The past as the driving force of the future: Euboean cultural heritage and tourism