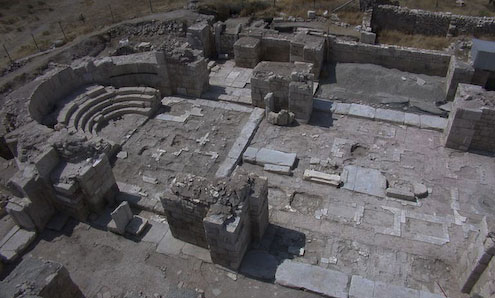 and a mobile museum

The Amorium Excavation Project in Asia Minor, and the construction of a mobile museum for children across Greece are some of the activities of the Stavros Niarchos Foundation.

The city of Amorium, in central Asia Minor, was one of the most important Byzantine cities. It fourished during the 7th-11th centuries AD. In historical sources it is often mentioned as the second most important city after Istanbul. Due to its well-preserved state, the city offers irrefutable evidence of life in Byzantine time.

The fact that Amorium remained uninhabited since the 12 century AD is one of the reasons for its extraordinarily well-preserved monuments and the unhindered continuation of excavations. Apart from significant monuments, archaeological surveys of the city have brought to life rare organic finds, such as fabrics and leather parts of clothes and shoes.

“The finds have been preserved due to the special climate conditions of the area, mostly because of the dry climate,” as archaeologist of the Institute of Mediterranean Studies of the Foundation for Research and Technology, Nikos Tsivikis, explains to the Greek News Agency AMNA.

Excavations at Amorium started in 1987 under the directorship of the late Prof. R. Martin Harrison of the University of Oxford. Currently, the Amorium excavations are being conducted by an international team, with researchers from the Greek Foundation for Research and Technology, the Metropolitan Museum of Art, the Universities of Oxford, Princeton and Anandolu.

The Stavros Niarchos Foundation funds the Amorium urban archaeology project, conducted by the Institute of Mediterranean Studies of the Foundation for Research and Technology.

The project will be completed in three summer sessions, from 2013 to 2015. Surveys will focus on the western area of the city, aiming to reveal the public buildings and the road system of the city. This will be accomplished by excavations, geomagnetic and topographic surveys, as well as digital documentation of the site.

The Hellenic Children’s Museum plans to create a mobile museum that will travel across Greece and approach audiences which for geographical or social reasons cannot visit a museum. This bus-museum will transport collections, exhibits and museum-kits and will give children the opportunity to experience the joy of learning, offering at the same time an alternative way of experiential learning.