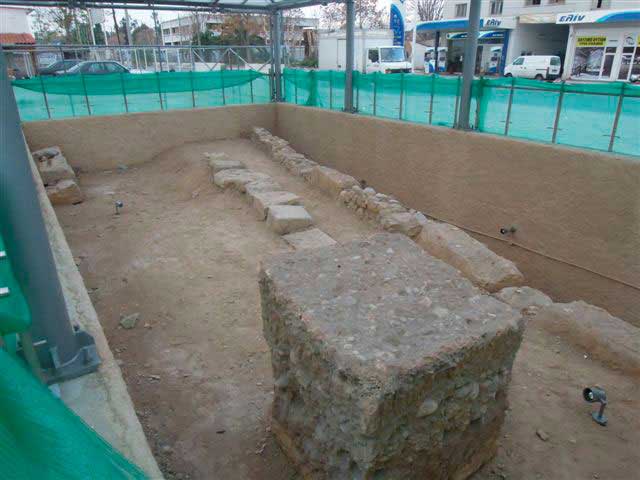 Archaeologists claim that most Athenians had walked the Iera Odos in antiquity. Now, thanks to the metro, modern Athenians will have the chance to follow the same route, only this time underground. During the archaeological excavations conducted, due to the metro stations’ construction, the biggest part of the ancient Iera Odos came to light, at the Egaleo station. Iera Odos connected Athens with Eleusis and, throughout its course, it followed the procession of the Eleusinian Mysteries during the celebrations for Demeter and Persephone.

The revealed part is framed by retaining walls and the cemetery built along the Iera Odos. Following the Odos, Greek archaeologists collected sarcophagus, cuttings, marks from an ancient wagon wheel, burial goods and other finds.

The line 3 extension to Egaleo, apart from the excavation of five successive layers, gave researchers the chance to survey the construction areas of the Eleonas station, as well as many ventilation shafts, and wells that were located in great depths, during the tunnel boring.

At the Eleonas station, three foundation “pedestals” of the ancient bridge belonging to the ancient Kifissos river were unearthed, while at the “Profitis Daniil” ventilation shaft part of the ancient Iera Odos was revealed, along with its retaining walls, which dates from the Geometric to the Post-Roman era.

As for the 17 showcases of the exhibition with excavation finds in the corridors of the Egaleo station, they help the visitor to get a glimpse of the history of the ancient Athenian city and renew his/her interest for one of the most significant roads of mankind.

Dozens of clay jugs testify that Attica had rich and exploitable resources of underground water. Lamps, loom weights, tools and kernoi (pots where they put fertility seeds), grave offerings from children burials in cemeteries of the Iera Odos attest for a wealth of lost treasures.

The most “fascinating” of all finds, however, as the Secretary General of the Cultural Ministry Lina Mendoni described it, were the bones of an unburied horse, which drowned in one of the Kifissos river floods. Based on the excavation data, the archaeologists assumed that it fought for its life until the end. It fell and was buried under heaps of alluvium, with its head slightly raised in a last effort to hold itself above the mud that soon covered everything.

The revealed part of Iera Odos was inaugurated this week at a small ceremony.