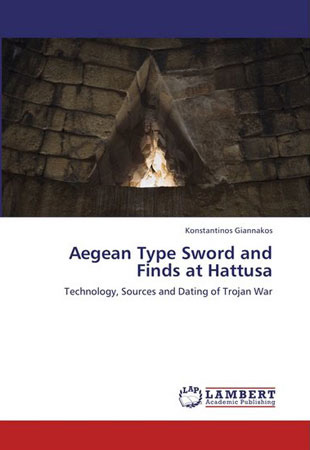 The finding of a sword of possible Mycenaean or Aegean origin of the Late Bronze Age, at Hattuša, dated ca. 1420-1400 BC, inspired the present research, which deals with the exchange of technological know-how between the regions around the Aegean Sea, as derived from the archaeological evidence and the ancient Greek literature. In the Egyptian archives, the names Keftiu, T/Danaja, Knossos, Mycenae, Ilion etc. were read. T/Danaja appear from the 42nd year of the reign of Pharaoh Thutmose III up to the end of the reign of Pharaoh Tutankhamun. In the Hettitic tablets the active military presence of Mycenaean kings or aristocrats begin at ca. 1400 BC but after king Mursili II (ca. 1300 BC), the Mycenaeans lose control over Milawanda/Miletus and seem to act through local military representatives in Asia Minor. Technology and its “products”, when unearthed from archaeologists, are irrefutable witnesses of the technological level of each era and place, with decisive role in the show of power. The conclusions are based on the technological know-how in constructions and metal production, the material evidence and the ancient literature including a probable dating of the Trojan War.