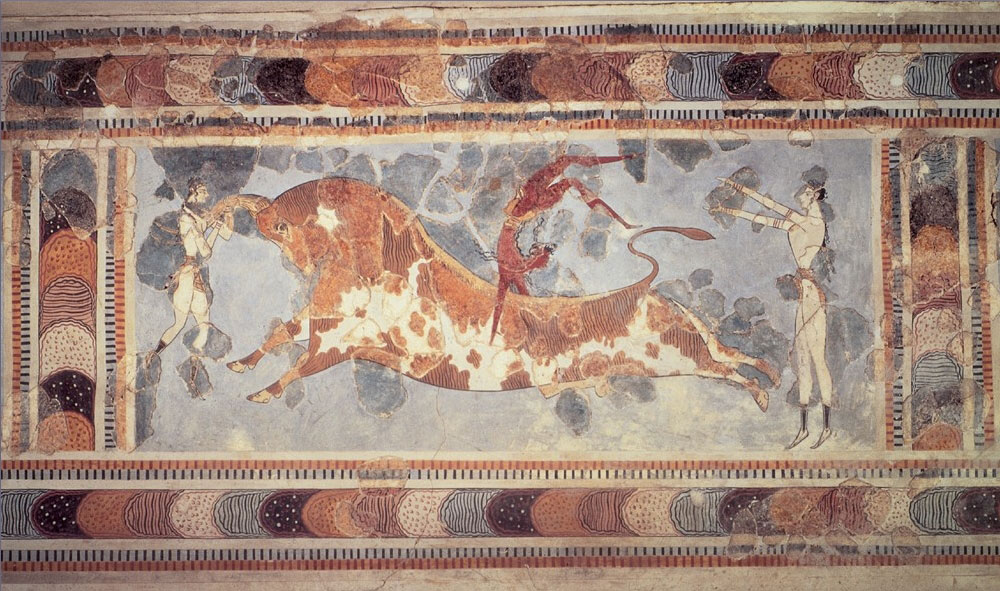 War was central to the Bronze Age people of Crete

Ancient Minoan civilization, one of the first in Europe, had strong martial traditions. Contrary to popular belief, Minoans were not a peace-loving people, argues Dr Barry Molloy of the University of Sheffield’s Department of Archaeology.

The British archaeologist, who has worked on excavation and other projects in Crete for many years investigating the Bronze Age people of the island, argues that war was in fact a defining characteristic of the Minoan society, and that warrior identity was one of the dominant expressions of male identity.

Dr Molloy, whose research paper is published in the Annual of the British School at Athens, found a “staggering” amount of violence in the symbolic grammar and material remains from prehistoric Crete. Weapons and warrior culture were materialised variously in sanctuaries, graves, domestic units and hoards. It could also be found in portable media intended for use during social interactions, for example, administration, feasting, or personal adornment.

“There were few spheres of interaction in Crete that did not have a martial component, right down to the symbols used in their written scripts”, says Dr Molloy. “When their world was uncovered it was deemed to be a largely peaceful society. In time, many took this to be a paradigm of a society that was devoid of war, where warriors and violence were shunned and played no significant role”.

“That utopian view has not survived into modern scholarship, but it remains in the background unchallenged and still crops up in modern texts and popular culture with surprising frequency”.

Dr Molloy’s curiosity was triggered about how such a complex society, controlling resources and trading with mighty powers like Egypt, could evolve in an egalitarian or cooperative context.

Building on recent developments in the study of warfare in prehistoric societies, the study of Minoan civilization (ca 2700-1420 BC) reveals, according to Dr Molloy, that “ideologies of war have permeated religion, art, industry, politics and trade, and the social practices surrounding martial traditions were demonstrably a structural part of how this society evolved and how they saw themselves.”

“The study shows”, Dr Molloy argues, “that the activities of warriors included such diverse things as public displays of bull-leaping, boxing contests, wrestling, hunting, sparring and duelling”.He also points out at the discovery of swords and other weapons inside sanctuaries, tombs and houses, the hunting scenes figuring men wearing shields and helmets, the discovery of seals figuring various weapons and warriors, the use of various symbols of weapons in the Minoan writing that has not been undeciphered yet, etc.

Even the famous Mycenaeans, heroes of the Greek Trojan War, took up the Minoan way of war – adopting its weaponry, practices and ideologies. “In fact,” says Dr Molloy, “it is to Crete we must look for the origin of those weapons that were to dominate Europe until the Middle Ages, namely swords, metal battle-axes, shields, spears and probably armour also.”

As for the limited number of fortresses discovered in Prehistoric Crete, a fact that has reinforced the belief in a peaceful Minoan society, the British archaeologist argues that it is rather due to the rough terrain morphology that must have been considered sufficient defence. Besides, he adds, this is why only few indications of ancient battles have been found.