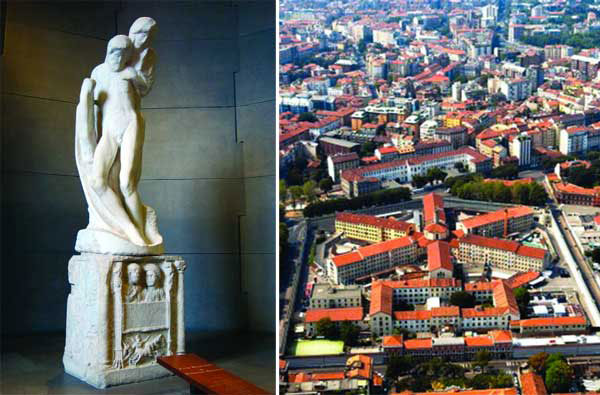 Michelangelo's masterpiece will be temporarily relocated

Due to urgent restoration works at the Castelle Sforzesco, Michelangelo’s La Pietà Rondanini will be moved to a Milanese prison, the Carcere di San Vittore. The castle houses the great unfinished sculpture since 1954, but the room it is being displayed in is regarded unsuitable for a work of this calibre. Visitors of the statue reach only 350,000 a year. After the castle has been renovated, La Pietà Rondanini will be placed in a specially designed hall in the old Spanish hospital of the castle.

As for the temporary lodgings of the work of art, the Carcere di San Vittore was built in the 19th century. It has a radial structure with a panopticon at its centre. The sculpture will be put at the heart of the panopticon, so it will be visible from all of the prison’s wings. The public may also be allowed to visit the work, as Stefano Boeri, Milan’s culture commissioner, has told the Italian press.

The supporters of the project believe that La Pietà Rondanini will have a positive impact on the psyches of the prisoners, many of which have never come into contact with works of art. Some art historians however are against it, as Vittorio Sgarbi, who argues that “masterpieces should stay in their respective homes”.

Though foreign prison officials and organisations that specialise in providing offenders with access to the arts welcome the project, Rachel Forster, who teaches art at HMP Wakefield, believes that “it would not be enough to just display the piece and then expect it to somehow make something happen”.