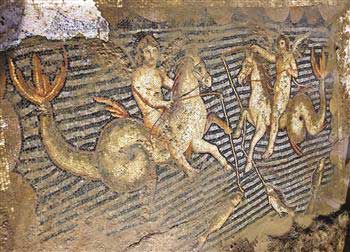 Archaeologists say the mosaic is unique

A mosaic of two Eros figures fishing on two hippocampi has been located in the southern province of Adana’s Yumurtalık district. Turkish archaeologists claim it is the one and only in the world.

It is made of marble, glass and stone, and is estimated to date back to the late Roman or early Byzantine era.

The Eros mosaic was found within a villa, which came to light during the escavations initiated by the Adana Museum Directorate. Archaeologists believe that the villa was owned by a top state official.

Yumurtalık Deputy Mayor Erdol Erden said: “We found young and adult Eros figures in the villa. Experts say that these figures were the first and only such figures in the world.”