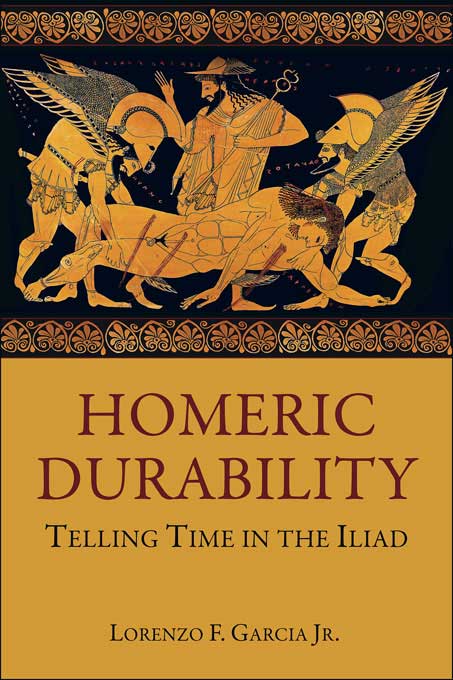 Telling Time in the Iliad

The Center for Hellenic Studies is pleased to announce the publication of Homeric Durability: Telling Time in the Iliad, by Lorenzo F. Garcia, Jr.

The Iliad defines its poetic goal as preserving the kleos aphthiton, “fame unwithered,” (IX.413) of its hero, Achilles. But how are we to understand the status of the “unwithered” in the Iliad?

In Homeric Durability, Lorenzo F. Garcia, Jr., investigates the concept of time and temporality in Homeric epic by studying the semantics of “durability” and “decay”: namely, the ability of an entity to withstand the effects of time, and its eventual disintegration. Such objects —the ships of the Achaeans, the bodies of the dead, the walls of the Greeks and Trojans, and the tombs of the dead— all exist within time and possess a demonstrable “durability.” Even the gods themselves are temporal beings. Through a framework informed by phenomenology, psychology, and psychopathology, Garcia examines the temporal experience of Homer’s gods and argues that in moments of pain, sorrow, and shame, Homeric gods come to experience human temporality. If the gods themselves are defined by human temporal experience, Garcia argues, the epic tradition cannot but imagine its own temporal durability as limited: hence, one should understand kleos aphthiton as fame which has not yet decayed, rather than fame which will not decay.

Lorenzo F. Garcia, Jr. is currently an assistant professor of classics at the University of New Mexico.