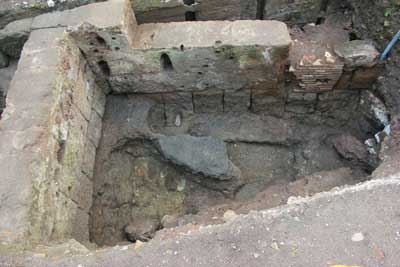 Italian archaeologists claim to have found the Temple of Jupiter Stator (8th century BC) at the foot of the Palatine Hill.

The temple was built by Romulus after a battle in the Forum area between Romulus and the Sabines. During the battle, the Romans were forced to retreat up hill on the Via Sacra, when Romulus prayed to Jupiter. After that the Romans managed to defeat the Sabines.

The ruins of the temple dedicated to Jupiter Stator (Jupiter the Stayer, that is “preserver and supporter” of the Roman state), were found by a archaeologists of the Rome University. The team is led by Andrea Carandini. “We believe this is the temple that legend says Romulus erected to the king of the gods after the Romans held their ground against the furious Sabines fighting to get their women back after the famous Rape (abduction),” Carandini said to the Archeologia Viva journal. “It is also noteworthy that the temple appears to be shoring up the Palatine, as if in defence,” Carandini added.

Legend says that after Romulus founded Rome in 753 BC, the Romans abducted Sabine women to populate the newly built city. The “Abduction of the Sabines” been illustrated in art down the centuries.

The Palatine hill overlooking the Forum was the place where Rome’s rich and powerful chose to live. Long after its legendary institution by Romulus, the cult of Jupiter the Stayer fuelled Roman troops in battle, as Stator embodied the divine force that made soldiers hold their position in battle.

In the article of Archeologia Viva, Carandini’s team said they might also have discovered the ruins of the last Palatine house Julius Caesar lived in – the one he left on the Ides of March, 44 BC, on his way to death in the Senate.