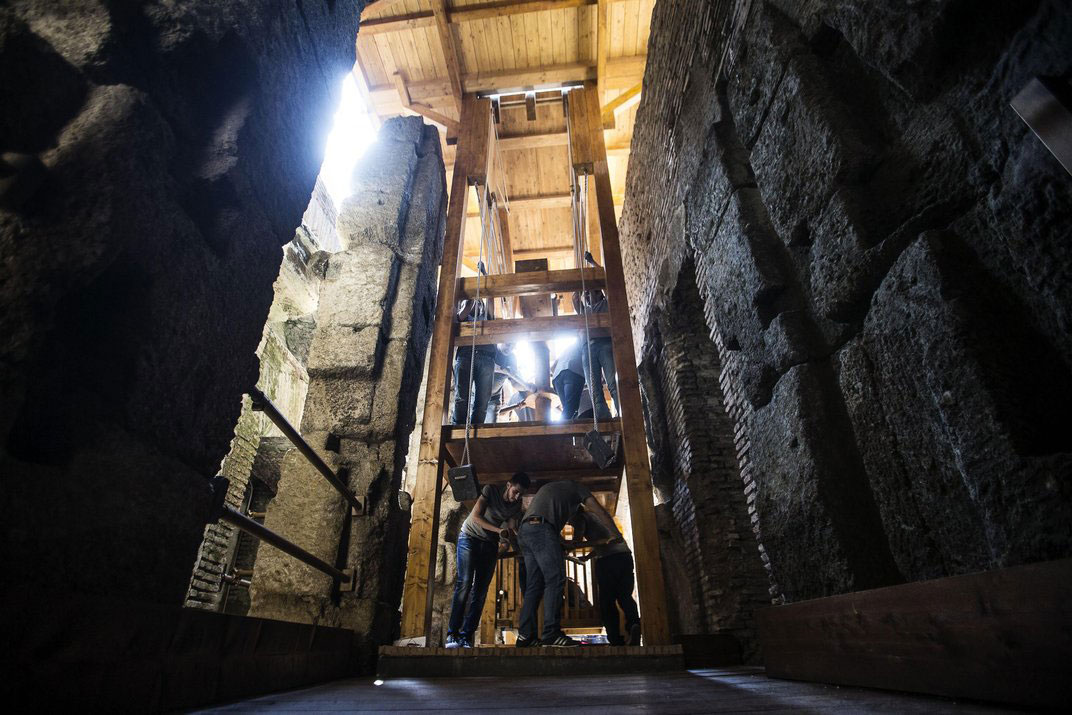 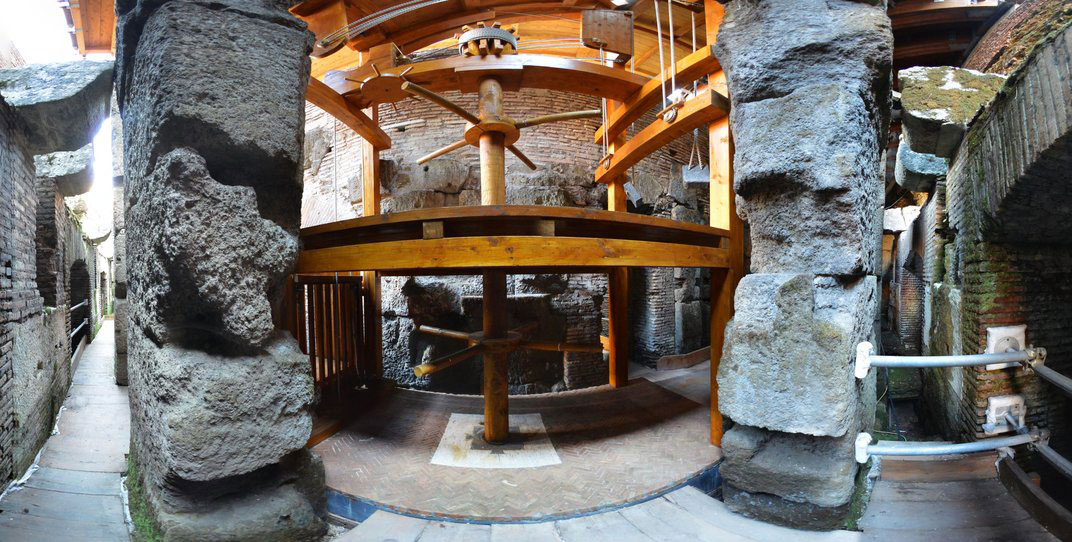 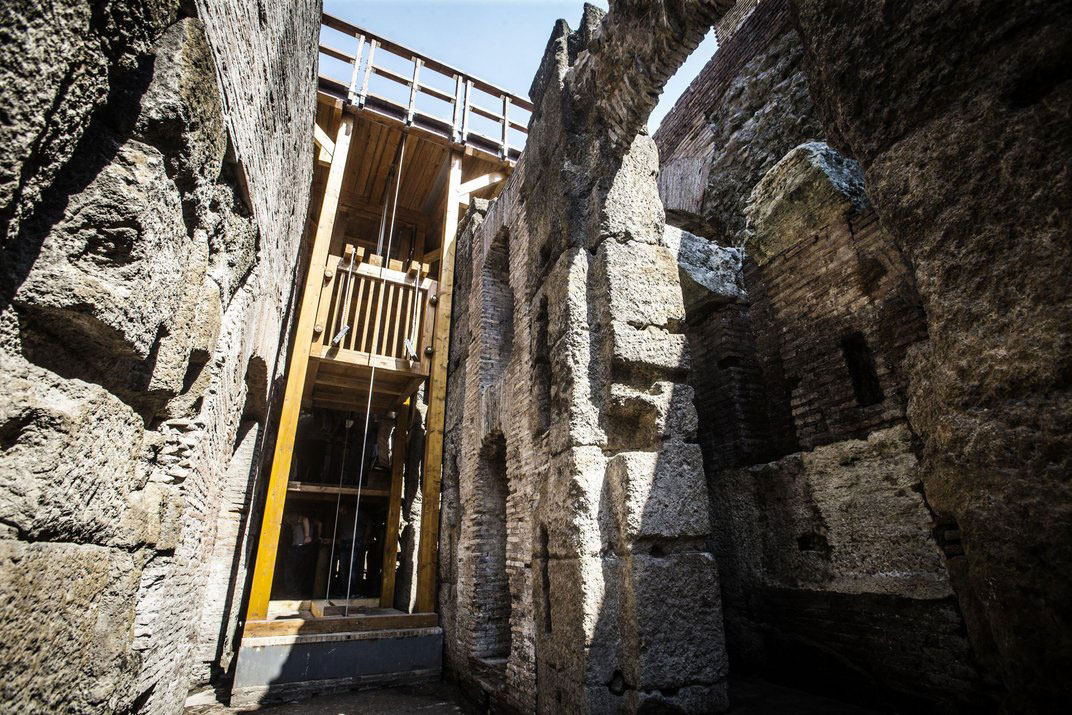 How ancient Romans lifted wild animals into the Colosseum

From the hypogeum to the arena

It is the 1st century AD and 50,000 screaming ancient Romans are crammed into the tight seats of the Colosseum, then officially called the “Flavian Amphitheater.” As the din of the rowdy crowd grows louder, the gladiators in the arena brace themselves for what’s about to come. All of sudden, the spectators erupt as wild beasts emerge from trap doors in the Colosseum’s floor. Lions, wolves, leopards and bears arise out of seemingly hidden holes in the ground. Swords are raised and fangs are flashed as the bloody, gruesome battle between man and beast begins.

Nearly 2,000 years later, the Colosseum remains an iconic structure and symbol of Rome. While gladiatorial games haven’t happened here in over a millennium, a new addition to the already immensely popular Colosseum historical site allows visitors an extra glimpse into the past. In early June, the Superintendent of Archaeological Sites in Rome and the Minister of Culture of Italy officially unveiled a nearly exact replica of the lift and trap-door system that transported ferocious beasts from the passageways and dens under the Colosseum, known as the hypogeum, up to the arena.

Built last May by Providence Pictures for their PBS documentary “Colosseum: Roman Death Trap” (which aired in February), the producers of the film donated the contraption to the Colosseum in hopes of helping visitors better relate to the Roman experience. Gary Glassman, the film’s director and producer, says: “We created a window in which people can get a glimpse into what it might have been like to be one of 50,000 spectators 2,000 years ago watching animals appear magically from beneath the arena.”

In the late 1990s, Heinz-Jürgen Beste of the German Archaeological Institute in Rome was studying the hypogeum when he started finding patterns, holes, notches and grooves in the walls. From there, he “connected the dots of the negative space,” Glassman explained. He soon discovered the spaces were for a system of capstans and lifts used to transport heavy loads, i.e. wild animals or scenery, to the floor of the Colosseum.

Further investigation revealed that there were somewhere between 24 and 28 lifts specifically designed to transport up to 600 pounds each—the average weight of two lions. “Can you imagine 56 lions emerging into the Colosseum at once?” Glassman asks.

The lifts required an immense amount of manpower to operate, with up to eight men needed to turn the heavy wooden shaft. If all the lifts were operating at once, they would require more than 200 men pushing and pulling. Glassman has a theory who these men were: “I think they were actually very trained stage hands. On some of the capstans, you can see Roman numerals—numbers—and Heinz Beste believes that they were probably a series of stage managers who were calling out cues to the different numbered lifts to let them know when they should let the animals loose.”

Using Beste’s findings and ancient texts (including the works of Vitruvius) as guides, Glassman and the documentary team constructed the lift over about a year using only tools and materials—save for a few metal screws—that would have been available to the Romans during that time period. In fact, the team was so concerned with the authenticity of the capstan that they harvested the wood from a forest in the Sabina region outside of Rome, an area the ancient Romans might have used.

At 23 feet tall, weighing two tons and capable of carrying over 600 pounds, the lift and trap-door mechanism is quite a hefty piece of machinery. After construction, it had to be craned into the Colosseum. The documentary team even put the lift into practice in the film, releasing a wolf onto the Colosseum’s floor. It was the first time a wild animal had been lifted up into the Colosseum in over 1,500 years. Thankfully, instead of being greeted with a battle, the wolf was rewarded with a tasty biscuit.