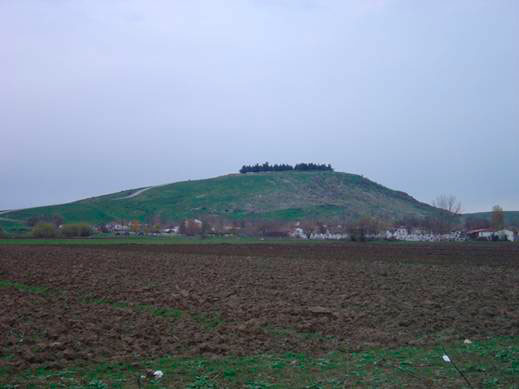 By the Director of the 34th EPCA Maria Vaiopoulou

Anyone visiting the Regional Unit of Karditsa and Thessaly for the first time will notice the small hills, which lay in the midst of the Thessalian plain. The majority of these hills are artificial. In Thessaly they are called Magoules (tells). Apart from rare exceptions, where they are burial mounts –and one can distinguish them by their bigger size–, these hills are prehistoric settlements. Most of them date back to the Neolithic Era, while in some cases they show continuous habitation, reaching back to the Bronze Age and rarely to the Historical Times – but in this case with significant discontinuities in habitation.

These facts are mentioned in a study written by the Director of the 34th Ephorate of Prehistoric and Classical Antiquities Maria Vaiopoulou. The study makes special reference to the National Road of Athens-Karditsa: “Approximately 20 km from Karditsa we come across one of the best known tells of Western Thessaly, the Magoula Pazaraki or Magoula Agiou Visariona. It is a typical example of a prehistoric Magoula, which –except for some discontinuities– shows uninterrupted habitation. During the excavations conducted there at the end of 1960s, directed by G. Chourmouziadis, Professor of the Aristotle University of Thessaloniki, habitation layers of the Middle Neolithic have come to light. The settlement was destroyed by fire. In 2006 the Magoula was cleaned and excavated by the 34th EPCA. A Middle Neolithic layer of habitation was located, and the foundations of a Hellenistic period temple were revealed. Architectural material from the Hellenistic temple was re-used for the erection of an Islamic shrine. The area was used as an Islamic cemetery during the Post-Byzantine era”.

The national road passes over the Magoula, dividing it into a northern and a southern part. The road probably existed during the Post-Byzantine era. When the new road was built in 1957, its course followed that of the previous one.

At the southern part of the Magoula, there is a very well preserved Ottoman bath. It lies by the side of the road and is easily accessible. Next to the bath, a Hellenistic era wall was located, which probably belonged to a public building.

As we continue towards Karditsa, Mrs. Vaiopoulou explains, we take a right turn near Sofades, to the south-west, following the provincial road which leads to Kedros. The first stop is the Sanctuary of Athena Itonia in Filia. This is one of the most important archaeological sites of the Karditsa region. In Antiquity it was the pan-thessalian sanctuary of Athena Itonia. The oldest findings date back to the Post-Helladic era, commonly known as the Mycenaean period. There are indications that the sanctuary was still in use during the Archaic period, and also in the Classical, the Hellenistic and the Roman era. During the Early Christian period, the area had been dedicated to a Saint, and a marvelous three-aisled basilica with mosaic floors was built there. For the church’s erection they used building material from the Hellenistic and Roman temple. A destruction layer with thick ash and offerings, which came to light during the archaeological survey, proves that in the 7th century BC a fire took place. The layer also confirmed the sources which mention the Sanctuary as a Sacred Grove, where pilgrims coming from the Thessalian region and from all parts of the country, hung their votive offerings on the trees.

As the archaeologist said to AMNA, this sanctuary has a “double meaning”: it is the Sanctuary of all Thessalians, and the cult place of a deity of purely Thessalian origin. This goddess was Itonia, a deity of the Underworld. Apart from the Sanctuary of Filia, two more sanctuaries are known to us which are connected to Itonia: one on Amorgos island and the other in Boeotia. The sanctuary of Boeotia was built by inhabitants of Thessaly, when they were forced to abandon their homes at the end of the Mycenaean era, fleeing from the Thessalian tribes coming from Epirus. The Thessalian conquerors respected the sanctity of the area. Eventually the sanctuary of Itonia became a pan-thessalian sanctuary, and gradually Itonia, a previously independent deity, became attached to Athena, thus evolving from a goddess of the Underworld to a goddess of war: Itonia Athena. At a distance of 100 m to the north of the main excavation area, the remains of a big Roman era building (3rd century AD) came to light. Only two rooms were investigated, the floors of which are decorated with mosaics containing geometric motives and made of marble stones.

In a field lying north-east of the enclosed space, a wall was revealed. The excavator assumes it is a retaining wall or an enclosure, marking the boundaries of the sanctuary to the east, during the Roman era.

After Filia, the visitor can continue to the south-west, towards Kedros, where he will come across Orthi. This name originates from Homer, although archaeological finds lead to the conclusion that the city was built in the Classical Era, and also existed during the Imperial period, according to Mrs. Vaiopoulou. The Classical period acropolis is located at the “Chelonokastro” site. The fortification reveals the course of the wall that enclosed the city and a cross-wall traversing the interior of the older city, thus restricting, during Hellenistic period, the part lying on the plain. Within the ancient city, one of the fortification gates can be seen. On the hill of Agios Nikolaos architectural remains, and part of the Hellenistic city walls are preserved.

We go back –the archaeologist writes- to the National Athens-Karditsa Road. After the railway bridge of Kalambaka-Palaiofarsala, to the north of the national road, the Oglas hill dominates the landscape, and, at a short distance, lies the Makrya Magoula [the Long Magoula]. On this tell, architectural remains were located, which date back to the Late Bronze Age (Mycenaean). In the same area, the Mycenaean Arne is being located. For reasons, which the archaeologists were not able to confirm yet, the settlement was gradually abandoned and transferred close to the Oglas site.

At the top of the Oglas hill, the walls of the Kierion acropolis can be seen, which surround the top of the hill. The average width of the acropolis’ walls reached 2 m., and 3,5 m. on the plain. At the north-eastern, the southern and the west side of the Acropolis, massive towers stood. Within the acropolis, along the inner profile of the walls, and parallel to them, the remains of buildings are preserved. The walls of the Kierion acropolis show various building phases, from the Late Bronze Age, and the Archaic, Classic, Hellenistic and Roman times. The walls continued at the plain and enclosed the city. The walls on the plain were surrounded by a trench, part of which is preserved to the east and south-east.

Architectural remains of big buildings are located at the eastern and southern slopes of the hill. These remains date back to the Mycenaean era until the Roman Era. They were revealed during rescue excavations within the boundaries of the modern settlement. During the first half of the 4th century BC, the city becomes the capital of Thessaliotis, and the first bronze and silver coins are being issued, bearing the inscription “KIERIEON”. Kierion also participated at the second Thessalian League which was re-founded by the Roman commander Titus Flaminius in 197/196 BC.

Kierion remains an important city from the Hellenistic until the Roman period, while it possibly ceases to exist in the Early Christian Times.