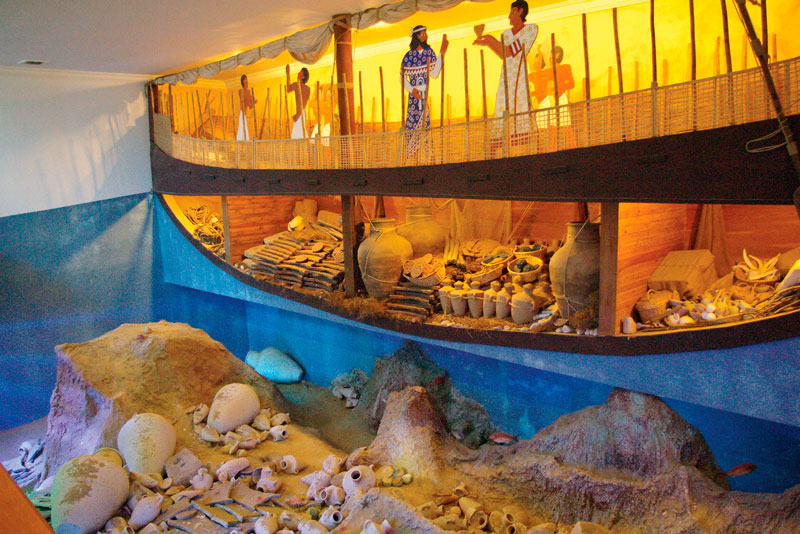 The “Melissa” Publishing House organizes a series of annual lectures in memory of its founder, Giorgos Ragias. The lectures will be given by internationally recognized scientists at the Acropolis Museum, in the beginning of spring, each year. The topics of the lectures will cover Greek history, arts and architecture, which are also the field Melissa specializes in.

On Thursday, March 14th (7.00 p.m.) the first lecture will by given by Professor of Maritime Archaeology Cemal Pulak. The lecture is titled: “Discovering the oldest seafaring ship” (The Shipwreck of Late Bronze Age at Uluburun, Turkey, end of 14th century BC).

The lecture will be prefaced by Emeritus Professor of Athens University Christos Doumas.

The shipwreck widely known as “the Uluburun shipwreck” was discovered in the summer of 1982 by a local sponge diver close to the east shore of Uluburun (Grand Cape) in the Antalya region of southwestern Turkey. From 1984 to 1992 eleven archaeological campaigns took place in the area, totaling 22,413 dives, in order to reveal in its full extent one of the most spectacular Late Bronze Age assemblages to have emerged from the Mediterranean Sea. The Institute of Nautical Archaeology (INA), an international organization, was founded in 1984 and started its underwater surveys in July of the same year. The surveys were supervised by the Institute’s founder George F. Bass. From 1985 to 1994, Cemal Pulak was the head of the archaeological surveys at the Institute.

Based on the evidence provided from the cargo on the ship, it can be assumed that the ship set sail from either a Cypriot or Syro-Palestinian port in 1305 BC. The Uluburun ship was undoubtedly sailing to the region west of Cyprus, when it sank. Her ultimate destination was perhaps Rhodes, which was at the time an important redistribution center for the Aegean. Its vast cargo has yielded a unique picture of the richness and diversity of eastern Mediterranean maritime trade at the end of the Bronze Age with items sourced from at least nine different cultures – Canaanite, Mycenaean, Egyptian, Cypriot, Nubian, Baltic, Northern Balkan, Babylonian, Assyrian, Kassite etc. (Pulak C., 1998, «The Uluburun shipwreck: an overview», The International Journal of Nautical Archaeology 27, p. 188-224).

Since the completion of the archaeological excavations in 1994 on the sea floor of Uluburun, all efforts have been concentrated on conservation, study, and sampling for analysis in the conservation laboratory of the Bodrum Museum of Underwater Archaeology, where all the finds of the shipwreck are being kept.

Dr. Cemal Pulak is Associate Professor of Nautical Archaeology at the Texas A&M University. He is also Vice-President for the Institute of Nautical Archaeology. He specializes in Bronze Age seafaring, maritime trade, and technology, and is currently involved with the research and publication of his latest shipwreck excavation, the Late Bronze Age shipwreck at Uluburun, Turkey. His related areas of interest are ship construction, shipping, and nautical archaeology of the eastern Mediterranean from prehistoric to post-medieval times. He has been directing INA’s annual shipwreck surveys in Turkey since 1982, and has conducted extensive research in the Mediterranean and the Aegean.