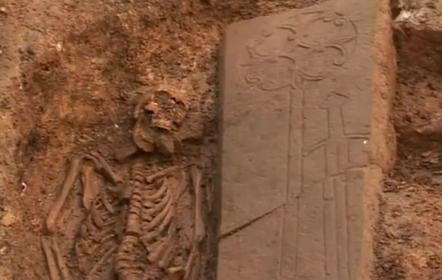 Another exhiting discovery, now in Scotland

The remains of a medieval knight found by construction workers in a Edinburgh, Scotland parking lot is gaining interest across the social networks today according to Thursday, March 14 reports on the UPI.

The medieval knight was found last Wednesday by construction workers who called in the archaeologists. The knight’s remains, the 500-year old skeleton of an adult man, were found in a sandstone slab that was carved with a cross and sword, a medieval sign of nobility. Archaeologists reveal that they will focuse on the corpse’s teeth and bones to determine more detail on the man’s life and cause of death.

The workers were clearing a former parking lot located behind the University of Edinburgh, when they made the amazing discovery. The find also brigs to mind the recent well-advertised discovery of the remains of King Richard III, also in a parking lot in construction in Leicester, England.

The nobleman is believed to have been buried near the foundations of a 13th century Blackfriars Monastery. The excavation has also revealed the exact location of the monastery, which was founded in 1230 by Alexander II (King of Scotland 1214-49) and destroyed during the Protestant Reformation in 1558.

“We obviously knew the history of the High School Yards site while we were studying here, but I never imagined I would be back here to make such an incredible discovery,” Headland Archeology’s Ross Murray, a former student at the University, told The Scotsman.