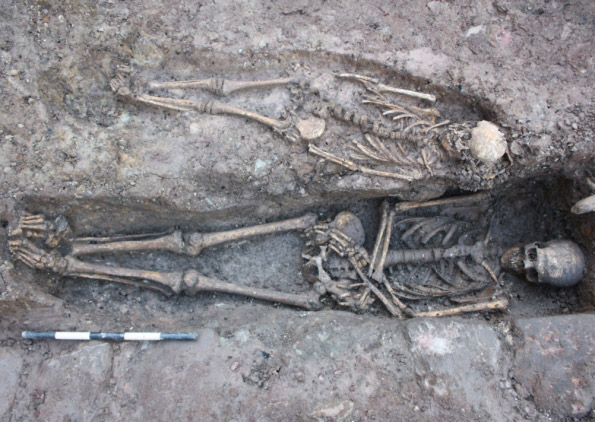 Tales from the Crypt

Seven more skeletons were unearthed from a knight’sgrave found around a month ago under a car park in Edinburgh, making archaeologists believe that the tomb was actually a family crypt.

The skeletons found alongside the one of the knoight were those of a three adults and four infants. A scull has also been found without its body. “The skull of the skeleton found immediately beneath the location of the knight looks like that of a female and the remains found on the other side of the ornate slab belong to an infant from the same period.”, says chief archaeologist Ross Murray, of city-based Headland Archaeology, hinting that the bodies could be connected with blood ties. “These new finds look likely to be the possible relations of the suspected medieval knight we found earlier this year”, he states.

The tomb has been found near the Blackfriars Monastry, espablished in 1230 by Alexander II and destroyed during the Reformation. However, this location continued to be key to the city of Edinburgh -it later hosted two more historic buildings, the Old High School founded in the 1700s and the 16th-century Royal High School.