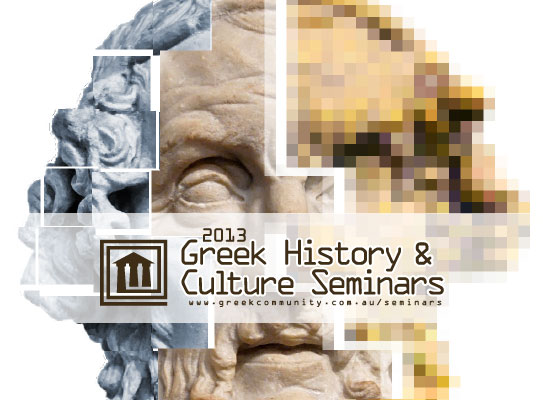 An initiative of the Greek Orthodox Community of Melbourne and Victoria

One of the bright spots of the Greek Orthodox Community of Melbourne and Victoria’s cultural initiatives over the last few years has been its History and Culture seminars. These seminars have not only attracted a loyal following of enthusiasts but they have been embraced by many newcomers of varying ages and backgrounds.

This is one of the GOCMV’s main goals, to expand its reach by attracting more people of both Greek and non-Greek background to its events. The formula is simple, quality speakers and interesting topics that appeal to a wide audience. After two very successful years, this year’s organising committee has quite a challenge ahead in maintaining the existing high standards. The group is quietly confident in delivering a strong program that will not only meet but surpass people’s expectations.

The seminar series was launched on Thursday 21st March by Ms Eleni Lianidou, Consul General for Greece in Melbourne and Professor Nikos Papastergiadis, with the first lecture being delivered by La Trobe University’s Professor Chris Mackie on Homer.

Although one of the aims of the series is also to provide a platform for showcasing the research work and expertise of local speakers not widely known to the community, the quest for talented speakers hasn’t been restricted to Melbourne’s shores. This year’s program will also see the inclusion of several interstate and overseas speakers.

One thing different about this year’s seminars will be the location as a result of the GOCMV’s Lonsdale Street premises not being available as construction works have begun on the Community’s new cultural centre. The new location, the Kelvin Club in Melbourne Place opposite the Russell St Greater Union cinemas, may surprise many but it’s probably one of Melbourne’s undiscovered gems for hosting events.

An ‘antiquity-classical Greece’ subject matter will be the dominant theme of the first term seminars running until the end of May. Mycenaean Greek society, Sexuality in Ancient Greece and Greek Colonies in Southern Italy will be some of the topics covered. The first term will also be sprinkled with a handful of special lectures that have been elevated to Antipodes Festival Event status and be held at the Wheeler Centre, a venue with greater capacity. Two examples are the lectures by Sydney-based Professor James Arvanitakis and Associate Professor Nicholas Doumanis. Arvanitakis, a recent recipient of the Prime Minister’s University Lecturer of the Year Award, will be speaking on ‘The Future of Education: Virtual Universities in a Virtual World’. Historian Nicholas Doumanis was awarded the London Fraenkel Prize for his book Myth and Memory in the Mediterranean, a book based on his doctoral dissertation examining the Italian presence in the Dodecanese Islands. He will speak on ‘Muslim-Christian Coexistence and its Destruction in Late-Ottoman Anatolia’, a lecture quite timely if one considers the recent rise of sectarian violence in numerous parts of the globe.

There will be a special ANZAC Day commemorative lecture given by Perth-based Dr John Yiannakis looking at the marginalisation of the island of Lemnos in the discourse of Australia’s Gallipoli campaign. One can expect an interesting lecture on the socio-economic and political evolution of post-1974 Greece given by Thessaloniki-based and one time Melbourne resident freelance journalist Kostas Karamarkos. Kostas Karamarkos has been very close to the pulse of Greek political decision-making during recent years and should provide some fascinating insights.

The mid-year seminars will cover themes pertaining to the Byzantine and Ottoman periods, while the final third term will focus on Modern Greece and its Diaspora. The GOCMV’s website will be hosting regular updates on the series. The breadth of subject matter to be covered is certain to entice many attendees. Those who attend on a regular basis will also be provided with certificates of participation.