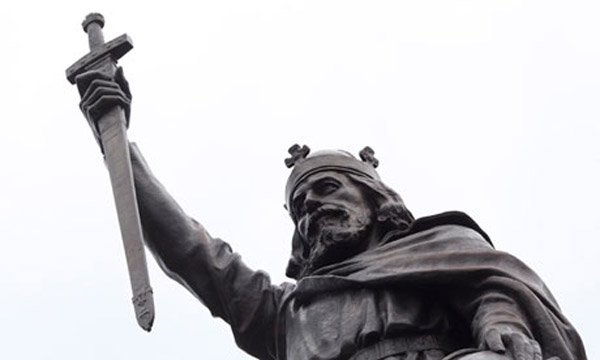 God Save the King

Bones supposedly belonging to the British King Alfred the Great  (AD871-899) have been exhumed from an unmarked grave in Winchester’s St Bartholomew’s church in order to be protected from prospective tomb-raiders thrilled by the discovery of Richard III’s grave.

“Of course, that would only be granted if the court were satisfied with everything proposed, both legally and ethically. Whatever happens, the remains will stay in the care and protection of the church and the consistory court until they are reinterred.”

Alfred, King of the West Saxons, a younger son of King Ethelwolf of Wessex, is seen as the first man referred to as “the king of the English” and the only English monarch bearing the epithet “the Great”. He was famous even in his day for his victories over the Danes, and his interest in scholarship, law-making and good government.

His body was first buried near Winchester Cathedral, moved at least once there, then moved again to Hyde Abbey in a great procession in 1110. As in Leicester, that church was destroyed in the dissolution of the monasteries, and his remains too were assumed to lie under a modern car park which had previously been the site of a prison. In 1999 there was great excitement when archaeologists found the foundations of abbey buildings, and then a human bone – which was later proved to be that of an elderly woman. It seems that the bones were most likely scattered during the 18th-century building work, and possibly ground up for bonemeal fertiliser for the prison governor’s garden!

However, some believe that the bones were moved again, to the nearby burial ground of St. Bartholomew’s. As a result, the grave in the church’s burial ground was discreetly excavated down to the bare earth on Monday night and Tuesday morning.

Academics  might want to do more work on the bones, which the diocese says are now being held in a secure place. However, identifying Richard was a tortuous process; finding conclusive evidence of the identity of a man who died more than 1,000 years ago might take a miracle.