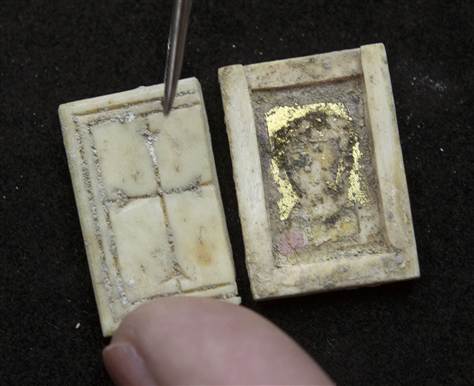 A tiny, exquisitely made box found on an excavated street in Jerusalem is a token of Christian faith from 1,400 years ago, Israeli archaeologists said Sunday.

The box, carved from the bone of a cow, horse or camel, decorated with a cross on the lid and measuring only 0.8 inches by 0.6 inches (2 centimeter by 1.5 centimeter), was likely carried by a Christian believer around the end of the 6th century A.D, according to Yana Tchekhanovets of the Israel Antiquities Authority, one of the directors of the dig where the box was found.

When the lid is removed, the remains of two portraits are still visible in paint and gold leaf. The figures, a man and a woman, are probably Christian saints and possibly Jesus and the Virgin Mary.

The box was found in an excavation outside the walls of Jerusalem’s Old City in the remains of a Byzantine-era thoroughfare, she said. Uncovered two years ago, it was treated by preservation experts and extensively researched before it was unveiled at an archaeological conference last week.

The box is important in part because it offers the first archaeological evidence that the use of icons in the Byzantine period was not limited to church ceremonies, she said.

Part of a similar box was found three decades ago in Jordan, but this is the only well-preserved example to be found so far, she said. Similar icons are still carried today by some Christian believers, especially from the eastern Orthodox churches.

The relic was found in the City of David excavation, a Jerusalem dig named for the biblical monarch believed to have ruled a Jewish kingdom from the site.

The politically sensitive dig is located in what is today the Palestinian neighborhood of Silwan, just outside the Old City walls in east Jerusalem, the section of the holy city captured by Israel in the 1967 Mideast war and claimed by the Palestinians as their capital.