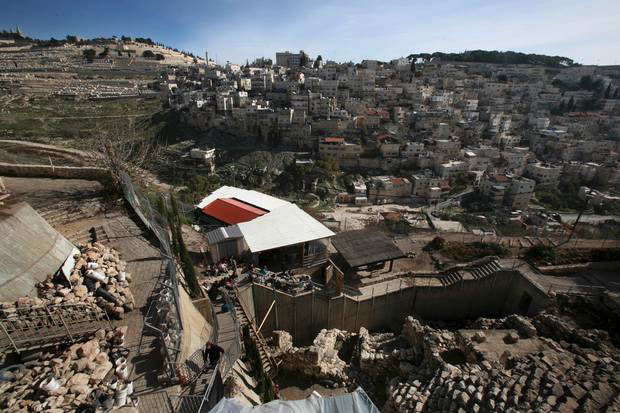 “Pseudo-Biblical” theme park at the City of David

A hard-line Israeli group said on Tuesday it was launching plans for a new tourist center at the site of a politically sensitive archaeological dig in a largely Arab neighborhood outside Jerusalem’s Old City, drawing fire from Palestinian officials.

The project’s sponsor, the Elad Foundation, said the new visitors center and parking garage will be built above a section of the excavation area known as the City of David, leaving the ruins below accessible. The foundation said no additional land beyond the current excavation site would be used and that construction, which must pass several zoning committees, was still several years away.

Israeli archaeologists at the City of David, named for the biblical monarch thought to have ruled from the spot 3,000 years ago, are investigating the oldest part of Jerusalem. Finds there linked to life and ritual in ancient Jerusalem regularly make international headlines, and the dig has become one of Jerusalem’s most popular tourist attractions.

The site is just outside the Old City walls at the edge of the neighborhood of Silwan in east Jerusalem, the part of the city the Palestinian Authority says it wants as the capital of a hoped-for state.

Israeli construction in east Jerusalem is regularly subject to international criticism. Critics say the new plan will cement Israel’s hold on Silwan and could destabilize the volatile neighborhood, where Palestinian residents clash on occasion with Jewish residents and police.

“This is dangerous and the Israeli government should understand that,” said Adnan Husseini, the Palestinian Authority official responsible for Jerusalem.

Danny Seidemann, an expert on east Jerusalem who is critical of Israel’s policies in the city, said the plan would result in “a pseudo-Biblical theme park which radically changes the fabric of an existing Palestinian neighborhood.”

The Elad Foundation, which funds the dig, is associated with Israel’s settlement movement and also brings Jewish families into Silwan, whose population is overwhelmingly Arab. The effort is intended to assert what the group sees as Israel’s historic rights to the city and to keep it unified under Israeli control.

“The new center will serve tourists and visitors, Jews, Arabs, and anyone else coming to the City of David and the Western Wall,” said Udi Ragones, a spokesman for the Elad Foundation.

A spokesman for Jerusalem City Hall, Stephan Miller, said the plans would be discussed in a committee Wednesday and would then be open to public objections as part of the standard zoning process. That process typically takes between several months and several years.

“The city of Jerusalem accords great importance to the development of the tourist and archaeology site in the City of David, where hundreds of thousands of visitors and tourists visit yearly,” Miller said.