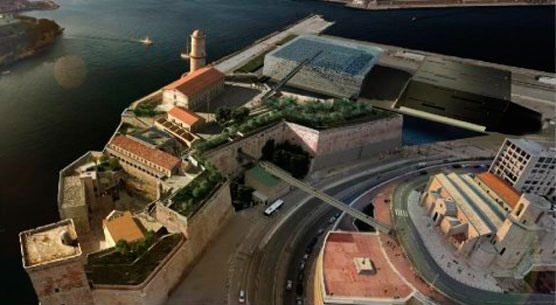 Greek antiquities at the new Museum of Civilisations

In an exhibition dedicated to the cultures of the Mediterranean, hosted for three years at the Museum of Civilisations from Europe and the Mediterranean (MuCEM) in Marseille, 40 Greek works of art from Athenian museums, such as the Acropolis Museum, the National Archaeological Museum, the Epigraphic Museum, the Byzantine and Christian Museum, as well as the collections of the Archaeological Museum at Heraklion (Crete), and the 25th, the 3rd, and the 15th Ephorates of Prehistoric and Classical Antiquities.

The loans of the antiquities are either long-term (April 2013-April 2016) or short-term (April 2013-December 2013 or 2014), as some of the objects will be exhibited throughout the three-year exhibition “The Gallery of the Mediterranean” and others for shorter periods of time. The museum, which will soon open its gates to the public, is located at the entrance to the Old Port of Marseille, and divided in two buildings “floating between water and sky.” The exhibition about the Mediterranean will be hosted on the ground floor of the J4 building of 15,000 m2, and will place the Mediterranean world in perspective with other comparable regions of the globe: the world located around the China Sea (Yellow Sea) or the Gulf of Mexico.

The Mediterranean, though it has never been a homogenous political entity, is nevertheless a basin of specific civilisations, organised around singularities. For this initial presentation, four of these features have been selected at the exhibition.

Birth of the Gods and the Invention of Agriculture

For ten thousand years, men have been domesticating nature. In the Mediterranean, they began to cultivate wheat and raise sheep, donkeys, cattle… From the animistic worlds of prehistory followed the polytheism of antiquity. The Mediterranean landscape was altered, transforming the flora, even modifying the fauna. This landscape though poorly suited for agriculture drove people to multiply their strategies for utilising space and maximising their harvest. From nature to the table, the Mediterranean people have adopted, over the last ten thousand years, a dietary balance that is today listed on the UNESCO World Heritage register. From the traditional Egyptian sakieh to the contemporary work of an Israeli artist on the distribution of water, all of the media and material tell the stories of agricultures, from their fragility to their mutations today.

Jerusalem is the place where the monotheisms meet. The City of David, it became the unique religious centre for the Hebrew people who settled there. It is also the site of the Passion, Resurrection and Ascension of Christ. It is as well where the Prophet Mohammed made his Night Journey. The fundamental role of the thrice holy city will be particularly illustrated by an exceptional model inlayed with mother-of-pearl representing the Church of the Holy Sepulchre, the delicate “paintings under glass” evoking the Night Journey of the Prophet carried by Buraq, and the Hanukkah lights. Productions of contemporary artists inspired by the light are also represented, such as the windows of Aurélie Nemours or the ecumenical work of Michelangelo Pistoletto.

The Invention of the Citizen and the Development of Democracy

Born in the Mediterranean, citizenship and democracy develop from values that concern the universal. From the Athenian citizen to the Tunisian blogger, from the merchants of the Italian Republics (Genoa, Venice…) to the Communard of Barcelona, this section will be illustrated by exceptional portraits in marble from the Roman era (from Palmyra) and by the refined 16th century paintings of the Venetian Doge among others. The MuCEM must testify to the advances and setbacks of democracy in the Mediterranean, question the respect for the rights of children, freedom of expression or access to education.

Since Antiquity, explorers, pilgrims, and travellers have made the Mediterranean of the seven wonders the destination of all their voyages; it was also the point of departure for the major discoveries that have linked the oceans, thereby reducing the imaginary space from the infinite to an inland sea. These long travels are answered by voyages towards the places of memory (pilgrimages), of knowledge and education (the Grand Tour), of wonder and leisure. Veduta, optical prints and contemporary installations, evoke, between the sky and water, the highlights of the Mediterranean. And to finish this journey through time and space, a monumental work especially in porcelain, of Anne and Patrick Poirier, evoking the seven wonders of the world.

These four chapters are not intended to be exhaustive, but rather to progressively illuminate a history of the Mediterranean.