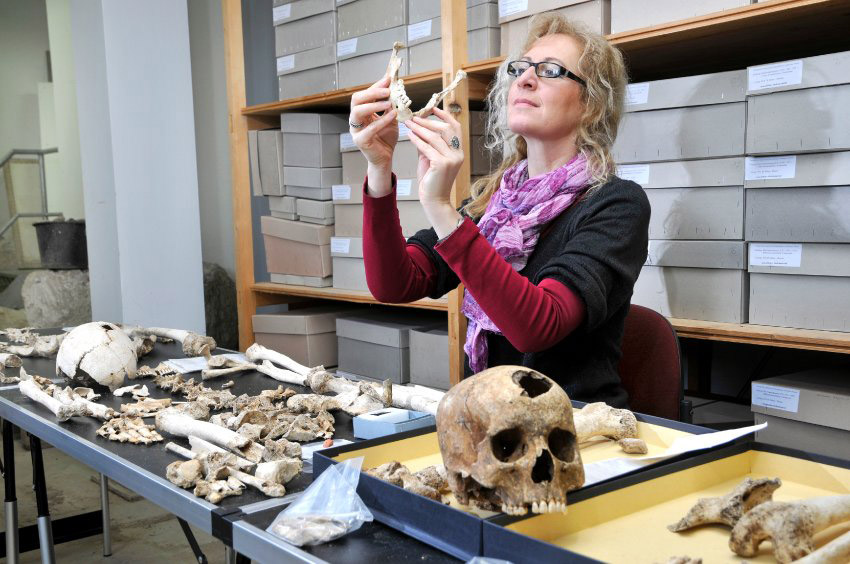 Archaeologists Dig into History of Execution

Marita Genesis, 42, is standing in a storeroom belonging to the Thuringia State Office for the Preservation of Monuments and pointing at a number of bones. These are the remains of thieves, sodomites and child murderers.

The skeletons were found near Alkersleben, not far from the eastern German city of Erfurt, where the counts of Kevernburg punished criminals over 700 years ago. Recently, Researchers have unearthed the remains of some 70 people, which are now undergoing an anthropological evaluation. One of the dead was tied up, another lay next to an iron strangulation chain. A third had been buried along with a sharp blade. “It could be the murder weapon,” says Genesis, who has just completed her dissertation on this execution site.

She is not alone in her research. Jost Auler, a historian from the western German town of Dormagen is seen as Germany’s “gallows king,” by his co-researchers. Having published three volumes on “execution site archaeology”, he is  considered as a pioneer of the movement. In his most recent book, released last November, nearly 40 fellow colleagues report on “beheading sites,” “tumbrels” (the vehicles used to carry the condemned to the execution site) and the trade in corpses destined for physicians’ dissecting tables.

The field is truly wide. Stories of the past reporting about using blood of executed outlaws for healing purposes and practices of spiking the head of famous criminals after decapitation might reflect aspects of our forepathers towards justice. But, in what extent? According to Auler, the key to the answer is the study of execution sites. And these are a lot!

An executioner’s scaffold rises seven meters (23 feet) into the air in the southeastern Austrian state of Styria, where an archaeological dig is to begin this spring. Farther north, in the Bavarian town of Pottenstein, a team is also investigating the decaying ruins of the local gallows. The evidence they find testifies to the brutality of the Middle Ages. The archaeologists often discover scattered remains. Many cities allowed miscreants to hang in the wind for years. At one point in time, 30 criminals were rotting together on the gallows in Augsburg, near Munich. Afterwards, they were tossed into small pits like garbage. Such perfunctory burials in unconsecrated ground were common.

Still, according to finds so far, the most common practice remained decapitation, requesting the condemned to kneel down, whereupon he or she received a massive blow from behind with a sword. In the 17th century, axes and chopping blocks came into fashion, to aid the executioners, who often missed their target. The body of a woman found near Berlin Brandenburg Airport with the scull lying on a lower leg bone (showing she had been decapitated) lacks all of her cervical vertebrae. Where was her neck? The archaeologists are still puzzled on what went wrong during her execution…

Still, the main job for the executioners remained hanging. “Most death sentences were carried out with the noose,” says Auler.

The status of the executioners

Though praised for doing “God’s work” in the “Sachsenspiegel” (“Mirror of the Saxons”), a legal code drafted in the 13th century, most executioners were ostracized by society. Executioner families only married among themselves. They wore gloves because no one wanted to touch them. Their profession was viewed as “disreputable,” and innkeepers often refused to serve them.

Despite their gruesome duty, they had the capacity to render animal corpses, castrate dogs and clean prisons. And they were well versed in the healing arts and surgery, in such a way that they were the ones to remove diseased body parts. Still they cannot be seen as skillful practical surgeons: they were infanmous for trading such body parts as a basis for magic remedies…

Decapitation or hanging followed by a burial on an unconsecrated ground wasn’t always enough for medieval proponents of torture and execution. To be on the safe side, witches were burned until nothing but ashes remained. Near the eastern German town of Alkersleben, a skeleton was discovered buried under a thick layer of stones. The man had apparently been weighed down to make it impossible for him to escape the grave. Perhaps he was a vampire.

That is how they died, the sinners of the past: tortured, clubbed and strangulated. “At the time, no one thought of resocialization,” says Auler. “It was all about atonement and deterrence.”