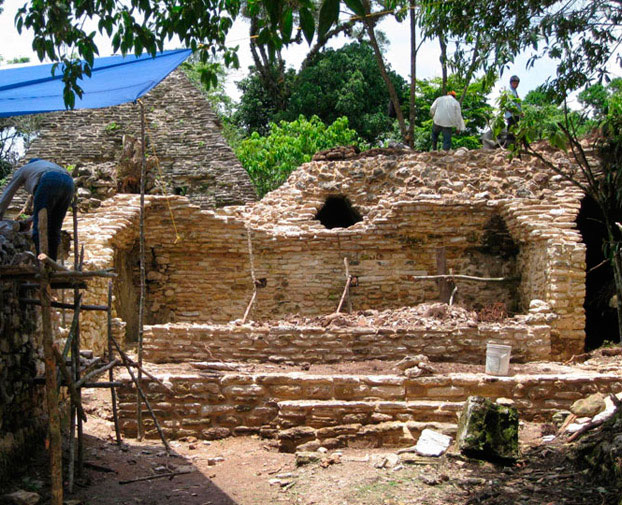 The unusual architecture makes the theater stand out

A unique Mayan theater has been unearthed in Mexico, according to researchers from the National Institute of Anthropology and History (INAH).

Found at the archaeological site of Plan de Ayutla, in Ocosingo, Chiapas, the 1,200-year-old theater did not seem to be a place for art and culture, but was rather used by Mayan elite to legitimize their power and subjugate local minority groups.

“It was a unique theater, since it was found in an acropolis, 137 feet above the other plazas. The stage lay within a palace complex,” Luis Alberto Martos López, director of the research project, said in a statement.

Located near the North Acropolis, the theater was enclosed by buildings dating to 250-550 B.C. on all sides. A 26-foot-long façade of one of these buildings was torn down around 850 A.D. to create the forum and make it work as an acoustic shell.

According to Martos López, the unusual architecture makes the theater stand out. “It’s different from all the other theaters that have already been studied. These theaters were usually located in plazas and were built to entertain the crowds,” Martos López said. In contrast, the newly unearthed theater seated 120 people at the most.

Near the amphiteater, Martos López’s team found whistles, ocarinas and sculptures depicting Mayan deities. They most likely decorated the frieze below the building. The scene probably represented the brutal ceremony of humiliation of prisoners, often ending in torture and decapitation.

Indeed, subjugation was the running theme at the theater. According to Martos López, around 850 A.D. a “multepal” or shared governance ruled in Plan de Ayutla and used political plays at the theater to impose their ideologies on local minority groups.

The theater might have also housed some sort of political rallies. “We found that a temple northeast of the stage was dismantled to leave space to a small podium for an orator,” Martos López said.