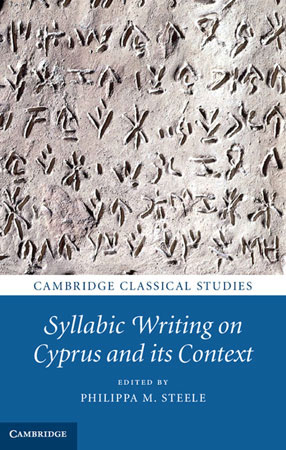 P.M. Steele (ed.), Syllabic Writing on Cyprus and its Context

A new and interdisciplinary treatment

This volume offers a new and interdisciplinary treatment of syllabic writing in ancient Cyprus. A team of distinguished scholars tackles epigraphic, palaeographic, linguistic, archaeological, historical and terminological problems relating to the island’s writing systems in the Late Bronze Age and Iron Age, from the appearance of writing around the fifteenth century down to the end of the first millennium BC. The result is not intended to be a single, unified view of the scripts and their context, but rather a varied collection that demonstrates a range of interpretations of the evidence and challenges some of the longstanding or traditional views of the population of ancient Cyprus and its epigraphic habits. This is the first comprehensive account of the ‘Cypro-Minoan’ and ‘Cypriot syllabic’ scripts to appear in a single volume and forms an invaluable resource for anyone studying Cypriot epigraphy or archaeology.