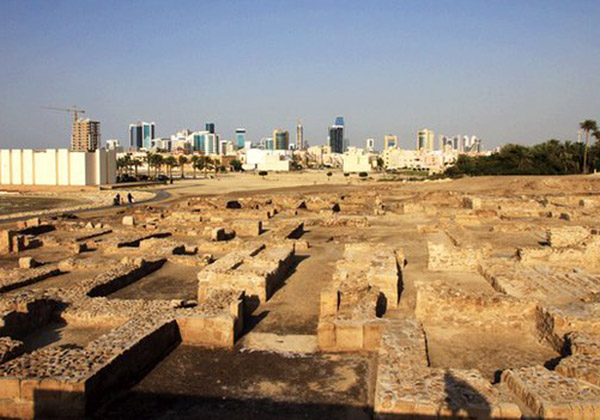 Excavations at an archaeological site in Bahrain are shedding light on one of the oldest trading civilisations, according to archaeologists who presented their work at a conference in the country’s capital, Manama.

Despite its antiquity, comparatively little is known about the advanced culture traces of which have been found in the site of Saar, Bahrain. The site, thought to be the location of the enigmatic Dilmun civilisation, was recently discussed in the conference devoted to wide-ranging debate on heritage tourism and organised by UNESCO.

Dilmun , which flourished during the third millennium BC, was a hub on a major trading route between Mesopotamia and the Indus Valley in South Asia. It is also believed that Dilmun had commercial ties with ancient sites at Elam in Oman, Alba in Syria and Haittan in Turkey. Merchants from Dilmun are thought to have had a monopoly of trade in copper, a precious commodity which was shipped from the mines of Oman to the cities of Mesopotamia.The abundance of sweet water flowing from springs which still supply the island with much of its drinking water was one of the cornerstones of Dilmun. The island was an oasis of fertility in ancient times in a mainly desolate region. This could have given rise to a legend that Bahrain may even have been the biblical Garden of Eden.

What is actually true though is that Bahrain is certainly a Garden of Eden for archaeologists. The island-state boasts a number of settlemen sites and approximately 170,000 burial mounds covering an area of 30 square kilometres or 5% of the main island area.

At Saar (named after the closest modern village), Bahraini archaeologists aim to uncover traces of this important but little-known culture as well as preserving what has already been found. This meticulous maintenance of the archaeological settlement marks a turning point in the way Bahraini specialists are dealing with the vast store of historical remains on the island.

According to Salman al-Mahari, the Bahraini archaeologist in charge, the Saar settlement divides into two: a residential zone and, at a small distance, the cemetery where the inhabitants buried their dead.”This site has provided a lot of information about daily life […]. This has enabled us to compare finds made here with objects unearthed at other locations on the island. It is evident that this city and graveyard date back to the early Dilmun period.”

More on Dilmun, but also on Bahrain’s Greek past, has been found at Qal’at al Bahrain, as three consecutive Dilmun cities as well as a Greek city dating back to 200 BC have been unearthed under an old fort. According to a BBC report, “The site is impressive: the outer walls enclose an area of several hundred square metres. At its centre lie massive carved stones marking the entrance and walls of a chamber containing an altar once flanked by copper-faced pillars. Next to it is another structure where the presence of blackened animal bones and charred earth suggest a chamber for sacrifices to the gods. On the other side of the central altar, a flight of carved steps leads down to a pool, a deep, stone-walled well built over one of the numerous underground springs where one of three principal Sumerian deities – Enki, the water-dwelling god of wisdom – supposedly lived”.

Much of the information about ancient Bahraini beliefs but also demographics comes, as expected, from the numerous burials unearthed so far.  “The belief system in Dilmun has a lot in common with those of Mesopotamia and ancient Egypt […]. Belief in the after-life is shown by burying the dead with possessions such as tools, food, drinking vessels and gold. We’ve even found weapons.”, says Abdullah Hassan Yehia, the keeper of the Qal’at al Bahrain.

The majority of the burial grounds date back to the second and third centuries BC but some are as recent as 2,000 years old. The oldest and largest burial mounds, referred to as the “Royal Tombs”, are found at Aali and measure up to 15m in height and 45m in diameter. Archaeologist Salman Al-Mahari agrees: “There were a number of large population centres on the island. We have calculated that there would have been a significant number of deaths of both adults and children who would have been buried here,” he says.

“There has been a lot of academic work carried out over the past decades,” says Khalifa Ahmed al-Khalifa from the Arab Regional Centre for World Heritage. “The idea is to simplify and interpret all this academic information so that local people and international visitors can grasp the importance of our heritage.”

Using Saar as an example, he continues. “It includes houses, restaurants, commercial outlets, a cemetery and a place of worship. These are all part of a modern city. […] One of the characteristics of Saar are its honeycomb-shaped burial complexes. This is the sort of thing that people find fascinating,” he adds. “As long as it is presented in an easily digestible way.”

While academic research continues into life 4,000 years ago in Dilmun, with an emphasis on trade, diet, gods, pottery and other industries as well as local burial customs, there is now a focus on making everything interesting to the layperson. “It’s quite a challenge that we’re facing,” says Khalifa Ahmed al-Khalif. “But with the help of new technology we’ll be able to place Bahrain on the [ancient] global map.”