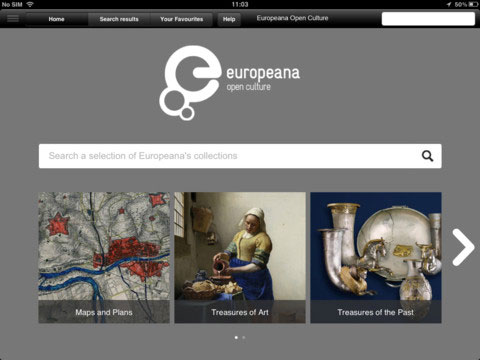 Europeana, Europe’s digital library, museum and archive, has launched its first free iPad app. ‘Europeana Open Culture’ introduces the public to hand-picked and beautiful collections from some of Europe’s top institutions, and allows people to explore, share and comment on them.

Europeana Open Culture presents stunning visual collections from Europeana.eu with large images – great for those smaller details – and a ‘comment’ option that opens up the possibility for dialogue between many people exploring the same images.

As Jill Cousins, Europeana Executive Director says: “We’re really pleased to launch the first ever Europeana app. By downloading Europeana Open Culture, more people can now explore, share and have fun with Europe’s cultural heritage. It’s only a small snapshot of the whole of Europeana’s collections but small is beautiful. We’re enthusiastic and excited about the ‘Connect’ feature which you can use to link images to articles elsewhere on the web, or to content in Wikipedia. And for the first time, you can make your own comments on the individual images.”

Once having downloaded the free app, one can start exploring by entering a keyword in the search field or by selecting one of the five themes. Tap a thumbnail to view the image in full resolution, read other users’ comments, post one’s own impressions and connect the image to other relevant pages on the web (for instance, Wikipedia). One can also add the image to his/her favourites and create his/her own personal museum.

The 350,000 images available through the app come from collections as diverse as: Royal Botanic Gardens, Edinburgh, UK; Rijksmuseum, The Netherlands; National Library of Poland; The Archaeological Museum, Portugal; Bulgarian Academy of Sciences; Digital Library of the Spanish Ministry of Defence.

All images included are either in the public domain or are openly licensed which means they can be used for any purpose, for example in a school project or a thesis, in a presentation to your local history society, on blogs, Wikipedia, or even commercially. What’s more, Glimworm IT have released the open source code behind the app, meaning that developers can get hold of it, use it and experiment with it.

For more information on how the app works, go to http://muse-opensource.org/. Those interested in the code can check the GitHub repository and provide their feedback to [email protected]