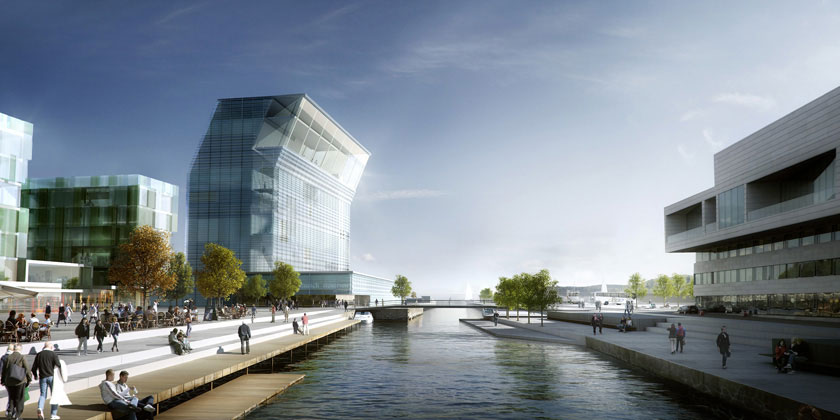 After years of dispute, an agreement has been reached

In 2009, the Spanish architectural firm Herreros Arquitectos won the international competition to design the new building complex of the Munch Museum and the Stenersen Museum Collections. The Spanish architects envisaged a futuristic crooked glass structure on Oslo’s waterfront (next to the Opera House) to “safeguard and disseminate a basic heritage of the history and character of Norwegian culture”, as they stated. The project was dubbed “Lambda”.

Although the new museum was planned to be completed in 2013, before the local election in Oslo in 2011 Oslo Progress Party decided that they would no longer support building Lambda due to economic concerns. After the election, in December 2011, Oslo City Council voted to end the Lambda project. Instead the council wanted to consider improving the current museum or moving the collection to Nasjonalgalleriet.

Another point of dispute between city officials was the location of the new museum, as some argued that new building should be built on the museum’s current site in Tøyen district, a residential area of Oslo.

As for the current Munch Museum, the 50-year-old building that houses thousands of the land’s most influential artist looks more like a postwar municipal building than an art gallery. Much of Munch’s works remains in the basement of the museum, as the building lacks enough spaces, appropriate lighting and sophisticated climate control.

Due to these reasons, in late October 2012, nearly 1,000 people packed the streets of Oslo carrying torches to the music of a marching band demanding that Oslo City Council members find a better home for Munch’s work. At the end of the march, the crowd let out a collective scream.

Now, just a few days before the opening of the exhibition “Munch 150”, on June 2, an agreement has been reached, and the Lambda Project finally got the green light. The decision “shows that even the starkest political opponents can put aside their differences for the [common] good”, said Hallstein Bjercke, the city’s commissioner for culture and industry, at the press opening on Friday for the exhibition.

The 12,000 sq. ft museum, which is expected to cost $273m, is due to open in 2018. “Oslo is the fastest growing city in Europe and the new, modernist Munch Museum is part of that growth. [Because of the new museum] Munch will have a key role in how modern Oslo will look,” Bjercke said.