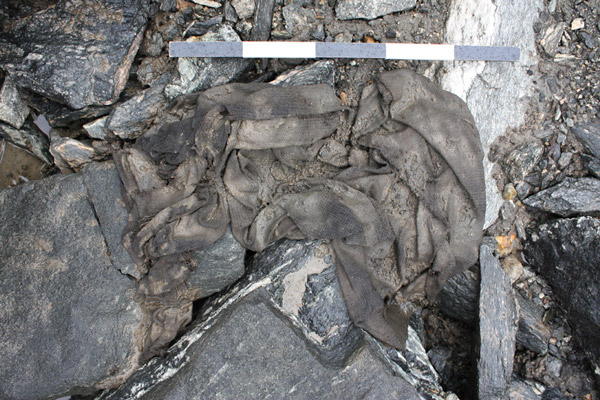 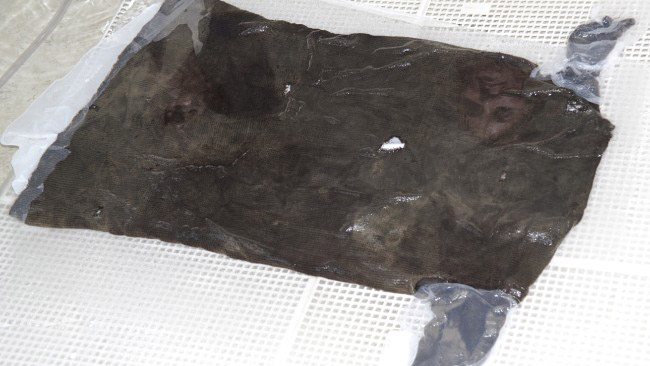 And other stories of frozen antiquities from Norway

A pre-Viking woollen tunic found beside a thawing glacier in south Norway shows how global warming is proving something of a boon for archaeology, scientists said on Thursday.

The greenish-brown, loose-fitting outer clothing – suitable for a person up to about 1.76 m. (5 ft 9 inches) tall – was found 2,000 m. (6,560 ft) above sea level on what may have been a Roman-era trade route in south Norway. The discovery took place in 2011. Since then, scientists study the artifact dating it around 300 AD. Research also showed the well used garment -“repaired several times” according to conservation expert Marianne Vedeler- is made of lamb’s wool with a diamond pattern that had darkened with time. Only a handful of similar tunics have survived so long in Europe.

The archaeologists said the tunic demonstrates that Norway’s Lendbreen glacier, where it was found, had not been so small since 300 AD. When exposed to air, untreated ancient fabrics can disintegrate in weeks because of insect and bacteria attacks.

The experts in Oslo are still puzzled on why anyone would take off a warm garment by a glacier. One possibility was that the owner was suffering from cold in a snowstorm and grew confused with hypothermia, which sometimes makes suffers take off clothing because they wrongly feel hot.

According to Lars Piloe, a Danish archaeologist who works on Norway’s glaciers”It’s worrying that glaciers are melting but it’s exciting for us archaeologists”.

A Viking mitten dating from 800 AD and an ornate walking stick, a Bronze age leather shoe, ancient bows, and arrow heads used to hunt reindeer are also among 1,600 finds in Norway’s southern mountains since thaws accelerated in 2006. One ancient wooden arrow had a tiny shard from a seashell as a sharp tip in an intricate bit of craftsmanship.

The 1991 discovery of Otzi, a 5,300 year old man from the Alps is the best known glacier find. In recent years, other finds have been made from Alaska to the Andes, many because glaciers are receding. The shrinkage is blamed on climate change, stoked by man-made emissions of greenhouse gases from burning fossil fuels.

The warming climate also has an impact elsewhere. Patrick Hunt, a Stanford University expert who is trying to find the forgotten route that Hannibal took over the Alps with elephants in a failed invasion of Italy in 218 BC, said the Alps were unusually clear of snow at 2,500 metres last summer. Receding snows are making searching easier.

“I favour the Clapier-Savine Coche route (over the Alps) after having been on foot over at least 25 passes including all the other major candidates,” he told Reuters by e-mail.