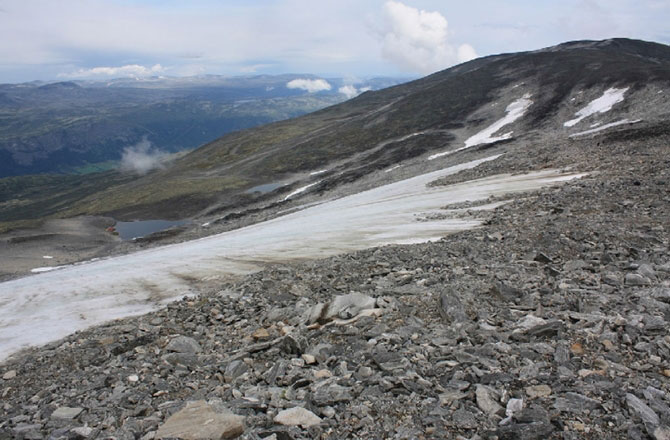 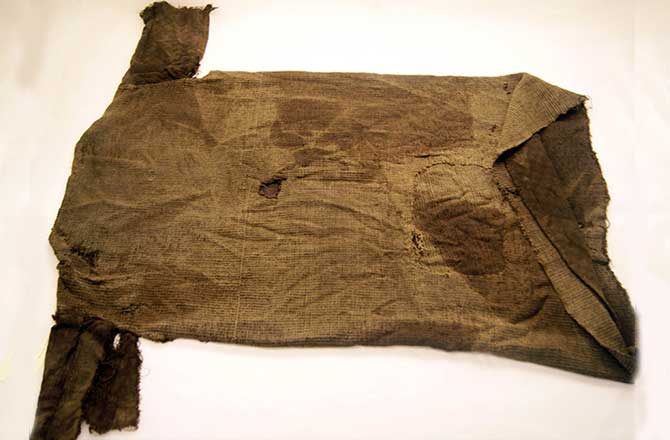 Out of the Norwegian glaciers

Global warming has caused rapid melting of snow patches and glaciers in the mountains of Norway as in other parts of the world, so hundreds of archaeological finds emerge from the ice each year. One of them is a first millennium AD sweater, discovered two years ago in an hunting area on the Norwegian Lendbreen glacier at 6,560 feet above the sea level.

“As the temperature rises each year, the assemblages of prehistoric hunters emerge from the ice. Archaeologists in Norway are now conducting regular surveys in the mountains to record the new finds. A recent example presented here consists of a whole tunic, made of warm wool and woven in diamond twill. The owner, who lived in the late Iron Age (third–fourth centuries AD), was wearing well-worn outdoor clothing, originally of high quality.”

The finding of Marianne Vedeler, from the University of Oslo, Norway, and Lise Bender Jørgensen, from the Norwegian University of Science and Technology in Trondheim has been detailed in the current issue of the journal “Antiquity”.

According to the researchers who have investigated the extremely well preserved Iron Age tunic found two years ago under melting snow in Norway, the sweater, made of warm wool and woven in diamond twill, was a dominating fashion trend among reindeer hunters 1,700 years ago. It was made between 230 and 390 A.D., according to radiocarbon dating.

“It is a very rare item. Complete garments from early first millennium A.D. Europe can be counted on the fingers of one hand,” Jørgensen told Discovery News.

“There is no doubt that the wool was carefully chosen for both fabrics, and that both quality and natural pigmentation were taken into consideration,” the researchers said. Indeed, the fabric was deliberately and evenly mottled, the effect obtained using two light and two dark brown alternating wool threads.

The tunic would have fitted a slender man about 5 feet, 9 inches tall. It featured a boat neck, had no buttons or fastenings, but was simply drawn over the head like a sweater.

A similar garment was excavated more than 150 years ago in a bog at Thorsbjerg, Schleswig-Holsten. Now in the Archaeological Museum in Schleswig, Germany, it was found in an early first millennium weapon deposit offering, and presumably had belonged to an officer.

“The similarity between the two tunics is very interesting as it suggests that a specific style was intended, and that this ‘fashion’ was known over a wide area. Both are woven in a weave called diamond twill that was popular over large parts of northern Europe in the period,” Jørgensen explained.

The sweater-like tunic showed hard wear and tear and had been mended with two patches, which suggests that the hunter looked after his clothing. Although, as Jørgensen pointed out, he may not have been its first owner.

Researchers believe it is quite possible that the tunic was originally sleeveless, and that the sleeves were added at the time of the second repair. “For the first repair the mender used a patch of the same fabric as used in the body section, while the second patch derived from the fabric used for the sleeves. The seams on this second patch are made with the same yarn as used for sewing on the sleeves,” Vedeler and Bender Jørgensen wrote.

But why was the tunic left in the mountains? “The hunter may, perhaps, have been surprised by sudden fog or snow, and not been able to retrieve his garment. This can easily happen in these surroundings,” Bender Jørgensen suggested.

The tunic is not the only textile item recovered from the Norwegian ice patches. “Currently, approximately 50 fragments await dating and analysis and, as global warming progresses, more can be expected. They promise to shed further light on dress, textile design and textile production in the first millennium AD — and earlier,” the researchers said.