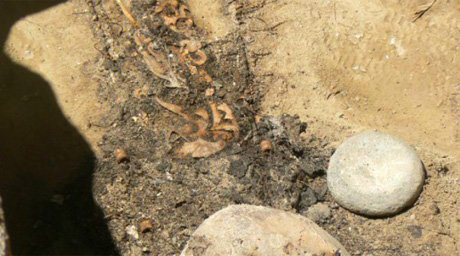 Jewellery, traditional headpiece and traces of clothing among the finds

The burial site of the high-ranking young woman was discovered during reconstruction of Taskesken-Bakty road in Urdzhar region of East-Kazakhstan oblast. An expedition made of professors and students of Semipalatinsk and Pavlodar pedagogical institutes discovered the stone tomb-chest with remains of the young woman at the depth of 1.7 meters under a burial mount.

Objects found in at the burial site certify that the woman was from a distinguished tribe. According to the archaeologists, the golden headpiece that looks like Kazakh Saukele (national headgear of women) is the most valuable item for the research. “The pointed golden head wear with zoomorphic ornaments has the top that looks like the arrows and is decorated with a spiral made of golden wire and jewels. A similar head wear used to be part of the official costume of the Saka tribe chieftains. It is quite possible that the woman was a daughter of a king of Saka Tigrakhauda tribe,” Timur Smagulov said.

According to him, it is quite possible that young Tomiris who later became a warrior-queen used to wear a similar head wear. According to the expedition’s members, ceramic and wooden vessels, as well as bones of a sacrificial sheep were also discovered in the tomb. Pieces of blue and green clothes remained on the woman’s remains. Golden earrings and a stone altar were found next to her head.

“According to the preliminary information, the tomb of the “Urdzhar princess” is dated 4th or 3rd century B.C.,” Smagulov said. According to him, a similar tomb discovered in Issyk burial mount (the “Golden Man”).