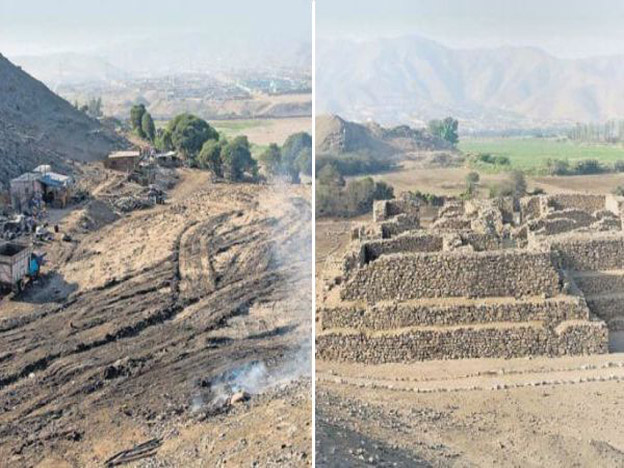 An ancient archaeological structure has been ruined by private construction companies

The pyramid El Paraiso, located near the river Chillon, is one of the oldest structures constructed in the Americas, made up of 12 pyramids and covering over 64 hectares.

According to archaeologist Frederic Engel, the site of El Paraiso could have held between 1500 and 3000 inhabitants and the monuments had required over 100,000 tons of rock to construct, which was taken from the hills surrounding the structure, and was likely used for religious and ritual purposes. Evidence shows the culture living there was from the Late Pre-Ceramic Age (3000-2000 B.C.E).

Despite its obvious importance to Peruvian culture, this pyramid was knocked down and later burned by several clandestine groups that entered the site on Saturday.

Archaeologist Marco Guillén Hugo was in charge of the research and excavation of this site and reported to El Comercio that he had reason to believe two private building companies, Compañía y Promotora Provelanz E.I.R.L and Alisol S.A.C Ambas, were behind the destruction.

“This isn’t the first time they have tried to take over this land,” Guillén told the daily. “They say they are the owners, even though this land is untouchable.”

The Ministry of Culture has said that although the companies claim to own the land, it is actually under state control.

The destruction of this pyramid, archeologists stated, was an irreparable loss for the culture and history of Peru.