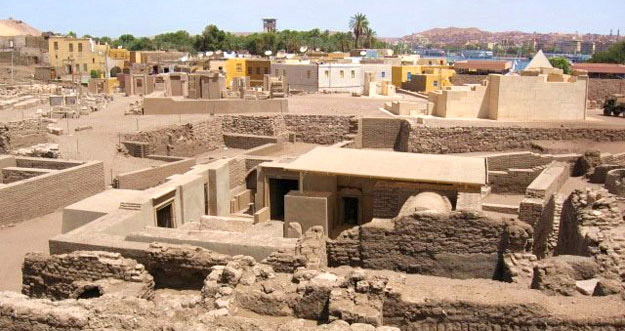 A Jewish Temple in Ancient Egypt?

The quest of a Jewish past in Elephantine

An overview of the archaeological discoveries in Elephantine which revealed the existence of a flourishing Jewish community around the time of the Persian conquest of Egypt is presented in the Jerusalem Post by senior scholar Stephen G. Rosenberg:

“Just a hundred years ago, they were searching for it desperately. German, French and Italian archaeological expeditions were mounted to comb the lower stretches of Elephantine Island in the Nile River, in southern Egypt, but without success. They had been activated by the publication in 1911, two years earlier, of papyrus documents from the area that contained personal stories of members of a Jewish military colony in the area from the 5th century BCE. According to the document, there had been a temple in their midst of the colony. But where, exactly? Was it real or a myth ? Where was the colony, exactly, and why was it there at all? With the advent of World War I in 1914, the search was called off. It resumed after 1918, but again without success.

The papyrus scrolls were specific. The Jewish colonists lived in peace with their Egyptian neighbors, and they kept the Jewish laws. In fact, the Persian Emperor Darius II had commanded them to keep the Passover feast of unleavened bread in 418 BCE and not to drink beer for seven days after Nissan 14, according to one of the papyri. The area at the time was under Persian control; it had been captured by Cambyses in 525 BCE, and the Jewish colony was under Persian jurisdiction.

They occupied a whole row of mud-brick houses, some of them married Egyptian wives, some did not, and altogether they lived their lives in peace and quiet. Why were they there? They were a military unit serving there to guard Egypt’s southern border. They were on Elephantine Island, opposite Aswan on the mainland, and it was here, at the first cataract of the Nile, that Egypt had always had to defend itself against infiltrators from the south, where the poorer nations were desperate to enter and enjoy the riches of their wealthy neighbors.

But why were the Hebrews doing this job? The Persians were also keen to guard the border and they trusted the Jews, who had come to Egypt as refugees and were not allowed to work or to own land as citizens, but could serve as mercenaries, and that is what they did.

There was a whole colony of them, they built their houses and it seems set them around a small temple, at least according to the papyri.

There was no record of this Jewish colony in the history books, nothing in the works of Jewish historian Josephus Flavius, and nothing in the Talmud or any official Jewish records, nothing at all except in the papyri that had been found in 1893. So the world was desperate to see if they were correct. Had there really been a Jewish temple in Egypt in the 5th century BCE? IN 1893 the American adventurer C.E. Wilbour acquired a hoard of documents from the locals on Elephantine Island. He could not read the Aramaic texts, so he stored them in a sealed metal trunk, which passed to his daughter on his death in 1896. She eventually passed them on to the Brooklyn Art Museum in 1947. However, other papyri on the subject had come into the hands of British and German scholars in 1901 and 1903, and were quickly translated and published by the Germans in 1911.

Among other details, the documents described a shrine standing in an open courtyard with an altar on which animal sacrifices were offered. It had stood before the conquest of Egypt (in 525 BCE.) by the Persians and Cambyses had spared it, although destroying other temples.

It remained standing until about 400 BCE, when the Persians were driven out by the Egyptians. (It had been destroyed at one time by the priests of Khnum, who had an adjoining temple, but it was rebuilt again a few years later, on the orders of the Persian governor. The priests of Khnum were powerful because Khnum was the ramheaded god who was presumed to govern the rise and fall of the Nile from this spot, at the first cataract).

This was the story and the European expeditions were desperate to find the temple, but after WWI they lost interest and it was not till 1967 that another expedition was mounted. This was not to search for the temple, but to record all the pagan temples that had been built at this important site in southern Egypt.

They recorded many Egyptian temples of various periods but, after many years, also found what they called “the Aramaic village.” This was a series of mud-brick houses, in ruins, that were lined up along two sides of a central site with a fine plaster surface, and a small building paved in fine tiles.

Luckily, Hebrew University professor Bezalel Porten had published his plan of the Jewish colony houses, based on the papyrus documents, and the German team recognized that what they had found were the Jewish houses around the temple site, all as Porten had predicted from the documents.

The temple itself was small, in fact only half of it remained, but it had a fine tile floor in two layers, indicating that the first had been destroyed and then replaced. It stood in a courtyard of fine plasterwork, while the houses only had crude mud floors. So this was the temple, and the papyri were true.

The final discovery was only made in 1997, but it indicated a small Jewish temple in southern Egypt, built to serve a Jewish colony that acted as garrison to defend the southern approach to the rich country of Egypt.

The Jews had acted as mercenaries to the Persian colonizers, so when the latter were ousted by the Egyptians in about 400 BCE, the Jews were in danger, and might even have been considered traitors. So what happened to them? There is no record in the documents. Hopefully they were not murdered, but more probably they assimilated and lived on with their Egyptian counterparts.

There is however the other possibility: that they escaped.

If they escaped, they could not have gone north, back to their homeland – that would have meant a 1,000-kilometer trek through enemy territory. Rather, they most probably would have gone south and may even have got as far as Ethiopia. Perhaps they settled there and showed themselves to be good Jews, keeping Passover and other mitzvot, and thus converting some of their Ethiopian neighbors to the true religion. Who knows?”