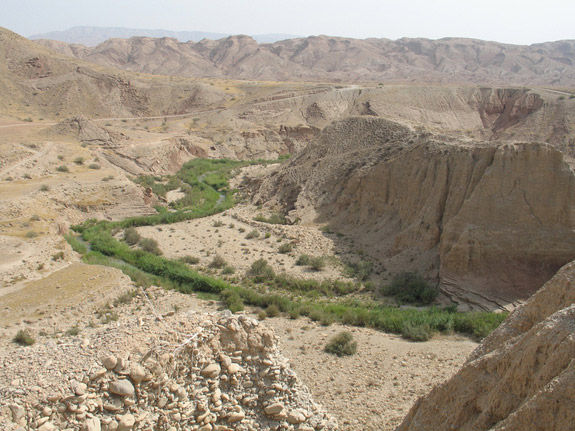 Farming seems to be discovered twice, at the two ends of the Fertile Crescent respectively

The invention of farming some 10,000 years ago set the stage for the rise of civilizations in the Near East. Yet archaeologists disagree about how it happened. Some say it arose in a single spot near the Mediterranean, and spread from there. Others argue it had multiple independent origins, a view that is getting new credence, thanks to findings from an early farming site in Iran.

According to the most commonly accepted view, farming arose in the Fertile Crescent, a broad region stretching from the Mediterranean Sea to Iran. Most research over the past decades has focused on the western stretches of the Fertile Crescent—including modern-day Israel, Palestine, Syria, Jordan and Turkey. Recent excavations in those areas have suggested that hunter-gatherers first began to gather and plant seeds from wild cereals and legumes, such as wheat, barley, and lentils, as early as 13,000 years ago. Over a few thousand years of such cultivation, the wild forms of these plants mutated into new, domesticated species that were easier to manage and harvest, making farming more productive and efficient. Until recently, the oldest known farming villages had been found at sites in Palestine, Syria, and eastern Turkey, where archaeologists radiocarbon dated the earliest domesticated plant species to about 10,500 years ago.

However, this piece of info was largely biased, as the Fertile Crescent’s western stretches were the easiest areas to work in, both logistically and politically, for archaeologists. Only a few sites were known as far east as Iran, and most of them had been excavated in the 1960s and 1970s, before that country’s 1979 Islamic Revolution made it nearly impossible for Western archaeologists to work there—and also before the advent of modern archaeobotanical techniques that make it much easier for researchers to recover tell-tale plant remains.

Still, about five years ago, archaeologists Nicholas Conard and archaeobotanist Simone Riehl of the University of Tübingen in Germany, alongside archaeologist Mohsen Zeidi and his fellow researchers from the Iranian Center for Archaeological Research (ICAR), decided to explore further the site of Chogha Golan, in the foothills of the Zagros Mountain, which had started being excavated about 15 years earlier. While digging in 2009 and 2010, the team uncovered extensive evidence for the processing of plants in the village, including mortars, pestles, and grinding stones. The dig also yielded a huge quantity—more than 21,000 individual pieces—of charred plant remains.

Radiocarbon dating of the archaeological deposits, some 8 meters in depth, showed that Chogha Golan had been occupied continuously between about 12,000 and 9,700 years ago or even later . Then, Riehl and her colleagues traced the use of plants over that entire period of time. According to their research, the people of Chogha Golan apparently began cultivating wild barley, wheat, and lentils more than 11,500 years ago, and that domesticated forms of wheat appeared about 9,800 years ago, nearly as early as at sites to the west. The team concludes that the advent of farming at Chogha Golan, and in the eastern Fertile Crescent, was an independent event that paralleled developments much farther west. This suggests, researchers say, that farming was more or less inevitable once the Ice Age had ended and climatic and environmental conditions were right for it, rather than being a fluke that arose in just one location.

These results have been welcomed by prominent members of the archaeological community, among them Roger Matthews, from the University of Reading, who pointed that the findings are consistent with recent DNA studies that also suggest multiple origins for both domesticated plants and animals. He also added that the finds are consistent with the results of his work at another Iranian site, Sheikh -e-Abad, where wild goats were herded and penned, “a transitional stage between wild and domesticated that matches well with the transitional stages in plant use” found at Chogha Golan. Another scholar, archaeobotanist George Willcox, also agrees on the view of agriculture’s independent development in Zagros, although he states that”it is too early to argue one way or the other”. Still, the fact that the domesticated wheat of Chogha Golan is several hunderd years younger than the earliest known domesticated species, might indicate it was introduced from further west.