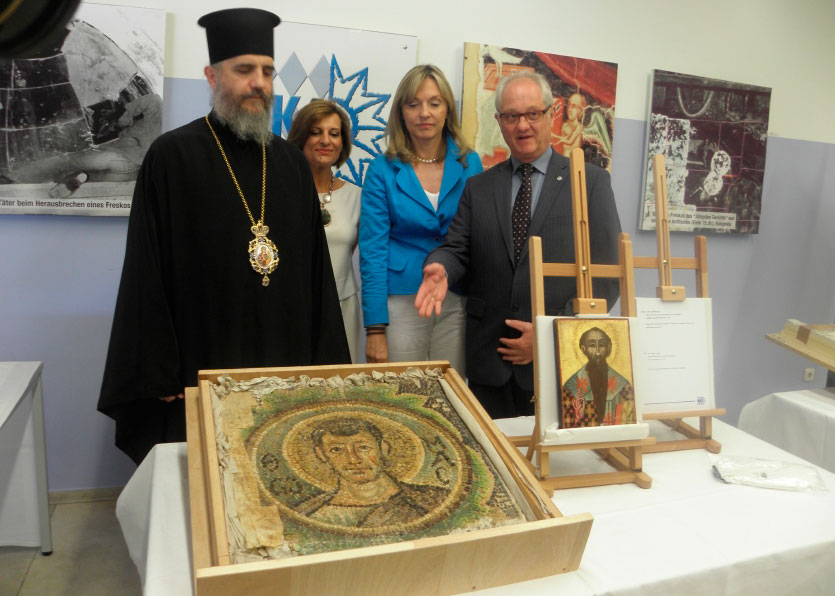 According to an announcement from Walk of Truth, “some of the world’s finest religious art, recovered through a unique police sting operation in 1997, were finally restored to the people of Cyprus by the German authorities.

“The objects are part of a cache of thousands of mosaics, icons and other cultural objects which were found in the possession of Aydin Dikmen, a Turkish-born art dealer, during and after a police raid on his Munich apartment on October 10, 1997.

“Most of these objects had been looted from churches in the Turkish-occupied north of Cyprus in the wake of the island’s invasion in 1974. Their discovery followed a sting operation carried out by 70 officers of the Bavarian police and Walk of Truth’s founder, Mrs Tasoula Hadjitofi, who was acting for the Church of Cyprus. The operation also involved Michel van Rijn, a Dutch art dealer who acted as an intermediary.

“The objects which they recovered had been stolen from many Cypriot sites. They included a mosaic hacked from the walls of the sixth-century Kanakaria church, one of the oldest surviving places of Christian worship, and frescoes from the medieval Antiphonitis church which depict the ancestry of Jesus Christ. The art works have remained in the custody of the Bavarian police for the last 16 years, pending the outcome of legal battles over their fate. In March, a German court finally ruled that more than 170 of the looted objects definitely belonged to the churches of Cyprus, clearing the way for their restitution.

“On behalf of Walk of Truth, Mrs Tasoula Hadjitofi made the following statement:

“‘This is a promising moment for all the people of Cyprus who care about the unique cultural heritage of their island. It vindicates the vision of the late Archbishop Chrysostom I of Cyprus who authorised me to co-ordinate an extraordinary police operation which was highly risky for all of us. The late Archbishop hoped that the stolen objects would eventually be restored to the ancient churches from which they were looted. For as long as that remained impossible, he felt that the best option was to build a church to house the objects in the “dead zone” marking the island’s de facto line of partition. That would provide an opportunity for worshippers to venerate these objects and pray for an eventual end to the division of Cyprus. The archbishop’s wishes should be considered carefully.'”

* Walk of Truth is an NGO based in the Netherlands which works to protect cultural heritage from war, anarchy and crime.