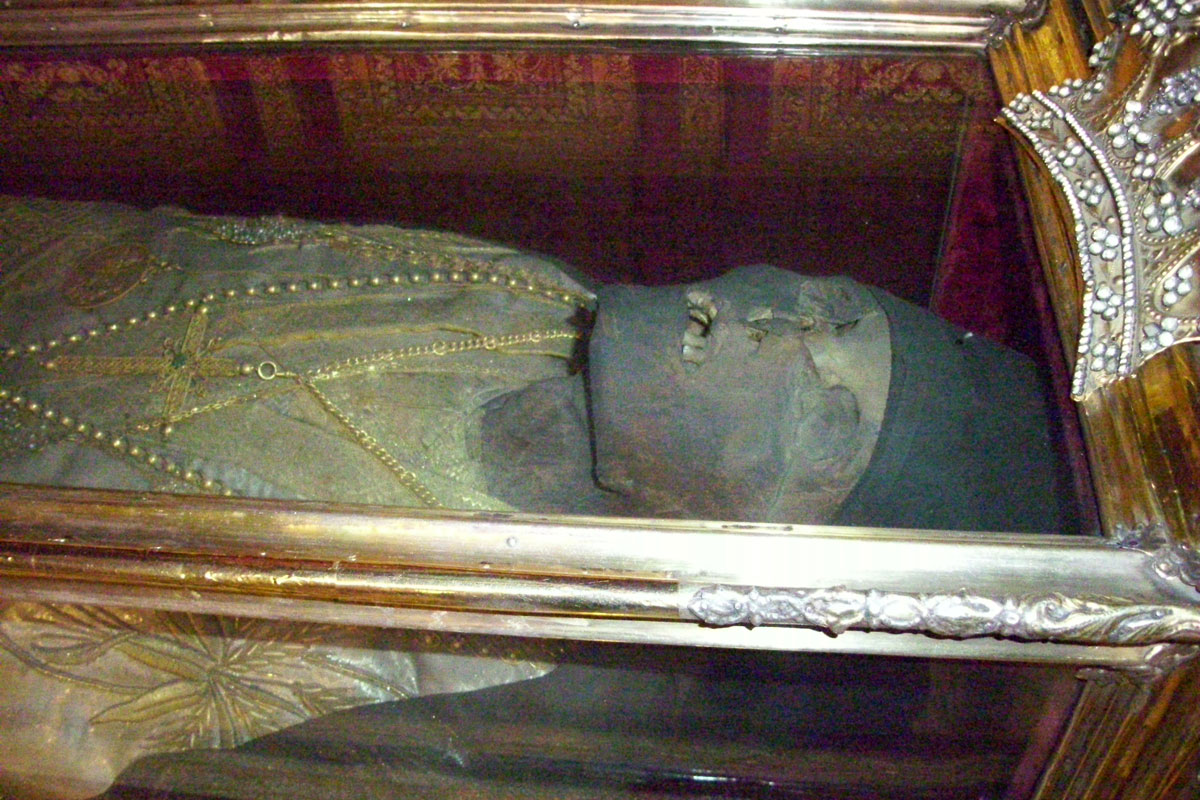 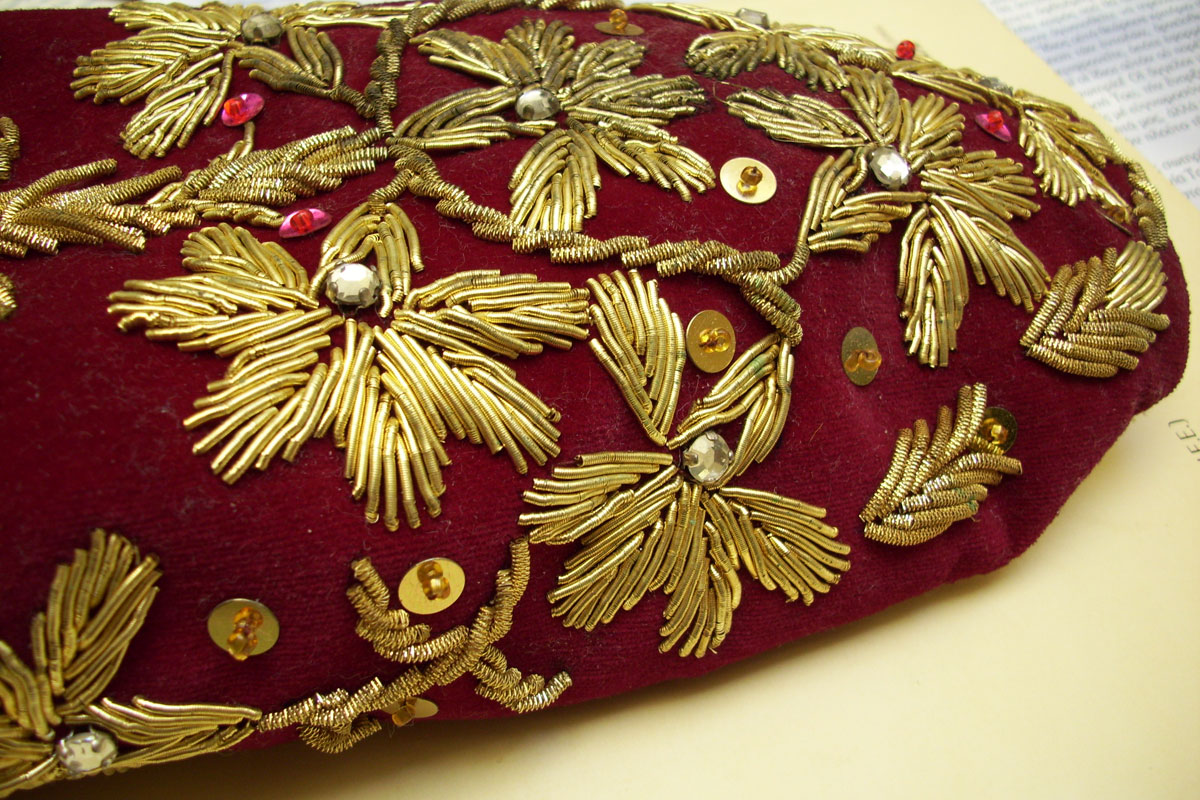 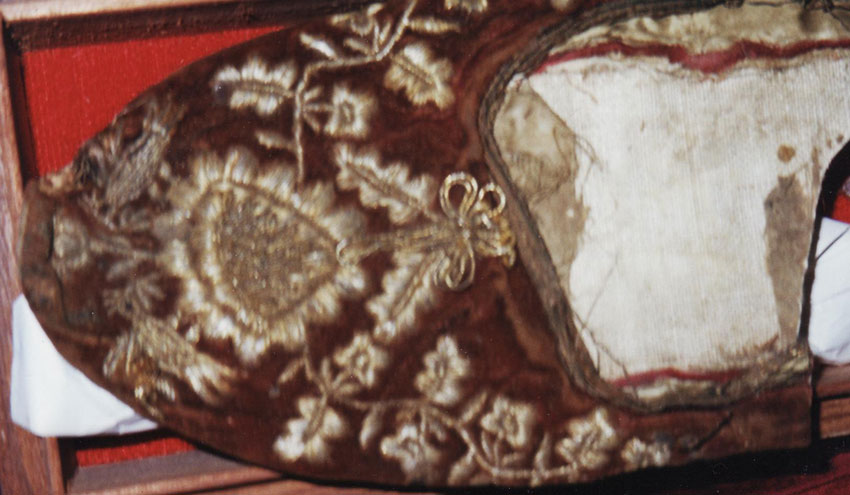 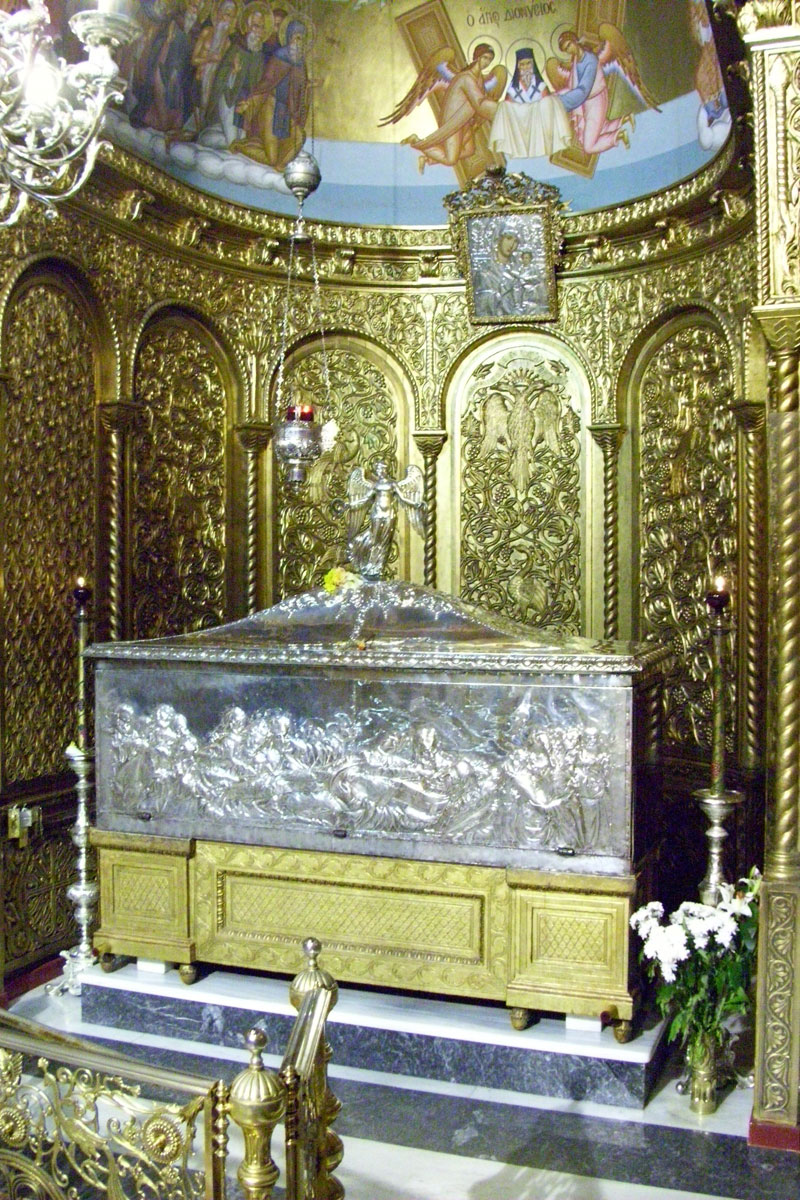 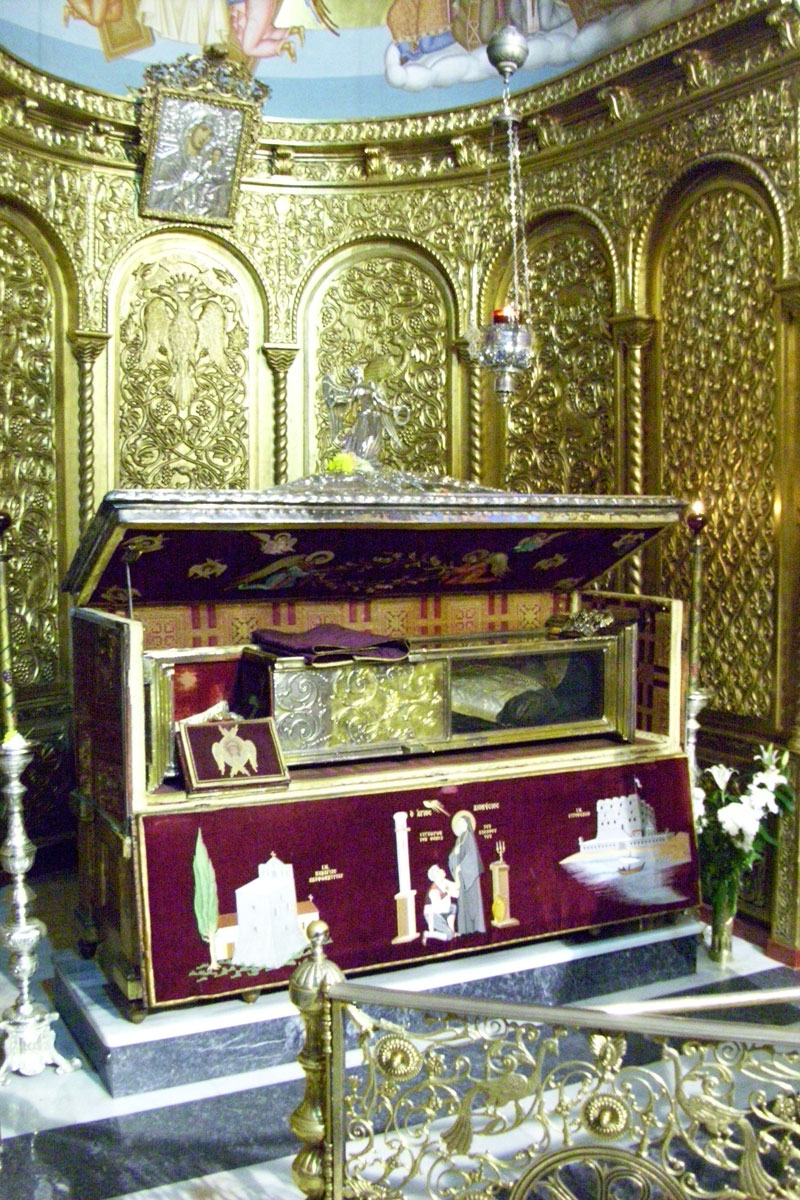 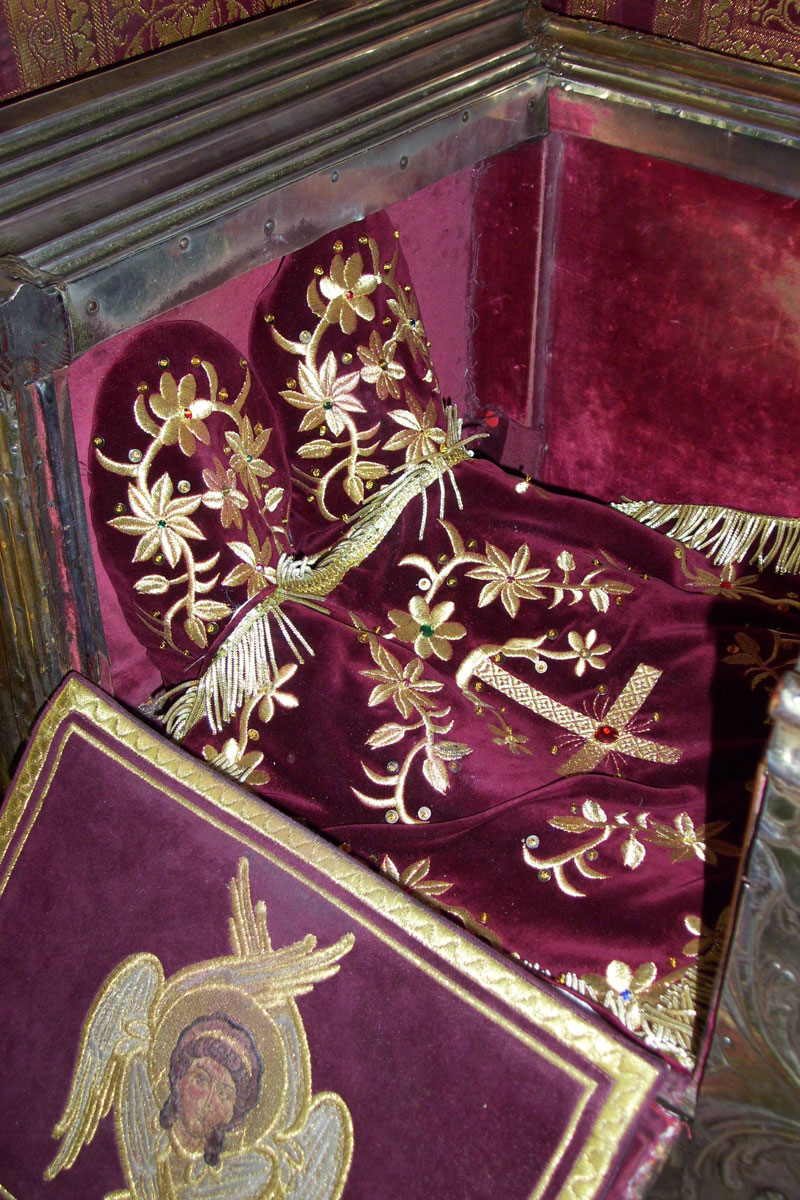 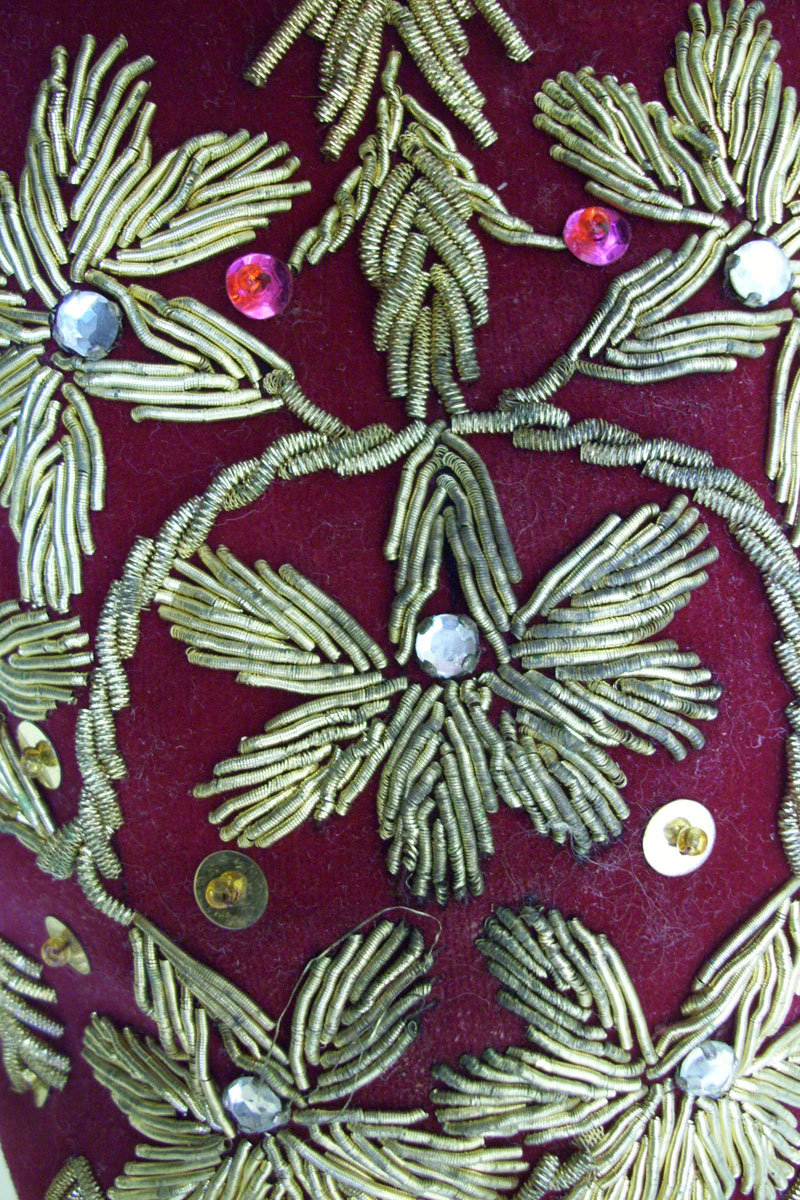 The Sacred Slippers (emvades) of St. Dionysius of Zakynthos

Footwear can be considered as one of man’s basic needs and as an element of clothing. In reality, however, for those involved in this specific field it can be seen as an artform as well as a technique and often as a fine art form that demands that its creators possess both imagination and an ability in composition.

This particular article will be referring to the history, the crafting and the tradition of the sacred slippers (emvades) of St Dionysius of Zakynthos. This type of footware belongs to the special category of sacred orthodox clothing linked to holy relics. Both the morphological and aesthetic elements found while studying the cloth slippers of St Dionysius of Zakynthos, enhance this art form and reveal that, as of the 18th century, there are similarities to the slippers of other Saints from the Ionian islands.

Archbishop Dionysius, whose secular surname was Sigouros, passed away on December 17th 1622, as proved by an official document of that period. At first his remains were buried in the church of St George of Strophades. Several years later, in accordance with monastery regulations, upon opening the grave for the bones to be transported elsewhere, the remains were found to be intact. To begin with, the monks placed the holy remains in the narthex of the Church of the Saviour’s Metamorphosis. During the 5th Turkish Venetian war for the conquest of Crete (1645-1669), the remains were transferred for safety reasons to the church of the Kaleteros Virgin on the monastery estate (metochi) of Strophades. After the war, the monks once again moved the relic back to the Strophades Monastery.

At the turn of the 18th century, the monks of Strophades resorted to appropriate actions for Father Dionysius to be declared a saint. Gabriel, Patriarch of Constantinople with a report from the synod, declared Archbishop Dionysius Sigouros a saint. St Dionysus was proclaimed by the community of Zakynthos as its patron instead of the Skopiotissa Virgin and St John the Baptist. This was at a time after 1758 and before 1763, when the Venetian Senate approved a decision by Francesco Manolesso the Provveditore of Zakynthos (Zante) to recognize December 17th of each year as an official holiday (note 1). Today, liturgical and decorative fabrics as well as intricately designed slippers are used to dress those saints’ bodies which, till now, have remained intact (fig. 1) along with Saint Spyridon and Saint Gerasimos, the two other Saints of the Ionian Islands and more from the Eastern Orthodox Church.

Orthodox ecclesiastical fabrics are divided into three large categories: liturgical garments, liturgical fabrics and relic textiles. There are subcategories corresponding to these categories depending on the use of textiles in the context of worship. Liturgical textiles (e.g. the antimension, the epitaphios et al), include the subcategory of decorative fabrics such as the podees et al. Liturgical garments such as epitrachelia, sakkoi et al have no subcategories. The relic textiles category to which the Saint’s slippers belong, includes all the garments and fabrics that either clothe a holy relic or cover different parts of his body as in the case of a two-dimensional cloth (Karydis 2010).

The custom of honouring relics has already been observed in the Old Testament but, as mentioned by St John Damascenus, it also spread together with the honouring of Saints’ garments, as Mavroska mentions (2006), much more easily than the worshipping of the Cross and the icons. In the West, the combined veneration of relics and of garments was very wide spread, as the relic was considered to be the real “material” body of the Saint while the icon was seen to have been created by the human hand.

For the Eastern Church, the worship of holy relics and of related objects points to the recognition and honouring of the Saint’s martyrdom and at the same time is a reaffirmation of a believer’s faith. The Saint who becomes a martyr to his faith, becomes a vessel of God and is blessed. Originally, as Osborne mentions in 1985, the honouring of relics was combined with the “martyrdoms” conducted by the early Christians in the catacombs. The honouring of holy relics is a supplement of Orthodox theology related to the worship of portable icons, making them an integral part of Church liturgy.

The slippers’ maximum measurements are 25×12 cm. They are made of red cut velvet with floral motifs embroidered with gold and metal threads and decorated with sequins and tir-tir. Sometimes the slippers are made with curved and straight tir-tir (fig. 2). The slippers are lined with white silk and their soles are crafted of cloth covered cardboard instead of leather or other materials so as to fit the relic’s feet properly. Traditionally the slippers are either made by the nuns of the Convent of the Most Holy Virgin “Eleutherotria” in Zakynthos or else in Athens, in shops with clerical supplies. According to oral tradition, older types of slippers (fig. 3) had wooden soles rather than ones made of fabric.

The slippers on the Saint’s relic are usually changed twice a year during the two great feast days. The first takes place on the 24th August commemorating the transportation of the holy Relic from the Strophades islands to Zakynthos ,while the second happens on the 17th December to commemorate the “falling asleep” of the Holy Father in 1622. Both series of liturgies last three days (August 23-26 and December 16-19). Over the previous years the slippers were also changed during Holy Week.

The Saint’s relic is removed from its silver coffin to the right of the Altar (fig. 4-5) and is placed vertically in front of his room, twelve times throughout the year, a tradition followed in the case of the relics of St. Spyridon and St. Gerasimos , the other two Saints of the Ionian islands. The feast days are the following: three days on December 17th, one day on December 25th, one day on the Epiphany, four days between Good Friday and Easter Monday and three days between the 23rd and the 26th August.

Many visitors and pilgrims honouring the Saint take a pair of slippers as a votive offering and a small decorative fabric (podea), made of the same material, to cover the Saint’s feet that are kissed by the believers (fig. 6).The pilgrims then hand over their offerings to the abbot, who places them near the relic in order of priority, as there are many believers for this specific offering. When the right amount of time has passed for the slippers to be removed, the abbot seals one of them and puts his signature on the sole to authenticate it then returning it to the donors. The slipper then placed in a gilded wooden box. The podea and the remaining slipper are cut into small pieces and given to the faithful as a blessing.

During this study, it was noticed that, after more than four years, the metallic threads used to decorate the slippers were slightly oxidised. This was due to the materials used, the handling and possible volatile organic compounds released inside the wooden box (fig. 7).

NOTES
1. See more: Konomos 1996 and on the webpage of the Holy Metropolis of Zakynthos and Strophades.