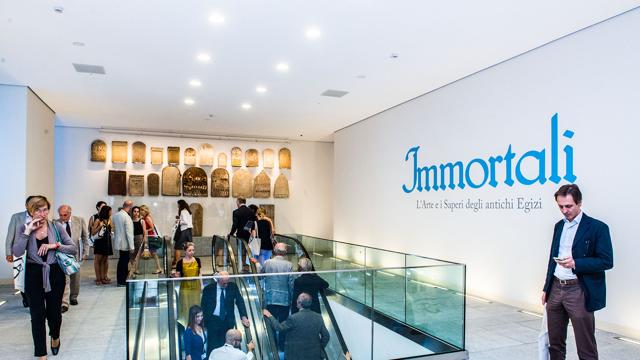 The Hypogeum opens to the public

The new underground set of chambers of the Egyptian Museum in Turin, known as the Hypogeum, has opened its doors to the public. On the occasion of hosting “Immortals”, a temporary exhibition dedicated to the Egyptian afterlife, the museum -boasting to house the second in importance Egyptian collection in the world- has revealed an updated museological image to the public, only paralleled with the Grand Egyptian Museum in Giza, Egypt (scheduled to open at the beginning of 2015) .

The new basement in the seventeenth-century building (a baroque masterpiece) that houses the Egyptian Museum since 1824, offers a fascinating selection of objects: sarcophagi, statues and papyrus exposed along the new temporary exhibition that will allow visitors – 500,000 annually – to continue to enjoy the museum during the renovation of its headquarters.

As already happened in the last 5 years of work, the Egyptian Museum of Turin will remain active until the opening of the new facility as a whole, in March 2015. By this time the display cases exposed in the new Hypogeum – transferred from the first floor, where work continues – leave room for the reception of the public services, the ticket corner and the lecture rooms.

Restoration cost is estimated to 50 million Euros and it is covered by institutions and banks (Compagnia di San Paolo and Fondazione CRT).