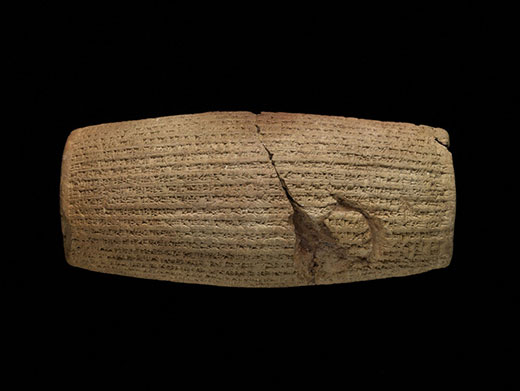 An ancient decree for a multi-cultural society

The Cyrus Cylinder is one of the most celebrated discoveries from the ancient world, with a legacy that resounds to this day. Inscribed on the orders of the Persian king Cyrus II (ruled 559–530 B.C.), the cylinder recounts how he conquered the city of Babylon in 539 B.C. and instituted reforms throughout the region, restoring sanctuaries that had become dilapidated and permitting exiled peoples to return home.

On loan from the British Museum, The Cyrus Cylinder and Ancient Persia: A New Beginning will conclude its highly successful U.S. tour at the Getty Villa beginning October 2 and continuing through December 2, 2013. The tour began in the nation’s capital at the Smithsonian’s Arthur M. Sackler Gallery and traveled to the Museum of Fine Arts in Houston, The Metropolitan Museum of Art in New York and the Asian Art Museum in San Francisco, before its final showing in Los Angeles.

The Los Angeles installation is supported by Farhang Foundation, the exhibition’s local sponsor and community partner. The national tour of the exhibition was curated and organized by the British Museum in partnership with the Iran Heritage Foundation and the Arthur M. Sackler Gallery, Smithsonian Institution.

In addition to the cylinder, the exhibition includes a number of related objects that highlight the artistic, cultural, and historical achievements of the Achaemenid Empire of Iran. These include architectural fragments, finely carved seals, and gold jewelry, vessels, and other luxury objects from the Oxus Treasure.

Often referred to as the “first bill of human rights,” the clay cylinder provides critical contemporary background to Cyrus’s reputation as a benevolent ruler in ancient Greek and biblical texts, and bears witness to the multi-ethnic nature of the expanding Achaemenid Empire, which introduced innovative forms of writing, religion, and luxury goods to the Near East.

According to Timothy Potts, Director of the J. Paul Getty Museum: “The Cyrus Cylinder is one of the most important works to have survived from the ancient world and it is a great privilege to have it on view this fall at the Getty Villa. More than any other object from the ancient world, this declaration by King Cyrus of the return of displaced peoples in and around Babylonia to their settlements has a continuing relevance to the peoples of the Middle East and indeed throughout the world. As home to the largest community of Iranian Americans in the United States, I have no doubt that Los Angeles will embrace this once-in-a-lifetime opportunity.”

Adds Neil MacGregor, Director of the British Museum: “You could almost say that the Cyrus Cylinder is ‘A History of the Middle East’ in one object and is a link to a past which we all share and to a key moment in history that has shaped the world around us. Objects are uniquely able to speak across time and space and this one must be shared as widely as possible. I am delighted that it has this unique opportunity to travel to the Getty Villa in Los Angeles as part of the national tour.”

Written in Babylonian cuneiform, the Cyrus Cylinder inscription begins by asserting that Nabonidus, king of Babylon (ruled 555–539 B.C.), had dishonored the city’s patron god Marduk and oppressed the population. On taking control of the region, Cyrus returned statues of deities that had been removed from their proper shrines, and allowed peoples who had been exiled in Babylonia and western Iran to go back to their settlements. Buried in the foundations of Babylon’s city wall during its rebuilding under Cyrus, the inscribed cylinder was unknown for many centuries until its discovery in 1879.

Upon its arrival at the British Museum, the cylinder’s importance was immediately recognized, as Cyrus the Great was already well known through the texts of ancient Greek historians. Herodotus (485–424 B.C.), for example, wrote extensively of his deeds; and Xenophon (about 430–350 B.C.) presented him as an ideal ruler in his Cyropaedia, a fictionalized biography that did much to perpetuate the Persian king’s legacy. This work is said to have been required reading for the Founding Fathers of the U.S., and Thomas Jefferson owned two copies.

Old Testament sources likewise describe Cyrus in glowing terms. The book of Isaiah refers to him as the “shepherd” of God and as the Lord’s “anointed” for allowing the Jews exiled by the Babylonians in 597 and 587/6 B.C. to return to Jerusalem. The book of Ezra and 2 Chronicles further recount how Cyrus restored the treasures that had been looted during the destruction of the Jewish temple, and decreed that all Jews should help rebuild the sanctuary. Although the Cyrus Cylinder does not mention the Jews by name, their return from exile is clearly related to the policies it records.

In 1971, the Cyrus Cylinder was the official symbol for the 2,500th anniversary of the founding of the Achaemenid Empire in Iran, where it was reproduced widely on coins, stamps, and medals. In October of the same year, the Iranian royal family presented a replica to the United Nations Headquarters in New York, where it remains on display. The Cyrus Cylinder continues to be celebrated as a national emblem today, as evidenced by its appearance on stamps issued by the Islamic Republic of Iran and by the popularity of its recent exhibition in Tehran (September 2010–April 2011), where it was seen by about half a million people.

As a unique accompaniment to the Getty’s installation of this exhibition, a recent acquisition by the Getty Research Institute will be presented for the first time. Luigi Pesce’s Album fotografico della Persia (1860) contains the earliest photographs of the ruins of the Achaemenid palaces and audience halls at Persepolis, together with views of contemporary Tehran—including a number of structures that no longer survive. The album is of special relevance to the display of the Cyrus Cylinder, since Pesce dedicated the album to Sir Henry Creswicke Rawlinson, one of the key figures in the decipherment of Babylonian cuneiform and the first to publish the text of the Cyrus Cylinder.

The national tour of the exhibition was curated and organized by the British Museum in partnership with the Iran Heritage Foundation and the Arthur M. Sackler Gallery, Smithsonian Institution, in collaboration with the J. Paul Getty Museum. The Los Angeles presentation was made possible by the generous support of Farhang Foundation, the Getty’s sponsor and community partner. The tour is supported by an indemnity from the Federal Council on the Arts and the Humanities. The exhibition at the Getty Villa is curated by Timothy Potts, Director of the J. Paul Getty Museum, and David Saunders, Assistant Curator of Antiquities at the J. Paul Getty Museum.