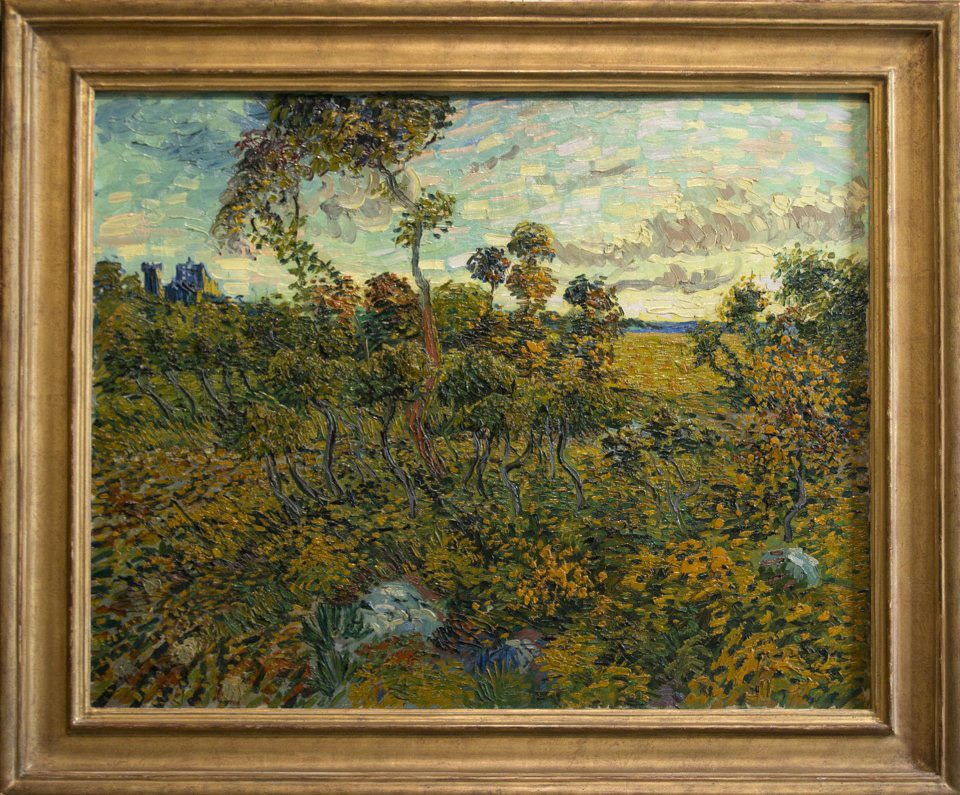 ”But what makes this even more exceptional is that this is a transition work in his oeuvre, and moreover, a large painting from a period that is considered by many to be the culmination of his artistic achievement, his period in Arles in the south of France. During this time he also painted world-famous works, such as Sunflowers, The yellow house and The bedroom. The attribution to Van Gogh is based on extensive research into style, technique, paint, canvas, the depiction, Van Gogh’s letters and the provenance.” Sunset at Montmajour will be shown in the exhibition Van Gogh at work in the Van Gogh Museum in Amsterdam from 24 September.

“All research indicates: this work is by Van Gogh”

Extensive research by Louis van Tilborgh and Teio Meedendorp, two senior researchers of the Van Gogh Museum, indicates that this is a work by Van Gogh. “We carried out art historical research into the style, the depiction, use of materials and context, and everything we found indicated that this is a work by Van Gogh. Stylistically and technically speaking, there are a plenty of parallels with other paintings by Van Gogh from the summer of 1888. By means of research into literature and records, we were also capable of tracing the earliest history of the provenance of the painting. It belonged to Theo van Gogh’s collection in 1890 and was sold in 1901.

”The location of the painting has been identified -the landscape not far from Arles near the Montmajour hill, with the ruin of the abbey with the same name- and, moreover, there are two letters from the artist from the summer of 1888 that literally refer to the painting. Van Gogh writes that he had not succeeded, which can be explained, because the painting shows very strong and typical characteristics of Van Gogh, next to weaker and less convincing elements.

”Technical research has shown that the pigments used correspond with those of Van Gogh’s palette from Arles – including the discolorations that are so characteristic of his oeuvre. He also used the same type of canvas and underpainting for at least one other work, The rocks from the Museum of Fine Arts in Houston, which he painted during the same period and which is highly comparable in terms of style.

”The relatively large painting (93.3 x 73.3 cm) has been technically researched by our restorer Oda van Maanen, in cooperation with the Cultural Heritage Agency of the Netherlands (Rijkdienst voor het Cultureel Erfgoed) (RCE), with X-ray photos and computer analyses of the type of canvas used. The pigments used have also been identified. Microscopic research has been carried out into the various layers of paint. Everything supports the conclusion: this work is by Van Gogh.”

Transition in his oeuvre

Van Gogh had great ambitions with this painting. With this work he wanted to present himself as a poet among the landscape painters and was deeply disappointed when he felt he had not managed to solve certain problems convincingly. It is true that he was often dissatisfied with his achievements, because he even considered world-famous paintings such as Starry night (1889) in the Museum of Modern Art in New York and The sower (1888) in het Kröller-Müller Museum at Otterlo as not all that successful. Van Tilborgh and Meedendorp: “Yet, the tension between dream and reality is what makes this painting all the more attractive. We see Van Gogh visibly working, struggling almost, and this adds to the charm of this work. It belongs to a special group of experimental works that Van Gogh at times esteemed of lesser value than we tend to do nowadays. The painting is even a transitional work. From then on, Van Gogh increasingly felt the need to paint with more and more impasto and more and more layers, and owing to this work, we also get a more balanced insight into to origin of the greatest examples of his drawing – the series of pen and ink drawings that he made the week after he painted Sunset at Montmajour. The painting appears to be inextricably bound up with these pen and ink drawings, they constitute a unity.”

Research results on show in Van Gogh at work

This discovery emphasizes the importance of research that the Van Gogh Museum, as expertise centre, carries out into Van Gogh’s painting method and life. The results of this long-term research of the Van Gogh Museum, in cooperation with RCE and Partner in Science Shell Nederland, into Van Gogh’s method of working are now on show in the anniversary exhibition Van Gogh at work, open daily in Van Gogh Museum in Amsterdam until 12 January 2014. Sunset at Montmajour will be exhibited to the public as part of this exhibition from 24 September.

The entire report of the discovery of Sunset at Montmajour will be published in the October edition of The Burlington Magazine and will also be available in the Van Gogh Museum.

For those interested in learning more about the painting and the examination that led to the attribution, we will offer two lectures on Wednesday 2 and Wednesday 16 October at 14:30 in the museum auditorium. Admission is free for museum visitors. To reserve seats, please e-mail [email protected] Space is limited, so please reserve promptly.