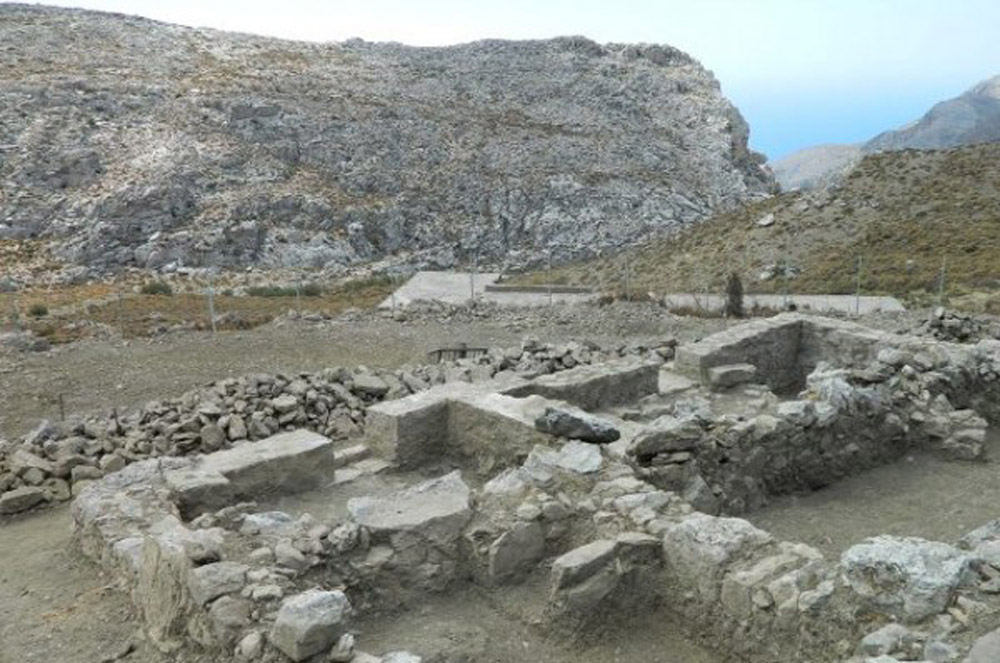 An important center of literature and education of the Byzantine period, which could be considered as the first Greek university, was excavated by Professor Athanasios Paliouras in the location Losoudi of Asterousia, in Herakleion prefecture, at an altitude of 880 meters below the top of Kofinas Mountain.

The monastery, dedicated to the Three Holy Hierarchs, was first located  in 1992 by the journalist-author Nikos Psilakis who included it in his book Monasteries and Hermitages of Crete. Still, it was Prof. Paliouras who conducted detailed archaeological research at the site and who recently presented his finds in the presence of the Metropolitan bishop of Gortys and Arkadia Makarios and of the governor of Crete region Stavros Arnaoutakis.

The monastery was founded in the mid 14th -Century, by the scholar monk Joseph Filagris, who was one of the most important commentators on Aristotle. Filgaris’ important role in Cretan culture of his time has been highlighted by Professor G. Papazoglοu in his doctoral thesis under the supervision of the late Professor Nikos Panagiotakis. As Prof. Paliouras stated at the “Efimerida ton Syntakton” newspaper just prior to his diecoveries’ formal presentation, the monastery was home to an important manuscripts’ workshop where the works of Aristotle were meticulously copied and commented on. “A hundred years before Bessarion and Plethon Gemistos, the works of Filagris were part of the large European libraries […]. While his commented copies could be found in important libraries of Europe, nobody knew the location where the location where such a rich production (of manuscripts) was taking place, and especially in such a critical period”.

Still, the monastery is not considered as a mere manuscripts’ workshop. Prof. Paliouras talks about an organised school, as the copyists-commentators had to be highly educated and well trained in special copying techniques. He also underlined that during that time Aristotelian philosophy was presented throughout Europe. “In a turbulent period, when ideas are under persecution, a Cretan, led by the flame of knowledge, is heading towards a (virtual) ‘eagle’s nest’, inaccessible and remoted, in order to escape from the Venetian conquerors and to establish an organised school of philosophical and theologian manuscripts focusing on the works of Aristotle.”, Paliouras had stated previously for the Greek newspaper.

Stavros Arnaoutakis talked about a great effort, “a very important discovery for the Greek Civilization, the history of Crete, made by professor Paliouras in cooperation with the Holy Metropolis of Gortys and Arkadia.