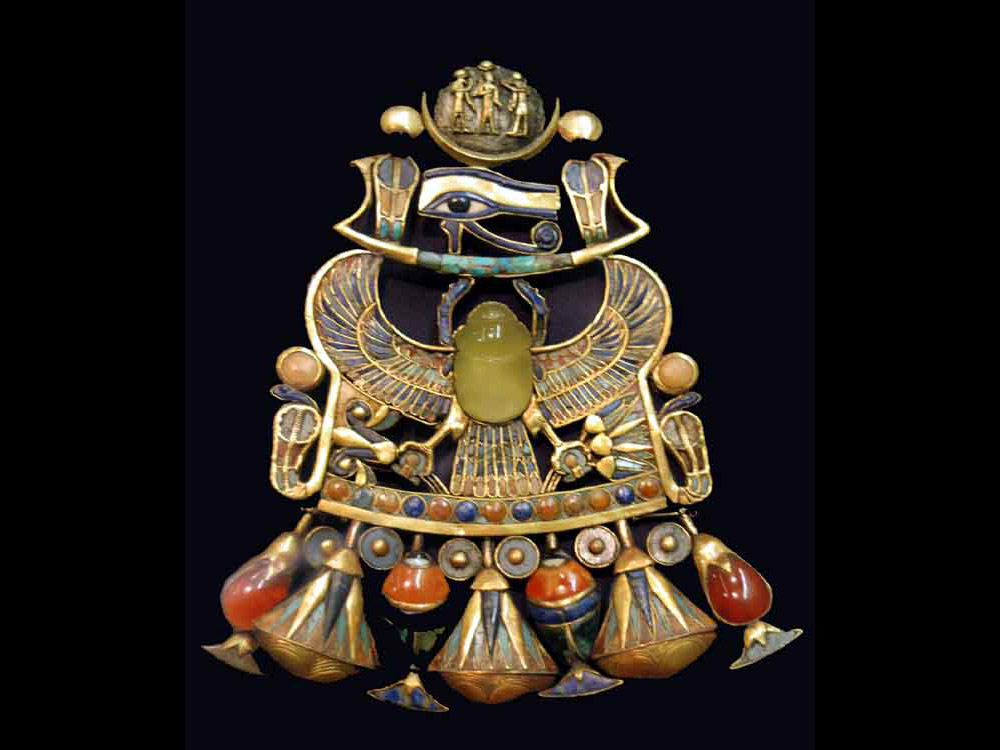 Μοst have heard of the treasures of the 18th Dynasty pharaoh Tutankhamun, first discovered by Howard Carter and Lord Carnarvon in 1922 when they uncovered his tomb in the Valley of the Kings in Egypt. Few are familiar with his impeccably preserved pectoral or brooch, recovered along with the numerous other artifacts within the tomb. Fewer still know about the striking yellow-brown scarab that is set at its center, and that it is made of a yellow silica glass stone procured from the sand of the Sahara and then shaped and polished by ancient craftsmen. Still, little was known about how this silica glass was formed and that the area it was found held a secret from far-far- away.

According to new research, the silica glass was originally formed 28 million years ago, when an ancient comet entered the earth’s atmosphere and exploded over Egypt, heating up the sand beneath it to a temperature of about 2,000 degrees Celsius. The heated sand then became  a huge amount of yellow silica glass, which lies scattered over a 6,000 square kilometer area in the Sahara.

From Tutankhamun to Hypatia

The silica glass was one of a number of clues that eventually led Professor Jan Kramers of the University of Johannesburg, South Africa, and colleagues to a remarkable new discovery. At the center of it all is a mysterious black pebble found years ago by an Egyptian geologist in the area of the silica glass. After conducting highly sophisticated chemical analyses on this pebble, Professor Jan Kramers of the University of Johannesburg and a team of colleagues came to the inescapable conclusion that it represented the very first known hand specimen of a comet nucleus, rather than simply an unusual type of meteorite.

Kramers describes this as a moment of career defining elation. “It’s a typical scientific euphoria when you eliminate all other options and come to the realisation of what it must be,” he said.

“Comets always visit our skies – they’re these dirty snowballs of ice mixed with dust – but never before in history has material from a comet ever been found on Earth,” says Professor David Block of Wits University, a key researcher on the team.

The impact of the explosion also produced microscopic diamonds found within the pebble. “Diamonds are produced from carbon bearing material. Normally they form deep in the earth, where the pressure is high, but you can also generate very high pressure with shock. Part of the comet impacted and the shock of the impact produced the diamonds,” says Kramers.

The team named the diamond-bearing pebble “Hypatia” in honour of the first well known female mathematician, astronomer and philosopher, Hypatia of Alexandria.

Comet material is very elusive. Comet fragments have not been found on Earth before except as microscopic sized dust particles in the upper atmosphere and some carbon-rich dust in the Antarctic ice. Space agencies have spent billions to secure the smallest amounts of pristine comet matter.

The discovery has not only provided the first definitive proof of a comet striking Earth millions of years ago, but it could also help unlock, in the future, the secrets of the formation of our solar system.

The efforts have grown into an international collaborative research programme involving a growing number of scientists drawn from a variety of disciplines. Dr Mario di Martino of Turin’s Astrophysical Observatory has led several expeditions to the desert glass area. This latest research, which will be published in Earth and Planetary Science Letters, was conducted by a collaboration of geoscientists, physicists and astronomers including Block, lead author Professor Jan Kramers of the University of Johannesburg, Dr Marco Andreoli of the South African Nuclear Energy Corporation, and Chris Harris of the University of Cape Town.