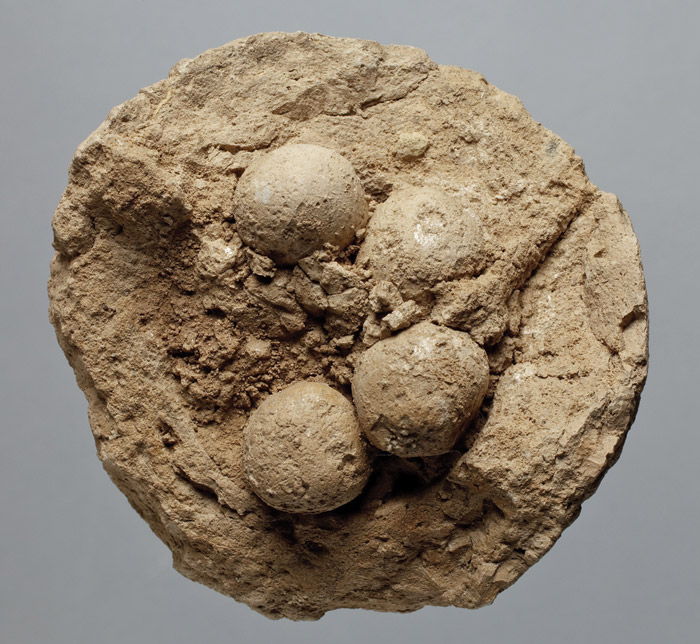 The Orbs of Hidden Truth

Researchers studying clay balls from Mesopotamia have discovered clues to a lost code that was used for record-keeping about 200 years before writing was invented.

The clay balls may represent the world’s “very first data storage system,” at least the first that scientists know of. They were created about 5,500 years ago at a time when early cities were flourishing in Mesopotamia. This is the view of Christopher Woods, a professor at the University of Chicago’s Oriental Institute, who presented his initial finds in a lecture at Toronto’s Royal Ontario Museum (given  in the framework of an exhibition on Mesopotamia that runs to Jan. 5, 2014).

The balls, often called “envelopes” by researchers, were sealed and contain tokens in a variety of geometric shapes — the balls varying from golf ball-size to baseball-size. Only about 150 intact examples survive worldwide today.

Researchers have long believed these clay balls were used to record economic transactions. That interpretation is based on an analysis of a 3,300-year-old clay ball found at a site in Mesopotamia named Nuzi that had 49 pebbles and a cuneiform text containing a contract commanding a shepherd to care for 49 sheep and goats.

How these devices would have worked in prehistoric times, before the invention of writing, is a mystery. Researchers now face the question of how people recorded the number and type of a commodity being exchanged without the help of writing.

The researchers used high-resolution CT scans and 3D modeling to look inside more than 20 examples found at Choga Mish, western Iran, during the late ’60s. To peer inside the balls Woods worked with IT expert Jeffrey Diehm, who arranged for them to be CT scanned on a state-of-the-art industrial scanner (which is better suited for this work than a medical version), and Jim Topich, who had the CT images converted into detailed, dissectible, 3D models.

The CT scans revealed that some of the balls have tiny channels, 1-2 millimeters (less than one-tenth of an inch) across, crisscrossing them. Woods said he’s not certain what they were used for, but speculates the balls contained fine threads that connected together on the outside. These threads could have held labels, perhaps made out of wax, which reflected the tokens within the clay balls.

The tokens within the balls come in 14 different shapes, including spheres, pyramids, ovoids, lenses and cones, the researchers found. Rather than representing whole words, these shapes would have conveyed numbers connected to a variety of metrological systems used in counting different types of commodities, Woods suggested. One ovoid, for instance, might mean a certain unit, say 10, which was used while counting a certain type of commodity.

The researchers, however, were perplexed when their CT scans found one clay ball containing tokens made of a low-density material, likely bitumen, a petroleum substance. “When we make a three-dimensional model of the cavity you get this very strange amoeba like-looking shape,” Woods said during the lecture.

The tokens, in this instance, had air bubbles around them, suggesting they were wrapped in cloth before being put in the ball, the cloth disintegrating over time. In addition, it appears that a liquid, likely liquid bitumen, was poured over the tokens after they were inserted into the balls. What someone was trying to communicate by creating such tokens is unknown.

“That’s a mystery,” Woods told LiveScience in an interview. “I don’t really have a good answer for that,” he said, adding that the bitumen tokens may represent a divergent accounting practice, or, perhaps even, that the transaction recorded involved bitumen.

In ancient Mesopotamia bitumen was used as an adhesive and to waterproof things like baskets, boats and the foundations of buildings, Woods said.

All of the clay balls contain, on the outside, one “equatorial” seal (running through the middle) and quite often two “polar” seals, running above and below.

The equatorial seals tend to be unique and more complex containing what appear to be mythological motifs; for instance a ball from the Louvre Museum shows human figures fighting what appear to be serpents. The polar seals, on the other hand, are repeated more often and tend to have simpler geometric motifs.

Based on this evidence, Woods hypothesizes the seal in the middle represents the “buyer” or recipient; the polar seals would represent the “seller” or distributor and perhaps third parties who would have participated in the transaction or acted as witnesses.

Many people would have acted as the buyers, but only a limited number of sellers or distributors would have been around to transact business with, explaining why the polar seals are repeated more often.

After a transaction of some importance was complete, one of these clay devices was created to serve as a “receipt” of sorts for the seller, as a record of what was expended. “There’s a greater necessity to keep track of things that have been expended than things that are on hand,” Woods said in the lecture.

Deciphering what transaction each clay ball represented is a trickier problem. Woods suspects the tokens represent numbers and metrical units. It’s possible that, through the different token shapes, people in prehistoric times communicated numbers and units in a way similar to how the first scribes did 200 years later when writing was invented. If that’s the case, Woods and other scientists may be able, in time, to crack the code by uncovering how token types cluster and vary.

“If they are, then there is at least some hope of deciphering the envelopes and with it uncovering the earliest evidence for complex numerical literacy,” Woods said.

The amount of detail the scientists gleaned from the CT scans and 3D modeling was extraordinary, Woods said during the lecture. “We can learn more about these artifacts by non-destructive testing than we could by physically opening the envelopes,” he said.

Woods will publish the full research results in the future and plans to put the images and 3D models online.