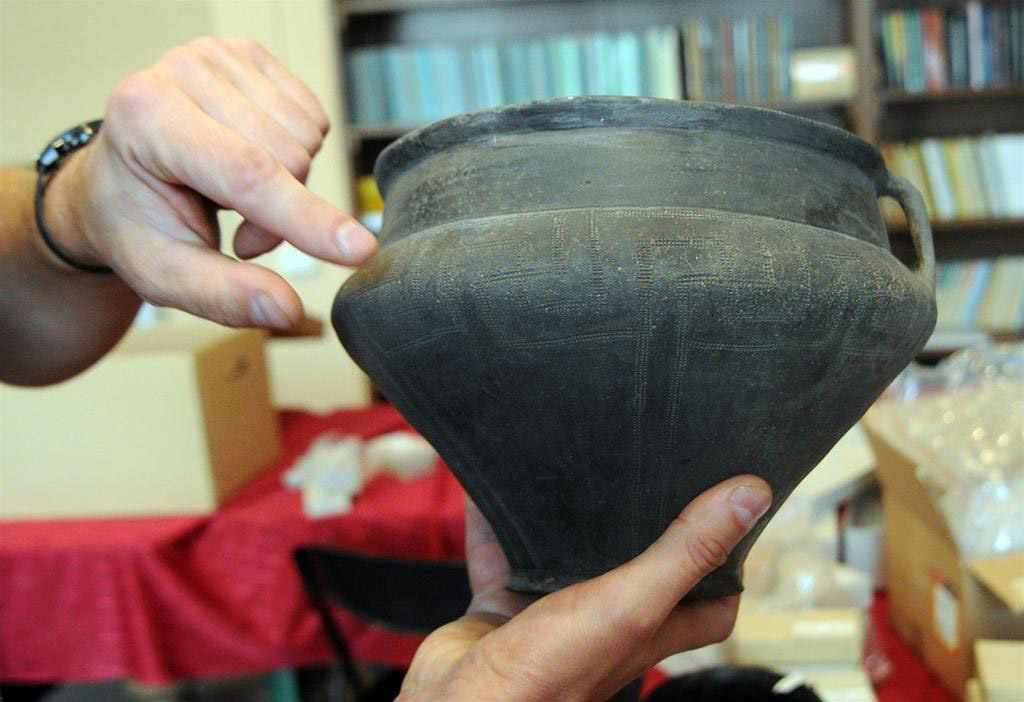 Another warrior’s tomb discovered in Czelin

Dating from the 1st-2nd century AD

A rich warrior grave dating from the turn of the 1st and 2nd century AD is one of the most interesting finds archaeologists discovered during excavations in the Lubusz group cemetery from the Roman period in Czelin (Zachodniopomorskie).

Bartłomiej Rogalski from the National Museum in Szczecin, who led the recently completed study, said that the warrior’s burial is a rare example of a man’s tomb with full armament from the Roman period in the Lower Oder region.

According to Rogalski, the tomb contained a single-edged sword with a set of scabbard clips, a spearhead, shield parts and a pair of ornamental bronze cast clasps for Prussian series garments. “An interesting object from the tomb is a fire striker, which is evidence of the strong Scandinavian influence on the Oder” – said Rogalski. Typically, archaeologists have found warrior tombs with spear and shield in Czelin.

According to Rogalski, the vast majority of sites found in Czelin belonged to the Lubusz group, which from the 1st to the 3rd century AD occupied Lower Oder region, Wkra Land, Pyrzyce Land and Mysliborskie Lakes. Lubusz group is poorly explored archaeologically and its characteristics still await clear definition.

Since 2004, the cemetery has provided a rich collection of weapons from the Roman period. Rogalski said that archaeologist found five swords, including three double-edged swords (one imported Roman gladius), and two single-edged swords, probably made by local blacksmiths. They also found various shield pieces and ornamented spearheads probably derived from the tradition of the Przeworsk culture that occupied then areas of Wielkopolska and Silesia. Also noteworthy are numerous fibulae, brooches used to fasten robes, made of bronze and iron, intricately crafted buckles and belt fittings, and riding accessories, such as spurs associated with the Przeworsk culture or Scandinavian influence, said Rogalski.

This year, 18 objects were discovered during the excavations, including four pit graves and three crematory graves, as well as hearths, pits and paving stones, which – according to archaeologists – should be associated with the operation of the cemetery. The researchers speculate that the latter were connected with various rites and cremation of corpses.

Apart from the objects from the Roman period at the site in Czelin archaeologists also found a skeletal grave and ceramics, which should be associated with the Neolithic Corded Ware culture. This year, they found an elaborately made flint arrowhead dating from the beginning of the second thousand BC.

An open-air museum dedicated to the cemetery is open in Czelin. Visitors can see a reconstruction of a warrior’s grave with equipment and a cremation pyre with a warrior lying on top.