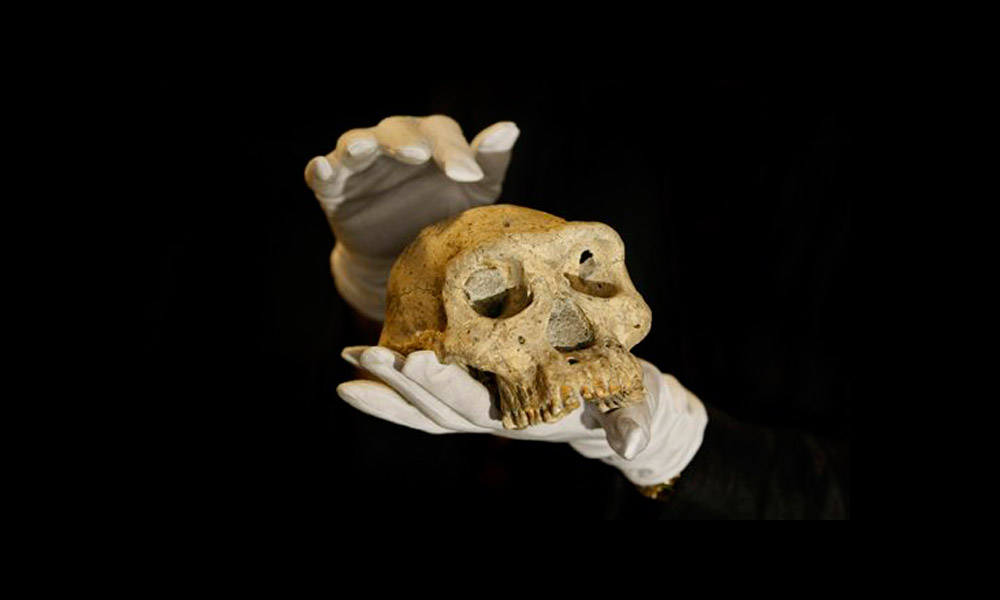 Our family tree may have fewer branches than some believe

The discovery of a 1.8-million-year-old skull of a human ancestor buried under a medieval Georgian village provides a vivid picture of early evolution and indicates our family tree may have fewer branches than some believe, scientists say.

The researchers found the first part of the skull, a large jaw, below a medieval fortress in 2000. Five years later they unearthed the well-preserved skull, gingerly extracted it, putting it into a cloth-lined case and popped champagne. It matched the jaw perfectly. They were probably separated when our ancestor lost a fight with a hungry carnivore, which pulled apart his skull and jaw bones.

The skull was from an adult male just shy of 5 feet (1.5 meters) with a massive jaw and big teeth, but a small brain, implying limited thinking capability, said study co-author Marcia Ponce de Leon of the University of Zurich. It also seems to be the point where legs are getting longer, for walking upright, and smaller hips, she said.

“This is a strange combination of features that we didn’t know before in early Homo,” Ponce de Leon said.

The fossil is the most complete pre-human skull uncovered. With other partial remains previously found at the rural site, it gives researchers the earliest evidence of human ancestors moving out of Africa and spreading north to the rest of the world, according to a study published Thursday in the journal Science.

The skull and other remains offer a glimpse of a population of pre-humans of various sizes living at the same time—something that scientists had not seen before for such an ancient era. This diversity bolsters one of two competing theories about the way our early ancestors evolved, spreading out more like a tree than a bush.

“Danny DeVito, Michael Jordan and Shaquille O’Neal are the same species,” says David Lordkipanidze, director of the Georgia National Museum and the study’s lead author, in order to enable the public comprehend the interpretation of the finds.

For years, some scientists have said humans evolved from only one or two species, much like a tree branches out from a trunk, while others say the process was more like a bush with several offshoots that went nowhere.

Even bush-favoring scientists say these findings show one single species nearly 2 million years ago at the former Soviet republic site. But they disagree that the same conclusion can be said for bones found elsewhere, such as Africa. However, Lordkipanidze and colleagues point out that the skulls found in Georgia are different sizes but considered to be are the same species. So, they reason, it’s likely the various skulls found in different places and times in Africa may not be different species, but variations in one species.

Out of Africa earlier than thought

Nearly all of the previous pre-human discoveries have been fragmented bones, scattered over time and locations—like a smattering of random tweets of our evolutionary history. The findings at Dmanisi are more complete, weaving more of a short story. Before the site was found, the movement from Africa was put at about 1 million years ago.

When examined with the earlier Georgian finds, the skull “shows that this special immigration out of Africa happened much earlier than we thought and a much more primitive group did it,” said study lead author David Lordkipanidze, director of the Georgia National Museum. “This is important to understanding human evolution.”

Tim White of the University of California at Berkeley wasn’t part of the study but praised it as “the first good evidence of what these expanding hominids looked like and what they were doing.”

Fred Spoor at the Max Planck Institute in Germany, a competitor and proponent of a busy family tree with many species disagreed with the study’s overall conclusion, but he lauded the Georgia skull discovery as critical and even beautiful.

“It really shows the process of evolution in action,” he said.

Spoor said it seems to have captured a crucial point in the evolutionary process where our ancestors transitioned from Homo habilis to Homo erectus—although the study authors said that depiction is going a bit too far.